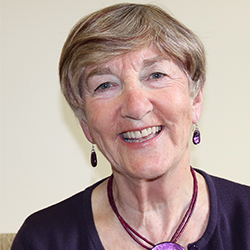 Born in Lancaster, England, Edwina Gateley earned a Teacher’s Degree from her home country, a Master’s in Theology from the Catholic Theological Union in Chicago, and certification as an HIV counselor in Illinois.

After three years working as a volunteer in Uganda, East Africa, Edwina felt called to invite others to offer their services in the developing world. It was the time of Vatican II when the Catholic Church began to open itself to lay involvement and ministry. After 18 months of struggling to receive church support and endorsement, Edwina founded the Volunteer Missionary Movement (VMM) in London, England to recruit, prepare and send women and men to serve in developing countries throughout the world. Since its foundation in 1969, the VMM has sent almost 3,000 lay missioners to serve in 26 countries.

Edwina is currently writing, giving talks and leading retreats nationally and internationally. Her programs include weekends and week-long retreats as well as parish missions. Topics include her own Faith Journey, Discipleship, Women in Scripture, Justice, Mission, Spirituality, Mysticism, and the Feminine Divine.

May our hearts, like Mary's, be open to the new birthing that this holy time of Advent, no matter how dark it is. May we know that God provides for us, walks with us, wonders with us, and waits to fill us with new hope and possibilities.