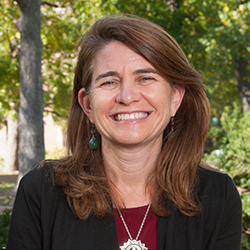 Liz McCloskey is a parishioner at Holy Trinity Catholic Church in Washington, DC where she is a spiritual director, co-facilitates a feminist bible study, and is on the team of the Ignatian Spirituality Project, a nationwide ministry with formerly homelessness people in recovery from addiction. She is one of the founders of the 5 Theses initiative, a set of simple proposals articulated to prompt reform of the Catholic Church.

Recently Liz concluded a three-year position as a visiting scholar at the John C. Danforth Center on Religion and Politics at Washington University in St. Louis. A past president of The Faith & Politics Institute in Washington, DC, she is collaborating with Senator Chris Coons (D-DE) on Profiles in Spirit, a collection of spiritual profiles of current political leaders. Her interest in the intersection of spirituality and leadership took root thirty years ago when a legislative staffer for Senator John C. Danforth. A former columnist for Commonweal, Liz’s writing has also appeared in The Washington Post, The Merton Seasonal, the Kennedy Institute of Ethics Journal, The Journal of Law, Medicine, and Ethics, The Christian Century and elsewhere.

She holds a PhD in Theology and Religious Studies from the Catholic University of America, an M.A. in Religion with a concentration in social ethics from Yale Divinity School, and a bachelor’s degree in Religion and History from the College of William and Mary.

What are the signs in your own life that God is creating something new in you? and who is it that helps you see the signs?