I was in my mid-twenties when Vatican II took place. It was a very exciting and challenging time at our Center.  At that time I was most excited over Dei Verbum, “The Constitution on the Liturgy” (Sacrosanctum Concilium), Ad Gentes and Nostra Aetate, On Non-Christian Religions, and I read them very carefully.

Pope Francis, in his most recent Apostolic Letter “Aperuit illis”,  declared that this third Sunday of Ordinary Time  “is to be devoted to the celebration, study and dissemination of the word of God. (AI.  3).  A day devoted to the Bible should not be seen as a yearly event but rather a year-long event, for we urgently need to grow in our knowledge and love of the Scriptures” (AI, 8). “This Sunday of the Word of God will thus be a fitting part of that time of the year when we are encouraged to strengthen our bonds with the Jewish people and to pray for Christian unity.” (AI.  3).

In our present time anti-Semitism is on the rise in many places and latent supercessionism (the idea that the Gospel fulfills and therefore replaces the Hebrew Scriptures) still manifests itself in homilies and Christian teaching.

To strengthen our bonds with the Jewish people, it a good time to recall the giving of a copy of  The Teaching of Contempt to John XXIII by Jewish historian Jules Isaac prior to the Council.  It provided a significant background and impetus for the eventual promulgation of Nostra Aetate and subsequent documents. Although Nostra Aetate is the shortest, and perhaps one of the most contentious, of the Vatican II documents, it has given birth to a most rich and fruitful Jewish-Christian dialogue which ordinary Jews and Christians need to become more aware of.

The juxtaposition of readings for today’s liturgy features a passage from our Shared Scripture which is paired with a so-called “fulfillment” passage from the Gospel of Matthew.  We need to be aware that “the notion of fulfillment is an extremely complex one.”  And that while  “Christian faith recognizes the fulfillment, in Christ, of the Scriptures . . . it does not understand this fulfillment as a literal one. . .” (PBC, 2001 #21).

The third Sunday in Ordinary Time is also the third Sunday after Epiphany for which the theme of light overcoming darkness is a significant symbol. Light overcoming darkness is also an important theme that runs through the readings for this Sunday’s liturgy.  The Isaiah passage, in its initial introductory statement,  speaks of the people of the land of Zebulan and Napthali, who have experienced the Assyrian incursion and occupation, as having “no gloom” (8:23).

The poem continues describing “the people that walk in darkness,” as having “seen a great light; on the dwellers in the land of gloom light has shown forth” (9:1; AB, 2000). This oracle offers the light of hope  to a people enveloped in darkness; possibly hope in the form of the birth of an heir to the throne: “For a child has been born for us, a son has been given to us” (Isa 9:5; AB, 2000).  This theme of light overcoming darkness is a prominent theme throughout the book of Isaiah.

This oracle was reread, reinterpreted and re-appropriated once again centuries later when, in post-temple Judaism, Matthew cited the passage from Isaiah in his effort to convince fellow Jews that it was in Jesus and his teaching that they would find the “great light” that “has dawned” in the darkness. For Matthew it was in the birth, ministry, death and resurrection of Jesus that humankind would find the dawning of its light, its salvation and its hope.

We ourselves face issues of darkness in our contemporary world---the devastation of the earth our common home, the suffering and death of so many thousands  in war-torn areas and as a result of natural disasters, human trafficking and modern slavery, the rise of hate crimes, and so many others. The poet of Psalm 27 invites us to a more personal appropriation of the light as we make our own the psalmist’s opening cry of faith and profound confidence:

The Lord is my light and my salvation.

Whom shall I fear?

The Lord is my life’s stronghold.

One thing the poet desires, and that is to dwell in God’s house and to behold God’s beauty; or as later in the psalm, in a kind of mystical longing, the poet hears God speaking  through his or her own heart, “seek my face; your face, O Lord, I do seek” (v. 8). We ourselves join the psalmist in this mystical quest for the light of God’s face in the darkness of our present world.

A midrash directs us to another psalm passage where it is God’s word that is designated as “a light”:  “Your word is a lamp to my feet, a light to my path” (Psalm 119:105; Alter). It is through our regular “celebration, study . . . [and contemplation] of  the word of God” that we are nourished and enlightened by constant retelling. reinterpretation and re-appropriation of the story of the God who continues to be our light, our salvation and our stronghold  so that we need not fear the darkness. 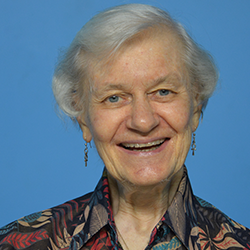 Helen R. Graham, a member of the Congregation of the Maryknoll Sisters since 1956, arrived in the Philippines in September of 1967. After a school year in Datu Piang, Cotabato, a predominantly Muslim area in Mindanao, she returned to Quezon City and began teaching at Maryknoll College and at the Sister Formation Institute which was founded during Vatican II to provide a minimum of theological education for religious women. In 1993 the Institute began to offer degrees in  Religious Studies and became the Institute of Formation and Religious Studies (IFRS).

She writes: Having taught some 52 years at the Institute of Formation and Religious Studies (IFRS), originally founded during Vatican II as the Sister Formation Institute, I have had the constant joy of seeing young religious women (and a few religious men as well!) grow through their two or more years at the Institute. They come from places like mainland China, Myanmar, Vietnam, Kenya, Congo, Brazil etc....as well as the Philippines....and (except for Brazil) they come from very traditional Catholic backgrounds and their time with us opens their eyes and expands their theological and biblical horizons. My greatest joy is to have students become my colleagues sitting on the same platform with me in various public events, for example: a PhD in Biblical Studies from Catholic U in Washington is teaching in seminaries in China, and twin PhDs (one in OT and the other in NT) are teaching in universities here in the Philippines, and a PhD in Spirituality is my colleague at IFRS and has served as my dean for six years etc.

Over the years Helen has also taught at various Major Seminaries and Schools of  Theology both in Mindanao and Quezon City. During Martial Law in the Philippines (1972-1986) Sister Helen became co-founder of the Task Force Detainees, a mission partner of the Association of Major Superiors of the Philippines, which was involved in visiting political detainees, helping their families, and recording accounts of torture and disappearances.

She writes that she has been extremely blessed to have been able to attend four one-month intensive studies of a particular book of the Torah at the Bat Kol Institute in Jerusalem which was founded, in response to Nostra Aetate, by Sister Maureena Fritz, a sister of Sion. The professors were rabbis as well as Christian teachers. She says, “My most moving experience was the special study we had of Teshuva  (Repentance) which took place in Jerusalem during the High Holy Days in 2009. Aside from our formal classes in Teshuva from Talmudic, midrashic, psalmic, liturgical etc. perspectives, we spent Rosh Hashanah and Yom Kippur at Hebrew Union Synagogue just overlooking Jaffa Gate. It was one of the highlights of my spiritual life.”

Sister Helen continues to teach Sacred Scripture in the Philippines today, as well as to conduct evening Bible study groups, workshops and seminars in the Philippines and other parts of the world, which she has been doing since 1984.