Our Gospel starts with a short, powerful proclamation from Jesus. “Today, this Scripture passage is fulfilled in your hearing.” Clearly, we need some context. What Scripture passage and in whose hearing? For answers, we can look to last week’s Gospel.

In that reading, Jesus arrived in Nazareth, his hometown, and went to the synagogue on the sabbath. No doubt, people there had heard the stories of the miracles Jesus performed in other towns. Imagine their excitement as he stood up to readand was handed the scroll of the prophet Isaiah. He unrolled the scroll and found the passage where it was written:

“The Spirit of the Lord is upon me,because he has anointed me to bring glad tidings to the poor.He has sent me to proclaim liberty to captives and recovery of sight to the blind, to let the oppressed go free,and to proclaim a year acceptable to the Lord.”

Rolling up the scroll, Jesus handed it back to the attendant and, Luke tells us, sat down with the eyes of all in the synagogue intently on him.This is the point at which our reading begins, when Jesus says, “Today this Scripture passage is fulfilled in your hearing.” Now we understand: the Scripture is from Isaiah and the audience is people in Jesus’ hometown synagogue. And what is the initial reaction of those people? Luke says “All spoke highly of him and were amazed at the gracious words that came from his mouth.”

This must have been an affirming moment for Jesus and he could have stopped there. He knew the sayings about prophets not being accepted in their hometowns and physicians healing themselves. Why not let the praise sink in? Yet, Jesus felt compelled to continue, to speak a hard truth, and when he did the same people who had been amazed at his gracious words, Luke tells us, “rose up, drove him out of the town, and led him to the top of the hill to hurl him down headlong.” In other words, to kill him.

What happened between the peak of amazement and the edge of violence? What truth did he speak to fuel such anger?

Basically, in a few verses, Jesus exposed the prejudices and biases of those gathered in the synagogue. He reminded them that their own prophet Elijah had to seek refuge with a foreign woman, a widow from Zaraphath, because Elijah was not welcome in Israel. And that their own prophet Elisha healed the foreigner Namaan of his leprosy even though Elisha did not cure Israelites of their leprosy.

In so many words, Jesus was saying, “When I talk about God freeing the oppressed and giving sight to the blind, I’m talking about God blessing the people you avoid, the people you don’t want to be near, those you call “enemies.” No wonder the people in the synagogue were so angry they wanted to kill Jesus.

Yet, Jesus was doing just what he was anointed to do. He was opening the eyes of those before him to their racism and nationalism. He was trying to set them free of their captivity, reminding them that God’s love extends to everyone – and so should theirs.

What are weto take from this Gospel? While we are not likely to physically harm someone who speaks an uncomfortable truth, we are called to face our own prejudices and biases. Perhaps we tune out unwanted voices, or close our eyes to the “other,” or build walls of all kinds to keep out those who are unlike us.

Jesus seeks to restore our sight and to release us from whatever holds us captive. Because we too are anointed to bring glad tidings to the poor, proclaim liberty to captives, recovery of sight to the blind, and set free the oppressed. 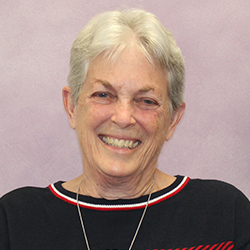 Louise is a native of Baltimore who entered the Sisters of Charity of Cincinnati at age 35. In her journey as a daughter of Elizabeth Seton, Louise has ministered as a chaplain, mission leader, professor, and medical ethicist in Albuquerque, Colorado Springs, St. Louis, Baltimore, and now Cincinnati. She earned a Master’s in Theology (St. Mary’s Ecumenical Institute in Baltimore) and PhD in Health Care Ethics (St. Louis University). To her surprise, she was elected to the Leadership Council of her congregation in 2011 and is currently serving a second term. Her particular areas of leadership include Associates, Peace and Justice, and EarthConnection. Brief experiences in Cuba, Mexico, Guatemala and El Salvador have widened her horizons and perspectives. She has a passion for social justice and the inclusion of women in all the ministries of the Church. She lives with two of her congregation’s newest members at Visitation House, an intentional community committed to radical hospitality. Most of her family members live in Baltimore and she visits every chance she gets.