Today’s readings from the book of Leviticus and the Gospel of Mark invite us to consider the historical contexts in which people were labeled “unclean”; the legal prescription for Biblical Leprosy; and the personal and social consequences of that label for the men who were declared lepers. Then in a perfect juxtaposition to this matter, Paul’s letter to the Corinthians, instructs the community to stay focused on the Glory of God in all they are and do... avoid giving offense … be imitators of Christ.

First, I would like to provide a little background to the diagnosis of Biblical Leprosy, a disfiguring skin disease of Ancient Mesopotamia that carried with it severe personal and social consequences because it was believed to be highly contagious, and stigmatizing (even though 3,000 years later science would eventually prove this skin disease to be a bacterial infection, not easily contracted).  Nonetheless, in the book of Leviticus, the Law of Moses and Aaron prescribed that men who were diagnosed with biblical leprosy:

Announce “Unclean, Unclean” wherever they went

And live outside the city—in isolation

If the afflicted man experienced healing they had to perform ritual acts of purification and animal sacrifices that would restore them to the community.  But no leper escaped the prescribed acts of shame and isolation.  The leper was the outcast.

In Mark’s account, it’s safe to say that Jesus knew something of the man who meets him out on the outskirts of town, along the way, so to speak and who begs him, kneeling, and says: “If you choose, you can make me clean.”

We are told that Jesus is moved with pity and that touches the leper—making physical contact Jesus establishes a connection with the outcast.  He restores this man’s bodily integrity and says to him:

“I do choose, be made clean!” -- but go and show yourself to the priest and follow the prescription of the law of Moses.

Jesus also warns him sternly, “See that you tell no one anything, but go and show yourself to the priest, and offer, for your cleansing, what Moses prescribed.”

More often than not, when we hear this Gospel we tend to focus on Jesus’s compassion toward the leper, and how moved with pity he reaches out to touch the outcast and —and he chooses to restore the leper and make him clean.  But this time, as we prepare to enter into the Lenten journey, I would like to invite us all to consider the consequences of the actions of the leper against the backdrop of the 2nd reading from Paul’s letter to the Corinthians which begins with the message: “Do everything for the Glory of God.”

In this reading, I find it utterly ironic that the man who was outcast-- whose bodily integrity is restored-- completely ignores his legal obligation according to the Law of Moses and Aaron and his moral obligation to keep the matter of his healing confidential, resulting in Jesus becoming the one who has to stay in the outskirts of town. The man’s inability or unwillingness to keep confidence made it impossible for Jesus to walk around openly.  The lack of gratitude shown by the leper and his callous behavior yields such irony!  The outcast is made clean and finds his way back into the community; meanwhile Jesus who chose to make him well is rendered the outcast.  The Hero becomes the victim.

As we prepare ourselves for this Lenten journey, perhaps we can hold in tension the message of these readings and reflect upon how we might find greater authenticity in our lives so that, as Paul proclaims, we might give Glory to God in all that we are do… so that we may neither offend Jew or Greek, or Church.

Last week, I saw a car with a “My Family” Sticker that depicted an AK47, a shotgun, an oozie, and two rifles. It also had a “Choose Life”, license plate and there was a rosary hanging from the rear-view mirror.

I took a picture of the back of this car and posted it on my Facebook page with the question:  “What is wrong with this picture?”  Most of my friends responded with shock and outrage at the inconsistency and hypocrisy.  But one person replied:  NO HYPOCRICY:  Defending the developing fetus, beating heart, ergo human; and defending our 2nd amendment right to protect ourselves from the animals who want to take our life away—NO HYPOCRICY.   Yet, in fact as St. Paul reminds in the letter to the Corinthians, avoid giving offence to Jew or Greek—to the Religious or the Secular—avoid giving offence to the Church—which in fact requires that we maintain a consistent ethic of life.

No Hypocrisy requires that the outcome of all of our actions give no offence to God or to one another—and more importantly that our actions glorify God—in short, that like Paul we be imitators of Christ.  This Lent instead of giving up chocolate or beer or some other consumable “sacrifice”, why don’t we commit to engaging in actions that Glorify God—every day.  Let’s work on being consistent in affirming a consistent ethic of life.  Let’s make this our Lenten commitment—

May Christ’s Peace be with us all. 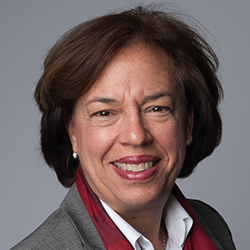 Dr Miranda is Associate Professor of Practical Theology and Director of Ministerial Formation at Barry University in Miami Shores, FL.  She served as President of the Association of Catholic Hispanic Theologians of the United States and since then has been committed to promoting theological discourse and dialogue across cultural and disciplinary boundaries.  Dr. Miranda is also the founder of the Cuban Evolution Foundation Inc., whose mission is to promote human dignity and critical consciousness through education, the arts and Christian ministerial praxis.  Through her personal and professional life, Dr. Miranda seeks to intersect sacred narrative with quotidian reality.  She hopes that through her work, relationships and commitments others are inspired to work for the greater good.