Do you remember “Seek and Find” books, where you search for an object like a comb, a starfish, or a bobby pin in what looks like a collage of objects? My preschool daughter loves these books, though hers revolve around Minnie Mouse and other Disney characters. Finding the hidden objects for the first time might be challenging, but after that, it is a snap for her. Now when she opens the pages to the book, she can immediately point to the hidden pictures.  The objects seem so obvious now it’s hard not to imagine finding them.

I had a similar experience with today’s first reading from Genesis, the familiar story of God placing the rainbow in the sky as a promise to Noah to never flood the earth again. When I was invited to preach for today, one suggestion was to reflect on how in this reading the covenant incorporated not just Noah and his human family but all living creatures. That, in all of my Catholic upbringing, was not something I had noticed. I had always thought the rainbow was for us humans.

Of course, once I read the passage through that lens, it was impossible not to see that all living creatures were included in God’s plan for salvation. This is actually emphasized four times that God has made a covenant with all of creation, “all the birds, and the various tame and wild animals.” Indeed the passage is a beautiful reminder of how deeply interconnected we are with all living beings, human and non-human. All creatures are seen with love in the eyes of God, enough for them to be mentioned by name in this covenanted relationship that we remember every time we see a bow in the sky.

And we know that God has kept God’s promise. And we also know that again the seas are rising, but this time it is because we have not kept our part of the covenant in honoring the gift of creation. Due to the burning of fossil fuels for transportation and houses and our overconsumption of the natural resources for food and development, we have shifted the balance of our earth and as a result the climate is warming, ice caps are melting, and seas are rising. And those most impacted are those who least contributed. People from island nations like Tuvalu, Fiji, and as we’ve seen here in Puerto Rico, are being forced to flee, like Noah, due to the encroaching tides or the destruction caused by natural disasters.  And this time it is not due to God, but because we have broken our covenant with God and with all creation.

If we look deep within our hearts, we all can probably admit that we are complicit in this sin of harming creation. Whether it’s the exhaust from our cars, or owning more things than we need or simply not being aware of all the minor and major ways our lifestyles impact people and the environment miles away.  Sigh… Yes, it is good to acknowledge our sin, but we don’t need to fall into a guilt trip. Instead, we might consider awareness of the ways that we have fallen short in caring for creation as a wake up call, for personal, ecological conversion.

The Jesuit priest Anthony de Mello once wrote, "Be grateful for your sins. They are carriers of grace."

"Be grateful for your sins. They are carriers of grace."

In his encyclical Laudato Si’: On Care for our Common Home, Pope Francis says that “The external deserts in the world are growing, because the internal deserts have become so vast”. (Laudato Si, 217).

We are, as the old country song goes, “Looking to find love in all the wrong places.”  Many of us get caught up in “retail therapy” and get roped in the consumer culture, which then leads to the overconsumption of our natural resources.

The antidote, Pope Francis further says in Laudato Si’ is that “We need to take up an ancient lesson, found in different religious traditions and also in the Bible. It is the conviction that “less is more”. A constant flood of new consumer goods can baffle the heart and prevent us from cherishing each thing and each moment. To be serenely present to each reality, however small it may be, opens us to much greater horizons of understanding and personal fulfilment...It is a return to that simplicity which allows us to stop and appreciate the small things, to be grateful for the opportunities which life affords us, to be spiritually detached from what we possess, and not to succumb to sadness for what we lack.” (LS 222)

Pope Francis is speaking of a desert spirituality-one of simplicity-where just like Jesus our dependence is on the angels and God, and not on our own possessions. It is an invitation of trust. Of simplicity. It is also a perfect invitation for Lent.

To take up the ancient lesson that less is more.

To stop and appreciate the small things.

To be spiritually detached from what we possess.

To not succumb to sadness for what we lack.

You might consider slowing down, not buying anything unnecessary over Lent, eating less meat (not just on Friday’s!), taking more time to pray in nature, to look at the ways, especially using our digital devices, that we might distract ourselves from just living the present moment, to eat out less and instead use that money to give to a local charity or environmental group.

This desert spirituality, is actually not only a path to better fulfill our covenant with creation and with God, it is also a path of true joy and contentment. This antidote isn’t just good for the environment, it’s also good for the soul.

In an article in the Greater Good Science Center titled “Why Lent Makes People Happy (and Netflix Doesn’t)” it reports of a study that gathered a bunch of people at the beginning of the week and asked them to eat chocolate at the end of the week. Now some of the people were told not to eat any chocolate, others were told to eat as much chocolate as they desired, and a third group wasn’t given any instructions.

So guess who was the happiest at the end of the week when they ate the chocolate? Yes, the ones who were told to fast from chocolate.

And the people who had been eating chocolate to their heart’s desire?

“In fact, the article reports, “the bingers reported feeling less happy after their end-of-week chocolate than they’d felt after eating their piece at the start of the week.”

Lent is a time to enter the desert. To enter into a time of simplicity. Of paring down what we accumulate and what we want. And to rest in the truth that God will always provide exactly what we need.

This, indeed, is the grace needed for our planet. And also for ourselves. 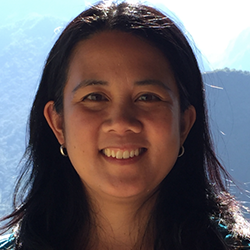 Christina Leañ​o serves as the Associate Director of the Global Catholic Climate Movement, an international network of over 650 Catholic institutions and thousands of individuals turningPope Francis’ Laudato Si encyclical into action for climate justice, by undergoing our own ecological conversion, transforming our lifestyles and calling for bold public policies together with the wider climate movement. Christina is also a retreat leader and meditation teacher who is passionate about engaging the intersection of contemplative practice and social justice. She holds degrees from Yale University and the Graduate Theological Union in Berkeley. She lives in Boston with her partner Steffano and daughter Malaya Clare.