John took extra care introducing this story of the Samaritan Woman at the Well. In fact, in the verse that precedes this reading from the Gospel, John says that Jesus had to pass through Samaria. That is unusual, as normally the Jewish people would do all they could to avoid Samaria. There was such tension between the Jewish people and the Samaritans Jesus used them as an example in the parable of the Good Samaritan. Instead of following that which the community expected, Jesus purposely sought a path through this area. He purposely put himself at this well at an unusual time of day – in the heat of the noonday sun.

Now, while Jesus was seeking something out, on the other side of this, the woman was probably seeking to avoid everyone and for understandable reasons. As the story tells us, she had five husbands and the man she was living with now was not her husband. In that time and that place that would be more than enough reason for the community to ostracize her. As we can infer, because she was there at the well at noon, instead of going early in the morning with the other women in the village likely would have been. So this woman, who is likely trying to avoid everyone, to make this chore as easy as possible instead encounters this strange man. He starts a conversation with her. He asks her questions. He listens to what she says. He asks her questions so she can explain about who she is, about what she believes, about what she needs. He listens. He offers her living water. He offers her eternal life.

This is such a transformative experience for her that she runs back to the very town to the very people who have ostracized her, for who knows how long. She goes to those people who have not bothered to hear her voice for years and suddenly they are listening to what she has to say. She goes to those very people who tried to ignore her presence for years, but suddenly are seeing a woman transformed. By what they heard and what they saw, they are intrigued. Her testimony brings the entire town to encounter Jesus. Through her transformation, an entire town is transformed.

But I only lesson for us in this story. I don’t think that is the only person with whom we are challenged to identify.

In fact, I think we need consider whether we are the townspeople - whether we are the ones pushing people away because the lives they are living don’t look or sound like the lives we think they should be. That people who are living lives by choice or by circumstances have them believing or behaving in ways that outside what we consider the norm. That we ostracize them.

Often at this time of year, I think about a young woman I got to know when I worked in a parish. She was coming through the RCIA process I oversaw and she had two small children, an infant and a toddler. They were delightful, and incredibly high energy. Unsurprisingly at Mass, they would often be a little noisy and the toddler would be hard to contain when she was also holding an infant. People unfortunately gave her those looks, shooting her glances of judgement as to why a single mother was in their midst. It broke my heart. As I got to know her and listen to her story over that year, I learned so much about her journey and about God.

That is part of what this story challenges us to do – is to acknowledge that we more often than we see, because it is often inadvertent, push people away. We ostracize individuals, groups. The story reminds us that we have to, as Jesus did, intentionally go out of ourselves. Go out of our parishes. Out of the comfort what is our normal – to find the ostracized and to talk with them. To ask them questions and to listen to their answers. To acknowledge and celebrate their joys. To acknowledge and grieve the tragedies in their lives. To invite them into our communities and to walk with them, so they recognize that they truly belong as God wills it. 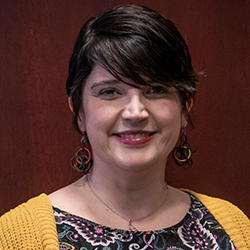 Jennifer Delvaux has served the Church through pastoral ministry for over fifteen years. For over a decade she enjoyed the adventure of accompanying teens and young adults on their faith journeys. Beyond the usual calendar of youth groups and retreats, this included several World Youth Day pilgrimages, service learning trips to Guatemala, and the challenge of pastoral care to youth facing tragedies and health concerns.

The opportunity arose to step into the role of Director of Formation at Holy Name Cathedral in Chicago where she served for several years walking with the RCIA process, baptismal preparation, adult formation, young adult ministry, and women’s ministry. In 2017, Jennifer joined the Archdiocese of Chicago’s Office for Evangelization and Missionary Discipleship. Now, as Senior Coordinator, she supports parishes in the efforts to develop a culture of evangelization and missionary disciples.

In addition, Jennifer was honored to attend Pontifical Council for the Laity’s 10th Annual Youth Forum in 2010 and the Called to Witness Program through Catholic Relief Services in 2014 to Rwanda. She also served on the Executive Board for the National Catholic Young Adult Ministry Association from 2008-2014.

Jennifer enjoys ministry outside of her workplace including offering retreats and Theology on Tap talks. She enjoys these opportunities to enter in to conversation with others about faith, social justice, science fiction, the experience of the feminine in the Church, and especially breaking open the scriptures.

In her free time Jennifer has a deep love of baking and a tendency to drink too much (fair trade) coffee. When Chicago weather allows, Jennifer enjoys exploring the city, hiking through Morton Arboretum.