At the coast of Turkey, Qusai contemplated the terrifying black waters into which the human smugglers had just ditched his wheelchair because he couldn’t afford to pay for its place on the crammed boat. “Maybe I’ll make it, maybe not. I don’t care, this is my last chance. No way back.” Qusai survived – just. He is a severely disabled young man who escaped the war in Syria, taking the only way available to most refugees in the world today:  extremely risky journeys along so-called “illegal pathways” through treacherous seas, deserts and mountains, pathways controlled by human smugglers and traffickers for whom refugees are like merchandise.

Qusai endured hours in the eastern Mediterranean Sea in an overcrowded dinghy and eventually landed on an island in Greece. He very nearly didn’t make it. His minute size and inability to move unaided meant he was nearly swamped by waves and suffocated. He recalls: “After one hour, the water was up to my chest. I can’t tell you how cold it was. It went into my bones.” During the agonizing journey, Qusai sustained three fractures to his brittle bones.

Qusai is one of hundreds of refugees who shared their story with me during my work with the Jesuit Refugee Service. The memories of their journeys, where they risked life – ironically – in order to find life,  lose nothing of the horror and fear with time. They are reminiscent of the fear we hear about in today’s readings. Like those the Psalmist describes, who sailed the deep waters of the sea, and encountered waves that “mounted up to heaven” and “sank to the depths”,so that “their hearts melted away in their plight” and “they cried to the LORD in their distress.” And like the panicked disciples of Jesus in the Gospel, who wake him up when a storm hits their boat: “Teacher, do you not care that we are perishing?”

The protagonists in the readings are lucky. Divine intervention/God rescues them. The wind ceases or is hushed to a gentle breeze and the sea calms. This is the fate of some refugees: they make it, they survive, and they rejoice and give thanks to God and wonder at his works.

Many others are not so fortunate. Another refugee I met, who came from Ivory Coast, let’s call him Amadou, left Libya in a thirty-foot zodiac crammed with 150 people. They attempted to cross one of the deadliest sea routes in the world. This is the route in the Central Mediterranean Sea, with Libya at one end and Italy on the other. More than 18,500 deaths have been recorded along this route since 2014. These grim statistics are only the tip of the iceberg: who knows in reality how many people died anonymously and are lost forever in what has become a mass graveyard? Thirty-six of Amadou’s fellow travellers died during the three-day voyage. The sea got very rough and the dinghy sank. “I could do nothing except save myself,” he said. “Luckily, I could swim. It was so sad to hear people screaming for help. Some started to swim but didn’t make it. They gave up because they were too tired.”

When Jesus rebukes the sea and the wind, he asks the disciples: “Why are you terrified? Do you not yet have faith?”The refugees I met have an impressively deep faith in God who directs their life.

“I thought I was finished but God saved me. He said, “You come here alive.”

“I am here because the good God wants me to be here. I could have died.”

“I knew I would survive, if it is His will, because He alone holds your fate in His hands.”

I have lost count of the amount of times I have heard affirmations like this. In the grip of terrible suffering, the refugees get consolation from this sure knowledge that God is looking out for them.  Their faith is humbling and impressive, both. Ultimately, however, they hope not only in the mercy and compassion of God Almighty but also in the mercy and compassion of their fellow human beings. It is this hope that propels them to go on those boats, to risk dying to live.

Sometimes their faith and hope is justified. Just think of the rescue ships run by NGOs in the Mediterranean Sea who save so many refugees who end up in deep trouble in its waters. But too often the faith of refugees is cruelly disappointed. They are badly let down. Just think about the European governments who criminalise the efforts of those rescue ships and prevent them from doing their lifesaving work.

Recent reports suggest an increase of deaths of refugees attempting to reach Europe, deaths that are directly or indirectly linked to the approach of the European Union that aims to close all its doors, especially since the introduction of partial or complete border closures to halt the outbreak of coronavirus. So we have European coastguards that frequently ignore mayday calls from migrant boats in distress or refuse to rescue them.

Such policy decisions, which make a deliberate choice to allow our brothers and sisters to drown, are the antithesis of the solidarity that Pope Francis calls us to. Each of us is called to be his brothers’ and sisters’ keepers, to hear God when he calls and says: “Where is your brother?” These were the scriptural words that Pope Francis quoted on the island of Lampedusa, some eight years ago, when he lamented the deaths of countless refugees who had drowned in the Mediterranean Sea. Pope Francis was very clear that day: “Where is your brother? The voice of his blood cries out to me. This question is not a question addressed to others. It is a question addressed to me, to you, to each of us.”

Because, to close with the definition of St JPII of solidarity, in the end we are all really responsible for all. 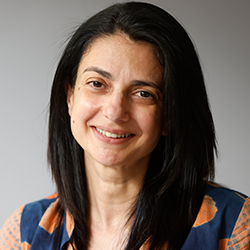 Danielle Vella is Director of Reconciliation Programs for the Jesuit Refugee Service (JRS), an international humanitarian organization that serves refugees in more than 50 countries worldwide. A journalist, Danielle has also served as publications coordinator for JRS, and has written extensively about the experiences of refugees struggling to find a new life and future. Her work includes Journeys of Hope – Stories of refugees on the way to Europe (JRS Europe, 2016); Rescued, What’s next? – Protection seekers stranded in Sicily (JRS Europe, 2015); and Beyond Imagination – Asylum seekers testify to life in Libya (JRS Malta, 2014). One of Danielle’s most recent projects was writing Dying to Live: Stories from Refugees on the Road to Freedom, which was published by Rowman & Littlefield in February 2020. To interview refugees to share their stories, Danielle travelled extensively in Europe, sub-Saharan Africa, Asia, the Middle East and the United States. Her work has taken her to remote refugee camps, to land borders, to the seashore where migrant boats arrive, to immigration detention centres, and even to war zones