Today’s reading from 2 Peter evokes the voice of the long dead apostle. Recalling first the glorious mountain vision, the heavenly voice, he goes on to remind the readers: “We have more firmly the prophetic word, to which you do well to attend, as to a lamp shining in a dark place, until the day dawns and the daystar rises in your hearts” (2 Pet 1:19).

The feast of the transfiguration is a feast of visionary hope, a glimpse of what is not yet, showing itself as already present. The splendor revealed to the three disciples on the mountain is  the beginning of multiple fulfillments and promises. Immediately before the transfiguration in the Gospel, Jesus makes a promise that at first reading seems unfulfilled. To hearers stunned by the passion prediction and warnings of the cost of discipleship (Matt 16:21-27), Jesus promises that some of them would live to see “the Son of Man coming in his kingdom (16:28). Yet some see exactly that, and at once: these three, awed, confused and silenced as they are. What they see is a foretaste of the resurrection, when silence will be replaced by the proclamation that “the Son of Man is risen from the dead” (Matt 17:9) through the visions and testimony of the witnesses: first the two Marys, then the eleven, then all readers and all hearers of the Gospel, “until the completion of the age” (Matt 28:9-10, 16-20).

And Jesus’ resurrection itself is a beginning, the “first fruits of those who have fallen asleep” (1 Cor 15:20). The transfiguration, like the feast of the assumption, celebrates the promise of human solidarity in transformation: what has happened to Jesus will happen also to us. The feast of the transfiguration speaks to me most strongly of this hope, for this day was the earthly birthday of my late friend and theological colleague Catherine Mowry LaCugna. This feast, then, is a beacon guiding us from and to the vision of God’s glory that we have glimpsed in living human beings (cf. Irenaeus Adv Haer 4.20.7), toward a communion of saints now as the daystar rises in our hearts and finally in the fullness of day.

But the transfiguration offers visions of hope also for our eschatological present, the time between the resurrection of Jesus and the transformation of the world. Its key is the recognition that the “Son of Man” of the Gospels is also the “Son of Man,” the human figure, of Daniel’s dream. Daniel’s vision comes from a very dark place; it begins as a nightmare of monsters, beasts of hybrid parts, embodying the confusion and horror of the successive empires of the ancient world: their wars of conquest, their exploitation of colonies, their projects of cultural dominance that had formed the world the Jews of the second century BCE endured (Dan 7:1-8, 15-25).  Like the beasts, the “one like a son of man,” is not just a ruler, but a reign, an empire: the one like a son of man, the reign of God and of the saints. Daniel envisions the monstrous empires falling away before a reign with a human face (7:9-14, 26-27) .

Jesus and the women and men who were his companions in the reign of God movement lived under yet another plundering empire, another regime under which untold numbers of Jewish women and men were crucified, enslaved, excluded from political rights, exiled, targeted by xenophobia, subjected to violence and abuse, so some few could prosper. In this context, Jesus and his companions preached a reign in which the hungry are fed, the sick healed, the afflicted comforted, the prisoners set free, and there is constant good news for the poor, news of freedom, justice and mercy for all. Like many others, Jesus died at the hands of Rome, condemned in the Roman imperial self-interest.

Ours is another dark time, when work toward justice and mercy is under threat, and efforts for the relief and consolation of refugees, migrants, the sick and disabled, the aging and frail, the very young, women and children lacking prenatal care, women and children threatened by famine and war, men, women and children imprisoned unjustly or long beyond justice, all, all are under direct assault. The victory and reign of the human figure of Daniel, the “son of man” of Matthew, seem very far away. Yet the vision of God’s reign is a reminder that God’s great good news is for the multitudes in this world as well as the next. The transfiguration pushes us to hope and commitment: the lamp of our saints and heroes, of the prophetic word, of the dawning vision shining in a dark place, pulling us forward until the day breaks and the daystar rises in our hearts. 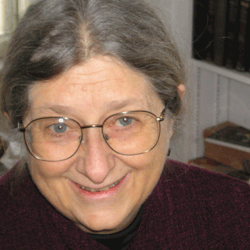 Mary R. D’Angelo is Professor Emerita at the University of Notre Dame. She lectures and writes on New Testament, Christian Origins and Women’s Studies. Her areas of interest are women and gender in antiquity, ancient Jewish and Christian exegesis, and imperial politics as a context of ancient Jewish and Christian writings, as well as the contemporary use of scripture in liturgy and spirituality. She is the author of Moses in the Letter to the Hebrews. With Ross S. Kraemer she was co-editor of and a major contributor to Women and Christian Origins; with Anne Anderson, she co-edited Crossroads in Christology: Essays in Honor of Ellen Leonard. She has published numerous articles in scholarly and pastoral books and journals. Her current projects include a feminist commentary on 1 Corinthians and a project investigating Roman imperial moral propaganda as a context of Jewish and Christian “family values,” an endeavor that  has been supported by a Luce Theological Fellowship and a National Endowment for the Humanities Fellowship. She served on the editorial board of Journal of Biblical Literature for twelve years and on the board of the Catholic Biblical Quarterly for six years. She was the recipient of a Mentoring Award from the Society of Biblical Literature Committee on the Status of Women in the Profession in 2005.