I have the privilege of animating the Church’s call to end the death penalty and promote restorative justice through my work at Catholic Mobilizing Network. At the heart of this ministry and these movements is the belief that each person is a child of God with inherent worth and dignity.

In today’s Gospel parables, Jesus tells a story to show how God intends for everything that is lost to be recovered. That goes for sheep, coins and even one’s fallen away son. And we see that God delights when what was lost is recovered.

There is no mistaking that God has entrusted us with a message of reconciliation, especially in our relationships that are broken and damaged.

The parable of the Prodigal son offers wisdom and piques our imagination about the steps necessary to reconcile.

Most of us know this story: The Prodigal son leaves town for a life of squandering. The brokenhearted Father waits for his return, and the Elder brother wrestles with deep resentment and anger in his heart. But could it be that hearing this story today opens new, reconciling ways for us to respond to the hurt in our lives?

Rembrandt painted a captivating picture called the Return of the Prodigal Son and his art stimulates our curiosity about the backstory of its characters.

The painting captures the moment when the Prodigal Son and his Father are reconciled. In stunning detail, the Father embraces the Prodigal son, touching his shoulders to bring him closer. The Father recognizes his son’s failings yet sees beyond his sinful behavior and focuses on his son’s dignity. Sr. Helen Prejean, a legendary anti-death penalty leader says “people are more than the worst thing they have ever done in their lives.” God--modeled by the Father in the parable--affirms this truth: that no one is beyond redemption or excluded from God’s love.

In this moment of reconciliation, the son receives his Father’s boundless mercy. Rembrandt captures how God the Father rejoices in recovering what is lost. Indeed, this parable can offer us a healing balm for our soul -- reminding us that our sins can be forgiven.

Yet there is also more to this story -- consider the reaction represented by the Elder brother. The parable doesn’t say what happens between the brothers; but we are led to believe they are a long way from reconciliation.

In Rembrandt’s painting, the Elder Brother stands to the side, in a posture of unrelenting judgement. Maybe the Elder brother needs a way to express the depth of his own anger and abandonment. His reaction reminds us that the human process of reconciliation isn’t simple. Even in cases where reconciliation may be possible, actual forgiveness may not come until much later. Forgiveness that is forced risks re-victimizing those who have experienced harm.  There are no quick fixes to repairing broken relationships. Reconciliation often requires a journey of many steps.

Consider also that this story unfolds within a human community and, undoubtedly, many unnamed characters have also been impacted by the son’s actions. Harm impacts not only individuals but a web of relationships, in families and communities. So what can be done to make things right for everyone impacted? What is needed to repair these damaged relationships? And how can the wider community be a part of that process?

This Gospel story offers insights into restorative justice -- a way of understanding and responding to harm through the lens of the people and relationships that are impacted, rather than focusing exclusively on a “law” that has been broken. It’s core tenet is that people can be restored and redeemed. Restorative practices can help us live out our Catholic faith; involving victims and those most directly impacted by a harm so they can be part of moving forward in a life-giving way.

Through listening to stories of murder victim family members I am reminded of the power of reconciliation and that forgiveness is indeed a life-long journey. My friends Vicki & Syl Schieber lost their daughter Shannon in 1998. Shannon was raped and murdered while finishing her first year of graduate school.

Their suffering was unimaginable; yet they chose to respond in a restorative way. In the spirit of reconciliation, Vicki & Syl have taken courageous steps to ensure that their pain does not result in more suffering. They learned the death penalty does not help heal and is not the way to pursue “justice” for Shannon. For decades, the Schiebers shared their story about forgiveness so that others might also find a path toward healing.

The story of the Prodigal Son reminds us that we are all called, in whatever ways reconciliation may be necessary in our lives -- whether we resemble the father, the elder brother, or the prodigal son himself. We are called to take one step, then another, on our journeys to recover what is lost and transform damaged relationships. Reconciling isn’t about forgetting the hurt, it’s about us finding new ways to model God’s boundless mercy. 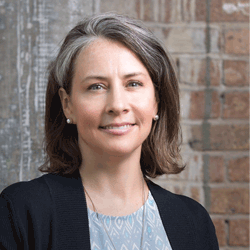 Krisanne is the Executive Director of Catholic Mobilizing Network, a national organization that mobilizes Catholics and all people of goodwill to value life over death, to end the use of the death penalty, to transform the U.S. criminal justice system from punitive to restorative, and to build capacity in U.S. society to engage in restorative practices.

Krisanne previously served for more than a decade as senior church relations staff at Bread for the World, a collective Christian voice urging our nation’s decision makers to end hunger at home and abroad. She is co-author of Advocating for Justice: An Evangelical Vision for Transforming Systems and Structures published by Baker Books in June 2016.  She is also adjunct teaching faculty at Eastern University’s Graduate School of Leadership and Development in St. David’s, Pennsylvania.

‍
Krisanne is invited to speak regularly, including for Krakow in the Capitol, a 2016 World Youth Day event in hosted in the nation’s capital, Theology on Tap and for Love is Our Mission: Poverty, produced by Catholic Apostolate Center, September 2015.

From 2003 to 2005, Krisanne served as the Executive Director of Witness for Peace, a politically independent, faith-based national grassroots organization committed to promoting peace, justice, and non-violence in U.S. foreign policy. In the late 90’s Krisanne was an associate with the Latin America Working Group, one of the nation's longest standing religious coalitions dedicated to a just foreign policy in the region. She had a special focus on labor rights and corporate responsibility.  In 1994, Krisanne served for a year in a faith-based domestic service program working alongside migrant farmworkers in Woodburn, Oregon.

She has a Master in Theology degree from the Weston Jesuit School of Theology in Cambridge, Massachusetts.  Krisanne and her husband Jay reside in Washington, DC with their three children.