When I was a kid, I often got lost in imagination. I dreamed of living in a grand hotel in a big city where, of course, I would be rich and famous. I watch my own children today, ages 9 and 8, and I see that not much has changed.

The scene in today’s Gospel passage is not much different. What an image of the messianic banquet James and John must have conjured in their heads when they saw themselves seated at the right and left of Jesus in his glory.

And they actually believed in their wish enough to believe that Jesus would grant it!

As I got older, I realized no matter how hard I wished, or prayed, I couldn’t change the reality of my disability. So I did the next best thing. I did everything I could to make myself and others forget I had cp. I tried to hide it or distract from it. There was an image in my head of how I wanted to be how I thought I was supposed to be –– and cp was not a part of it. I prayed that no one would ask me about it or even mention it, and I never, ever talked about it, or told anyone how much it hurt.

Except for my mother. Sitting with her alone, at a kitchen table just like this one, I felt safe and loved and secure enough to tell the truth. For years it was the only place, and she was the only person who knew the whole truth.

Today I know the truth, and I share it often. Any shame I experience around my disability is a lie. It’s the result of living in a world that says appearances and perceptions, human standards of greatness, matter most.

But I only learned the truth because I had a safe place to tell the truth. Since I knew there was nothing I could say or do that would separate me from my mother’s love, I could practice honesty. With her, there was no need to imagine or portray a reality that didn’t exist.

But we do talk about it, we remember it – on purpose! All the time! Why would we do such a thing? Because Jesus, crushed in infirmity, afflicted, covered in the worst shame imaginable by human standards, still loved, still acted according to God’s standards. He trusted that nothing could separate him from the love of God. That God’s mercy was greater than any human shame.

I speak here not of the sexual abusers, who are culpable of heinous sins and crimes, certainly, but also driven by obsessions and compulsions, real mental illnesses which should be treated, as surely as their crimes should be punished.

I speak of the church leaders: religious superiors, bishops and any administrators, who, though not guilty of direct abuse, knew or could have known that abuse was occurring, and looked away, even once, thus endangering more victims, more children. [1]

Some of these leaders have been identified, through grand jury reports or investigative journalism, but how many more are there? Have any come forward of their own accord? Are church leaders trying to protect or portray an image of the church that is more about how we hope to appear and less about the truth, that we are sinners, loved by God?

What would happen if each and every bishop, cardinal, pope, church authority, came forward and said exactly what they know or could have known, about sexual abuse in the church?

Some who hear this may echo the words of Jesus to James and John: “You do not know what you are asking.”

Perhaps. But to those who say that the church, the Body of Christ, could not survive such a truth-telling, I offer this thought, borrowed from the late Nancy Eisland: The risen Christ’s wounds were not erased, but revealed. The Son of God does not hide his hands and feet from those who doubt God’s mercy, but invites them to come close, to touch, to feel, to see how God can turn pain into joy, darkness into light, death into life.

And since no shame, no pain, no affliction, real or perceived, honestly borne of one’s own guilt, or falsely taken on because of the sin of another, is too great to be healed by the servant who suffered for our sins, let us confidently, truthfully, approach the throne of grace to receive mercy and to find grace for timely help.

Lord, let your mercy be upon us, as we place our trust in you.

1. I must give credit to my sister, Lisa Cataldo, psychotherapist and professor of pastoral care and counseling, for making the distinction between the crimes of perpetrators, which, in the main, were motivated by compulsion, and the actions of the bishops, which were not. 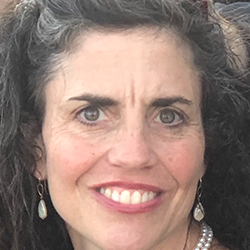 Maria Cataldo-Cunniff is a person with a disability.  She holds Masters degrees in theology from University of Notre Dame and Weston Jesuit School of Theology and is a member of the National Association of Catholic Chaplains. She has served as chaplain at both Phillips Academy, Andover and Boston Children’s Hospital. Her essay, Raise Up the Roof: Families with disabilities belong at the synod too was published in America Magazine.

While she now spends most of her time being a mom to Joseph, age 9 and Margaret, 8, Maria occasionally preaches and leads retreats as well. Through engaging Sacred Scripture, Maria makes meaning out her own experience of disability and suffering and hopes to help others do the same.