Today is the Feast of Christ the King, the final Sunday of the liturgical year before Advent begins next week.

When I was a child attending Catholic grade school, the readings for today’s feast conjured in my mind images of a powerful Jesus, riding in on the clouds at the end of time, with a crown on his head and seated on a throne. Around him, the people of the world were bowed down in worship. The diversity of humanity seemed stripped away and all people had become professed Christians, singularly devoted to proclaiming Jesus as Lord. Despite the images of Jesus as a humble man from the Gospels, this is ultimately what Jesus’ kingdom would look like—or so I thought back then.

It wasn’t until I lived in a Muslim-majority country that I began to think differently about Jesus’ kingdom and reconsider what it might be all about. As a young adult studying Muslim-Christian relations, I lived for a time in Amman, Jordan, a kingdom in the heart of the Middle East. Often in the afternoons I’d take walks in the neighborhood of Jabal al-Weibdeh, admiring the views across the urban valleys, stacked with limestone buildings and the minarets of mosques. Looking out over the hazy city,

I found myself struck more than once with the strange notion: Maybe this is the kingdom of God?

In the grimy streets of a country where most people weren’t Christian, I couldn't help but feel that God's building project was underway. It wasn’t the glittering kingdom of perfection and religious uniformity that I’d envisioned as a kid—but somehow, amid the mess, the kingdom was there. The people I met, many of them Muslim, were living out the kind of generosity and goodness that Jesus calls all of us to. They were hospitable and hopeful, despite their challenges, and they lived their lives in a quiet peace and joy that I still remember all these years later.

Elsewhere in scripture Jesus says this about his kingdom: “behold, the kingdom of God is among you.” God’s reign is not only something that we look forward to at the end of time, nor is it simply a realm that we will someday reach. It is also something that we can experience here, even if only in glimpses, and that we can work to build now. We experience the kingdom whenever we choose to live as if the justice, peace, and love of God’s reign are already present. Whenever we love our neighbor, give of ourselves to honor their dignity, or put ourselves on the line for their sake, we enact the kingdom.

It may not be present in its fullness, and we may not see the fruits of our labor, but this experience of the kingdom is very real nonetheless.

Contrary to the notions of my Catholic school upbringing, I no longer envision Jesus’ kingdom as a place inhabited only by Christians. Instead, it’s populated by many of my Muslim friends and so many others—whether religious or not—whose lives contribute to the gradual building of a more compassionate, more just world. The Second Vatican Council affirmed that God’s plan of salvation includes those beyond our religious fold, and that anything that is “true and holy” in other religions is evidence of the Holy Spirit at work.

Even the last line of today’s Gospel reading opens up our sense of who belongs to Jesus’ kingdom. When speaking to Pontius Pilate, Jesus says, “Everyone who belongs to the truth listens to my voice.” I understand this to mean that all those who bind themselves to truth, goodness, and justice have already heard and accepted Jesus’ call, even if they do not bear the name Christian.

As we move into the Advent season, our task is to look for the hints of the kingdom that are already present in our world. We might find it in places we’d least expect. And we are called to continue building the kingdom, alongside our Muslim friends and all those we meet. 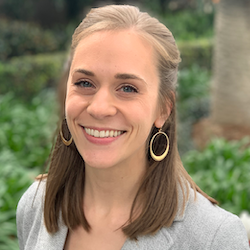 Jordan Denari Duffner is an author, educator, and scholar of Muslim-Christian relations, interreligious dialogue, and Islamophobia. Her books are Finding Jesus among Muslims: How Loving Islam Makes Me a Better Catholic (2017) and Islamophobia: What Christians Should Know (and Do) about Anti-Muslim Discrimination (2021).

A Catholic Christian based in Washington, DC, Ms. Duffner is currently pursuing a PhD in Theological and Religious Studies at Georgetown University. A former Fulbright scholar in Amman, Jordan, she is also an associate of the Bridge Initiative, where she previously worked as a research fellow. She currently teaches an undergraduate introduction to Islam course at Georgetown.

Committed to public theology, religious literacy, and combatting religious discrimination, Ms. Duffner has published dozens of articles and commentaries in both academic and lay publications. She serves as a frequent media commentator and consultant for non-profits, journalists, and church leaders, and has given numerous lectures and webinars across North America. She has experience both facilitating and participating in interreligious dialogue.

Bridging the realms of academia and public life, Ms. Duffner’s writing has received wide acclaim. Her first book was named among the top Catholic books of 2018 by the Association of Catholic Publishers. She holds a Master’s degree in theological and religious studies and completed her bachelor’s degree at Georgetown’s Walsh School of Foreign Service. Originally from Indianapolis, she lives with her family outside Washington, D.C.