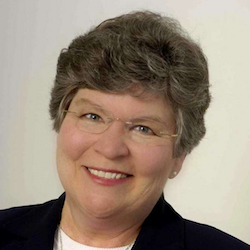 Sister Chris Schenk is a regular columnist for the National Catholic Reporter. Her column “Simply Spirit” is available at http://ncronline.org/blogs/simply-spirit   It appears online twice a month and periodically in print.

Her book, Crispina and Her Sisters: Women and Authority in Early Christianity explores visual imagery found on burial artifacts of prominent early Christian women was published in 2017 by Fortress Press. It is the winner of two awards from the Catholic Press Association: First place in history and third place for first time author of a book.

In October 2013, Schenk stepped down from her position as the founding director of FutureChurch, an international coalition of parish centered Catholics working for full participation of all Catholics in the life of the Church. She led the organization from 1990-2013 and worked to transform a diocesan network of 28 parish councils and 100 parish leaders into an international organization of over 3500 parish-centered activists reflecting the values of Vatican II. A Sister of St. Joseph, Sr. Chris formerly worked as a nurse midwife in Cleveland for 20 years.

Nativity of the Lord

... in what way are we laboring, like Mary, to birth God's abiding love into a world so much in need of it?