“Blessed are they who hope in the Lord.”  The song of the psalmist rings in my ears and urges me to reflect on what it means to hope during these troubled times.  How might we practice hope in the face of disheartening circumstances?  How might we practice hope when we learn more each day about the rise in hate crimes in the US; about the prevalence of sexual assault on college campuses; about the onslaught against Black and Brown bodies by those entrusted with protection of and service to our communities; about the ways in which those in positions of power dehumanize our migrant brothers and sisters, especially migrant children?  Just six weeks into this new year, we can find a myriad of reasons not just to be discouraged, but to move into a space of permanent despair.

It is increasingly tempting for those of us who are economically comfortable to stop paying attention right here, to concern ourselves with other matters. However, Jesus has choice words for us, as well.  These words echo the radical reversal we heard first in the Magnificat, that prophetic song of praise Mary shares after she consents to giving birth to the infant Jesus.  Preaching to his disciples that day, the words of Jesus mirror those of his mother, who had sung of the proud being scattered, of the lowly being lifted up, of the fulfillment of the hungry, of the rich being sent away with nothing. Following in her footsteps, he is prophetic in his own right, warning the wealthy of his day of what lies ahead, should they not change their ways.

Tempted as we may be to shift our attention elsewhere before the end of this passage, we are called not to turn our face from Jesus, but rather, to turn our whole selves toward the hope he exemplified.  We are called to take steps to realize Christian hope alongside the economically poor and the afflicted of today—those whom hate crimes terrorize, those who have survived sexual assault, those who have endured police violence, those who seek refuge and asylum here in the United States, especially along the southern border. The Good News of today’s Gospel reminds us that practicing our faith is rarely an easy task.  It invites us to make decisions about our lives that honor the vision of Jesus for our world, challenging the economic and political status quo.  It urges us not to accept these circumstances as they are, but instead, to become agents of change, steeped in the hope we begin to touch in the readings of today.

Let us become a people of radical Christian hope.  Let us place our faith in the Kin-dom that is to come. Let us embrace our charge to partner with God in bringing that Kin-dom about, in the here and now.  Let us follow the example of our brother Jesus who showed us what it means to embody hope in his choices about where and alongside whom he stood.  Amen. 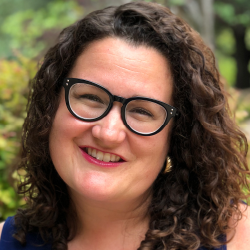