“Turn the other cheek?”  When taken at face value, today’s Gospel seems to present Jesus telling us to be doormats, to simply and passively accept mistreatment.  But this doesn’t square with the Jesus we know:  he challenges hypocrisy and isn’t afraid to question abuses of power, sometimes sharply.  And over and over Jesus shows compassion to the sick, the poor, the suffering.  So what do we do with Jesus’ three examples?

Well, context is everything!  Let’s dig more deeply into what Jesus’ original listeners would have known that we, with our 21stcentury, Western lens, don’t know about these three examples.

First - turn the other cheek.  In that culture, as in many Middle Eastern cultures today, the left hand is considered unclean.  In this imagined scenario, the person striking uses his right hand.  Now, within the hierarchies of the time, a superior would strike an inferior – say, a master and a slave - with a backhanded strike.   So if you are struck, by turning and offering your other cheek and almost daring them to strike you straight on, the oppressor faces a dilemma.  If he strikes you straight on, not with a backhand, then he is hitting you the way that culturally one hits their equal.  All of a sudden, the tables are turned.  In the words of theologian Walter Wink, to turn the other cheek is to say, "Try again. Your first blow failed to achieve its intended effect. I deny you the power to humiliate me. I am a human being just like you. Your status does not alter that fact. You cannot demean me."

“Turn the other cheek,” then, in the context of those who first heard these words in Roman-occupied Galilee 2000 years ago, isn’t about passivity, but responding to violence and injustice with resistance, courage and God-given human dignity.

Secondly, “from the person who takes your cloak, do not withhold even your tunic.” Remember those hearing Jesus’ message lived under Roman occupation and heavy taxation.  In the scenario, the one demanding your cloak would have been probably seeking payment of a debt, one caused by the heavy burden of Empire.  Scholars explain that a poor person would have really only have a cloak and a tunic – to give up both of these things is to essentially strip naked!  Now, unlike our culture, in that culture at the time the shame was experienced by person who saw the other naked.  So if you give up your cloak and tunic, standing naked, you escalate the situation, creating a drama that exposes the injustice.  You stand naked before your oppressor, a powerful critique of his unjust action.  All of a sudden, the tables are turned.  It isn’t about passivity at all, but responding to violence and injustice with resistance, courage, and God-given human dignity.

Finally, walk the extra mile. Again, context is everything.  Roman soldiers could, under law, could require those who they occupied, to carry their heavy pack for one mile.  But if you insist on carrying the bag a second mile – you’d be requiring the soldier to break the law!  All of a sudden, the tables are turned.   Now you’re the one with more power.  It isn’t about passivity at all, but responding to violence and injustice with resistance, courage, and God-given human dignity.

In each of Jesus’ examples, the enemy is neutralized, not destroyed. The cycle of violence is broken, the violence of the oppressor is exposed.  The God-given human dignity of a marginalized person is uplifted.  The system that strikes people, takes their few belongings, and compels them to carry a heavy load is critiqued.

So having explored the context of each of these examples and what they meant two millennia ago, we have to ask, what does this Gospel mean for you and for me today, in 2019, in our world?

As I prayed with each of these examples, I thought of some of young people I am blessed to accompany in Dominican University Ministry, some of whom are not documented, and have faced or still face discrimination, xenophobia, bullying, and marginalization because of documentation status.  A few weeks ago, at an interfaith storytelling event, one of our undocumented students – I’ll call her Isabel – shared her story of responding to injustice with resistance, courage, and God-given human dignity.  And Isabel gave me here blessing in sharing her story with you.

She challenged an authority figure who supported the policy of separating children and their parents at the US-Mexico border.  Isabel described how she worked not to become angry, but to stand up for herself, for other immigrants, and to speak the truth.  The situation escalated as this authority figure told Isabel she wasn’t behaving as she should, but Isabel stood her ground, affirming her own and all of our human dignity.  I recall the words of our Dominican sister Catherine of Siena – “speak the truth in a thousand voices, it is silence that kills.”

Young people like Isabel who courageously announce that they are undocumented and unafraid are taking a risk not unlike the creative, subversive risks advised by Jesus in today’s Gospel.  In claiming their dignity, they name the injustice of a broken system that labels them and their families criminals.  In refusing to hide in the shadows and be intimidated, in rejecting the label of alien, in affirming family unity, affirming the dignity of their dreams, the truth that they are beautiful, beloved children of God, they turn the other cheek.

2000 years ago in Roman-occupied Palestine, Jesus called for his followers to act with love, in joyful resistance, in creative nonviolence.  Today, Jesus offers the same beautiful, demanding, life-affirming call to all of us as the People of God.  Today, how will we respond to Jesus’ challenge? 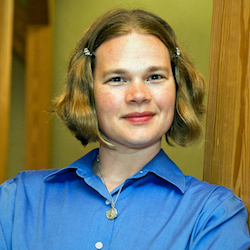 Rhonda Miska is a lay ecclesial minister, writer, preacher, and spiritual director rooted in the Dominican tradition. She holds a MA in Pastoral Ministry from the Boston College School of Theology and Ministry (2011) and an undergraduate degree in International Studies and French from the University of Wisconsin - Stevens Point (2002). She served as a Jesuit Volunteer in rural Nicaragua from 2002-2004, as the Social Justice Minister/Hispanic Minister at a Catholic parish from 2004-2008, and as the Community Coordinator of Innisfree Village (a community with adults with intellectual disabilities) from 2008-2014. Rhonda is a contributor (as author and translator) to the book Catholic Women Speak: Bringing Our Gifts to the Table (Paulist Press, 2015) and also contributed a chapter to the book Pope Francis Lexicon (Liturgical Press, 2018). Rhonda's writing has also appeared in U.S. Catholic, America Magazine, Presence: a Catholic Journal of Poetry, About Place Journal, and Global Sisters Report. She currently serves at the Church of St. Timothy in Blaine, MN and is on the advisory board of Catholic Women Preach. She is the convener of the Catholic Women’s Preaching Circle, a peer-led virtual space for Catholic women in ministry who are passionate about preaching to develop their skills.