Lent is a time of sacrifice, prayer, and reflection.  On this first Sunday of Lent, the first reading and the responsorial psalm focus on a covenant with God.  In the first reading from Genesis, God enters into a covenant with Noah and all living beings promising that the sacrifice made in the flood will never happen again.  In the responsorial, we hear that God’s ways are love and truth to those who keep the covenant.

The second reading and the Gospel focus on Christ’s suffering both in preparation for his public ministry and at the time of his death.  In the second reading, Peter tells us that Christ suffered for our sins so that his earthly suffering and death might lead us to God while the Gospel describes Christ’s suffering in the desert.  This week’s readings invoke so many of the feelings we have experienced both individually and communally over this past year.

It was during Lent last year that the COVID quarantine began in the United States.  The call to Lenten sacrifice feels like it has been with us ever since because we have all made so many sacrifices in the last year.  Sacrifices that have been compounded with suffering and loss.

Like God’s covenant with Noah, we were all called into a covenant with one another and asked to limit our activities, keep our distance when we do go out, and wear masks in order to stop the spread of the Coronavirus.  We were first asked to enter this covenant nearly a year ago.  In that time, just in the United States, there have been nearly 24 million reported cases of COVID and over four hundred thousand deaths.

Entering into a covenant is a solemn and sacred undertaking.  This particular covenant required sacrificing holidays, birthdays, and time with loved ones.  In more than four hundred thousand cases, that is time we will not be able to make up.  The love and truth that we promise and are promised in return can be life giving and life affirming.  Sometimes, as in this case, it can be the difference between life and death itself.

The sadness, suffering, and horror of this last year is overwhelming at times.  Sadness that the suffering persists.  Horror that everyone is not doing their part to alleviate this pandemic.  All coupled with the magnitude of what we have lost from the absence of our usual routine, missing the presence and embrace of family and friends, and the grief for loved ones who have lost their lives due to the pandemic.  Additionally, there is the horror of seeing this pandemic disproportionately kill people from the African-American, Latinx, and Native communities.

It has also been in the last year that we’ve seen the murders of Ahmad Aubrey, Breonna Taylor, George Floyd, and so many others whose names did not become widely-known.  The circumstances of their deaths and the events that followed show what little regard our society continues to have for African-Americans.  More recently, we’ve also seen lies on top of lies about the presidential election that resulted in systemic efforts to disenfranchise African-American voters in multiple states and culminated in an attempted coup that included the Confederate battle flag being carried into the United States Capitol – a reprehensible act that wasn’t done even during the Civil War.

It feels like we’ve had more suffering than one year can hold.  It has truly been a Lenten year.

As we reflect on this first Sunday of Lent and in the days and weeks to come, we must not forget the sacrifice and suffering we have borne and witnessed in the last year.  Doing so would dishonor all of that pain and all of that loss.  Instead, we must prayerfully embrace it because that will allow us to see the rebirth and renewal that comes with the light of Easter.

And through it all, we remember that…

And all the time… 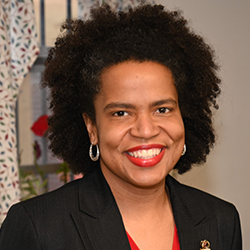 Tia Noelle Pratt, PhD is a sociologist of religion specializing in systemic racism in the Catholic Church.  She received her PhD in Sociology from Fordham University in 2010.  For more than twenty years, Dr. Pratt has researched and written about how systemic racism impacts African-American Catholic identity.  She is the President and Director of Research at TNPratt & Associates, LLC an Inclusion and Diversity consulting firm in Philadelphia, PA and the curator of the #BlackCatholicsSyllabus.  She is currently working on a book, Faithful and Devoted:  Racism and Identity in the African-American Catholic Experience with funding from the Louisville Institute and the Society for the Scientific Study of Religion.  Her work has been featured in the edited volumes, Young American Catholics, and American Parishes, as well as Faithfully, Commonweal, The Revealer, National Catholic Reporter, and America.    You can follow her on Twitter @TiaPhD.