The liturgy of this Palm Sunday invites us to contemplate God who, out of love, comes down to meet us.  He shares our humanity, making Himself Servant of everyone in his Son Jesus. Jesus is the Incarnated God and, due to the conflict that his ministry provoked among the powerful and the mighty of the people, he will endure persecution, prison, torture and death. The cross is very close to him now, once he arrived to the holy city of Jerusalem.  Entering the city, it will be revealed to us the last step of this path of new life that, in Jesus, God proposes us: to donate life because of love.

Jesus enters Jerusalem, the holy city, the city he loves so much up to the point of crying over it, foreseeing its destruction.  (Mathew 23; 37: "Jerusalem, Jerusalem, you who kill the prophets and stone those sent to you, how often I have longed to gather your children together, as a hen gathers her chicks under her wings, and you were not willing.”) He is acclaimed by the people who calls him Son of David, the blessed one who comes in the name of the Lord, the king of Israel.  Nevertheless, what perhaps not everybody notices is the fact that this king is different from the other kings of this world.  He is humble, he doesn´t present himself with honors, luxury and glory.  But humbly he comes seated upon an ass. This king doesn´t threaten anyone with his power.  As it was predicted by the prophet Zechariah, the people of God has no more reason to fear.  Because the king of glory comes in humility, as a servant, to save them. “Fear no more, O daughter Zion; see, your king comes, seated upon an ass's colt.” (Zechariah 9,9)

The people who looks Jesus passing by the streets of Jerusalem revere him, calling him the blessed one who comes in the name of the Lord and put palms and leaves to honor his passage.  In the letter to the Philippians Paul depicts the portrait of this king, of this blessed one, of this one sent in the name of the Lord. In the 2nd chapter of the letter –which is in fact a liturgical hymn - Jesus Christ is at the center of every word and feeling Paul evokes to his beloved community. He writes to the Philippians who are Christians and have, therefore, Christ as the prototype of human being and of true life.  And the description Paul makes of Jesus in the second reading of this Palm Sunday is exactly the one of the humble and obedient servant.

The hymn begins referring in subtleness to the contrast between Adam who didn´t obey to God, and Christ, the obedient, the New Human Being.  Adam´s superb was redeemed by Christ´s “kenosis”, humbly stripping himself of every privilege.  Being God, he didn´t remain attached to his divine condition, but accepted to incarnate, assuming human flesh, in order to serve, to give life, to reveal totally the Father´s love.  He obeyed completely till death on the cross. And because of that he could teach us the supreme lesson of love, mercy and service.

That is the reason why we can call him King.  This descent to the world and to human flesh was not a loss, but the condition by which he received from God resurrection and glory.  Because of his obedience, God made him Kyrios, Lord and the whole world recognizes and praises him as the One who reigns upon the entire earth and presides history. That is the path of Jesus.  So, it must be our path too.  Only in humility and service to others, renouncing to pride and privileges, we can follow this One we call King and Lord.

The Gospel – already announced at the beginning of liturgy -  will go behind, before the glorious entrance in Jerusalem, to Bethany where Jesus, feeling death approaching, is together with disciples and friends. And a woman was there.  Who is that woman? The tradition has sometimes interpreted and identified her with Mary of Bethany, Martha´s and Lazaro´s sister, who sat at Jesus‘feet, listening to his word.  But the gospel only mentions “a woman”, who came with an alabaster jar of perfumed oil, costly and precious, and poured it on Jesus‘head.

While through Jerusalem rumors of death and hate were moving on, that woman made a gesture of pure love, anointing Jesus‘head.

Some of those who were there protested. Why this waste of such an expensive oil which could have been sold and given to the poor? Jesus supports the woman and her gesture.  He knew the hypocrisy hidden behind those protests. He had always spoke in favor of the poor.  But now, he puts in value and tenderly accepts and receives that woman´s gesture and offer.  She did a good thing for him, anointing his body for the burial that would come with the violent death he would endure. And declares that “wherever the gospel would be proclaimed to the whole world, what she has done will be told, in memory of her. “

Jesus, the Son of man, never had a place to lay his head." (Luke 9, 58) This woman´s gesture anointed him as Servant and Messiah, and he accepted it, as prophetical anticipation of his Passover. The perfume and the essence of love poured out anointed   him, and through him, the whole universe who will be able to smell it: full life who will come from the death freely accepted for the sake of the others.  And this perfume will be remembered in memory of her who makes memory of Him.

Anointed by the woman, Jesus can begin his pilgrimage through Jerusalem, to the supper with his beloved friends and then to prison, to agony, to the painful prayer where God is pure silence in the Gethsemane, to judgement, torture and death. We, his disciples are called to follow him assimilating his attitude and his way of living.

The first reading would have prepared us to live this mystery, in the following of Jesus.  It presents us to an anonymous prophet, called by God to testify among nations the Word of life.  In spite of suffering and persecution, the prophet trusted in God and was faithful to His projects.

The primitive Christians saw in the face of this servant Jesus Himself, as described by the letter to Philippians: humble, obedient.  This prophet received from God a mission: to speak, to use his disciple´s tongue, gift of God. It is a well-trained tongue, good to speak to the weary a word that will rouse them.  But in order to speak, the prophet, the disciple must first of all listen.  Every morning the Lord opens his ear so he can hear.  And he listens, humbly, to everything the Lord wants to tell him, everything the Lord wants him to speak to others, to the people.

And because he has not rebelled to his mission, didn´t run away from the danger and the pain, turning and offering his back to those who beat him and not shielding his face from buffets and spitting, the word he pronounces and announces will be of great help to the poor, the oppressed and everyone who suffer and is sad and in despair.

Those readings of Palm Sunday call us to contemplate Jesus who enters in Jerusalem, humbly upon an ass and is acclaimed by the crowd as king.  We are invited to continue to contemplate him who is anointed in anticipation of his death and burial, he who will suffer at the same city which acclaimed him as King and Lord.  This is our call in this Palm Sunday.

The readings are calling us to adopt the same attitude as Jesus: humility, service, readiness to listen to the word of God.  Once we listen we are called to speak, to announce what we heard and learned.  And that announcement is that God didn´t forget His people, but brought them salvation and consolation of all sufferings and dangers.

The readings are also calling us to make gestures as the one made by the woman who poured all the precious perfume she had in the alabaster jar to anoint Jesus and confess him as Messiah and King.  We are called to express love in the world to others, mostly to those who suffer as Jesus was suffering at that moment.  The woman´s gesture of love and praise is valuable to be announced all over the world.  It is Gospel, good news.

The readings finally call us to learn with Jesus the path for true life.  And true life is life which is put at service of liberation of the poor and oppressed.  This way of living is not loss or unhappiness or anguish.  Even if suffering is included, those who live and serve humbly like Jesus, we will not be defeated.

God the Father who rescued His Son from death and glorified Him will do the same for each word, each gesture of true and humble service we will give graciously to our brothers and sisters. 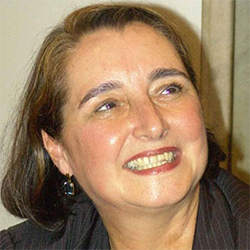 Maria Clara Lucchetti Bingemer is a Brazilian theologian and academic at the Pontifical Catholic University of Rio de Janeiro (PUC). Bingemer is an associate professor of Theology at PUC and has served as both the vice dean and dean of the Center of Theology and Human Sciences of the university, her alma mater. She has served in an advisory position with the Brazilian Catholic Bishops’ Conference, looking specifically at the role of women and married laity in the Church and civil society. Bingemer is also a leader in the Christian Life Communities program and serves on the boards of various theological journals and committees.