Do you realize what I have done for you? I can imagine that an uncomfortable silence hung in the air at the utterance of these words as Jesus rejoined the disciples after ceremoniously washing each of their feet. I can see them looking at each other, searching each other’s faces for one among them who might know the answer, then looking sheepishly but curiously back at their beloved teacher.

There is no mistaking that the question carries considerable weight, and I, like the disciples know that the answer is not the obvious one. Jesus hadn’t simply washed their feet, he turned their world, our world upside down in the process, and then very explicitly and directly instructs all of us to adhere to the model he just provided.

And what exactly did Jesus model for us? As he said, the disciples revered him, called him teacher and master, and rightly so. He was held in high esteem, was assigned an elevated status by his disciples, as evidenced by Peter’s strong protestations at the thought of Jesus performing a service normally reserved for the lowest members of society, a duty of servants and slaves. Remember that roadways were shared by goats and sheep, donkeys and horses, and the wheels of carts spread what animals always leave behind where the people also had to tread, so feet in those days weren’t just dusty, they would have been filthy.

So filthy in fact that Jesus had to remove his outer garments to keep them from getting dirty in the process, but then stooped down in front of each disciple in turn to perform what must have been a distinctly unpleasant service.

Unlike someone whose job this was, who had no choice in the matter Jesus chose to do this, demonstrating that truly he did “love his own in the world and loved them to the end.”

But, why wash their feet? I think because it was a deeply intimate and personal thing to do; by making such intentional physical contact with each person, Jesus also touched their hearts and minds and souls. It was a foreshadowing of an even greater sacrifice to be made on behalf of the whole world through his crucifixion, but this act was done on an individual basis. It was as if Jesus was saying to each one of the disciples, to each one of us, “I love YOU, in particular.”

He wanted to lift them up; to let them feel the depth of his love; the magnitude of their value in his eyes; to recognize the sacredness of being a beloved child of God. No wonder they were speechless when he asked if they understood what he had just done. It is an awesome thing to even begin to fathom this love beyond all understanding.

And how do we even begin to respond to that kind of love?

Jesus wastes no time in making that very clear by telling the disciples, “I have given you a model to follow. What I have done for you, you should do for each other.” By including Judas, who would betray him in this ritual, Jesus teaches us

that we are to honor and respect the human dignity of each person, unconditionally and without exclusion. This is to be what guides us as we interact in every aspect of our lives, from within our own families, out and into society and as members of a global community.

St. Pope John XXIII understood this directive to be the guiding principle and only way to establish world peace. In his 1963 encyclical, Pacem in Terris, Pope John uses the divine order of things that Jesus demonstrated, in which the value and dignity of human life is at the core of everything. He asserted that protecting and promoting universal human rights is the way in which God intended the world to operate and the only path to peace for us today. He developed this idea in a series of concentric circles with human rights at the core, followed by public authorities, international relations, and the world community.

Had we adopted the model of Jesus and the implications for modern society laid out by John XXIII, we would not find ourselves in such a dismal state today. We are in the painful throws of all kinds of crisis: environmental, economic, racial, political, and global crisis.

It can be overwhelming! What are we to do?

We can start by remembering the words that Jesus spoke, “What I have done for you, you should also do.” We should take no action, enact no policy, enforce no law that violates the human rights of any of God’s children. If we imitated the model we were given, we would not separate immigrant families with inhumane detention centers and deportations, we wouldn’t throw people away into human warehouses we call prisons, we wouldn’t tolerate a single more mass shooting, or any shooting at all, we wouldn’t use drones to bomb distant villages, or turn away starving and terrified refugees pleading for help.

We would invest as much into peace building and peace keeping efforts as we do to our industrial military complex and never even hint at unleashing nuclear weapons on another nation again. We would see to it that every member of our communities has shelter, enough to eat, access to education and meaningful work at a living wage.

As we enter into the Triduum, let us not sit in an unresponsive silence as Jesus poses his question to us, “Do you realize what I have done for you?”

Let us respond in word and action to God’s immense and unconditional love of us by treating each other as we have been taught. Let us to do for each other what has been done for us. 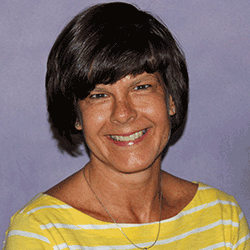 Sr. Andrea Koverman is a newer vowed member of the Sisters of Charity of Cincinnati and comes from a long line of SCs: two great aunts, an aunt, and a first cousin. She is passionate about living vowed life in contemporary society and believes in the future of religious life.

After graduating from Miami University with a degree in special education she moved to Beaufort, SC and began a twenty-plus career as an educator working with the Gullah community on the coastal Sea Islands. She earned National Board Certification and holds two master’s degrees, one in curriculum and another in administration. During formation, Andrea lived for two years on the southern border and accompanied the sisters she lived with who minister to mothers and their children with special needs in an extremely poor Colonia of Juarez, Mexico. She has subsequently had the opportunity to experience the cultures of Palestine, Israel, Guatemala, and Haiti while doing short mission trips and witnessing first hand some of the most dire and complex problems faced by our sisters and brothers in other countries.

Andrea is currently living with three other sisters with whom she has established a house of discernment for young women interested in intentional community living and/or religious life. She ministers as a program director at the Intercommunity Justice & Peace Center in Cincinnati, Ohio. The organization’s mission is to educate and advocate for peace, challenge unjust local, national, and global systems, and to promote the creation of a nonviolent society. The major areas of focus include ending the death penalty, addressing human trafficking, immigration reform, and peace and nonviolence initiatives.

Andrea is also a frequent contributor to the Future of Charity blog for discerning and new members of the women’s congregations that make up the Charity Federation.