The ideas of community, unity and peace are woven throughout today’s readings. There are many drastic contrasts; the gathered and scattered flock, dark valleys and verdant pastures, enmity and peace. The contrasts are resolved by images that we recognize as the salvatory Christ: an anointed shepherd, a king descended from David, Jesus who lacks even a moment to eat. This figure abolishes the law and replaces it with peace – unifying, protecting and anointing his community.

But if we go one step further into the text, we come up against serious division. Christ’s community is set apart because the law has been abolished and they have been renewed – but this is at the expense of a long-sacred tradition and a law that was given to Noah and Moses, the grand patriarchs of the Judeo-Christian tradition. These readings are clear: salvation is granted only through Christ. But they also leave us asking: is salvation only granted because of division? Specifically in the reading from Ephesians “abolishing the law with its commandments and legal claims/that he might create in himself one new person in place of the two” we are left to question: is the old Covenant of Judaism tossed aside for the new Covenant of Christ?

These readings come from a time when the Church was not yet the Church as we know her. Following the death of Christ, there was no automatic split between a “Jewish” and a “Christian” community; in fact there was no real “orthodoxy” to distinguish between believers. It took several centuries for the communities to form and the formation of one had undeniable effect on the formation of the other.

In Ephesians we see this struggle reflected as St. Paul describes the inclusion of the traditionally-excluded Gentiles, the un-circumcised. The lines right before today’s reading give us a look into this situation. “Therefore,” he says, “remember that at one time you, Gentiles in the flesh, called the uncircumcision by those called the circumcision…were at that time without Christ, alienated from the community of Israel and strangers to the covenants of promise, without hope and without God in the world. But now in Christ Jesus you who once were far off have become near by the blood of Christ.” (Eph 2:11-13)

Through Christ they have been welcomed into the promise of redemption, a covenant previously only available to the community of the circumcised, the Jewish people. So, if we look at the context of the letter to the Ephesians, we can understand that Paul’s goal was not to discount the Jewish people; rather Paul was extending the community of salvation to those who had been traditionally excluded.

These themes of exclusion and inclusion have obvious connections today. We see the physical struggle over inclusion/exclusion on our borders; we witness the underlying reckoning with identity as the citizens and residents of the United States struggle to define, whether by exclusion or inclusion, who is an “American”. I think in particular of my time spent with Catholic Charities Refugee Resettlement program in Chicago and my own personal grappling with this idea; were you American only if you contributed to society? If you wanted to live somewhere else, but were forced to be here by circumstance, were you American? If you did not speak the language, understand the American principles or care to integrate into society, but were living here, were you American?

Or an even larger, more eternal debate that plays out all over the world; are you redeemed? If you believe, if you attend services, if you profess and evangelize; are you redeemed? In ways large and small we seek to define ourselves in relation to another group; I am American because I am what she is not. I am redeemed because I do notdo what he does.

The passages today describe just this situation; people trying to define themselves in relation to others. At first glance it can appear that Paul sought to negatively define his community by negating the non-Christ believing Jews. But, by looking deeper, we can see that Paul did not seek to narrow the call to peace, but to widen it, to include the excluded. Perhaps this is at the heart of all the “defining” that we do in our daily lives; widening the circle. So as we go forth, let our own hearts imitate that of a weary, hungry, Jesus. What would the world look like if, instead of defining ourselves in contrast to others, we let ourselves be moved by pity, as Jesus was? 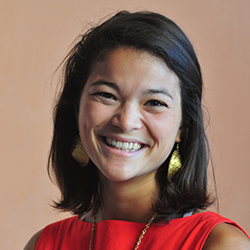 Samantha Lin is a Virginia native who earned her bachelor’s degree in Foreign Service from the Georgetown University Walsh School of Foreign Service in 2014. While at Georgetown, Samantha lived in an intentional Muslim community and academically concentrated on the Middle East, specifically Muslim-Christian relations. In 2012, Samantha studied in Amman, Jordan and simultaneously taught English to refugee kids through Jesuit Refugee Services Jordan. After graduating, Samantha served with Jesuit Volunteer Corp in Chicago where she worked in refugee resettlement. She has also worked with Seeds of Peace, an international peacebuilding camp for teenagers from the Middle East, South Asia and the US.

In 2015 Samantha was granted the Russell Berrie Fellowship in Interreligious Studies to study in Rome and remained there after the year-long fellowship, recently earning her diploma in Judaic Studies from the Pontifical Gregorian University. In addition to studying, Samantha organized interfaith dialogue and events at the Lay Centre at Foyer Unitas in Rome and volunteered with unaccompanied minors.