“Blessed are those who believe without seeing, the kingdom of heaven will be with them…” John 20 :29

In today’s gospel, our Lord Jesus fed about five thousand hungry people with five loaves and two fish. Only God can do such miracles, but not without human participation. This act calls us to faithfully share the little that we have in our lives with our brothers and sisters; it calls for compassion and love.

Nowadays, life is becoming more and more difficult because of many factors.  Among them is social injustice (the poor are poorer and the rich richer).  Many are victims of injustice, they are hungry for justice, but what are we doing to restore justice in our world?

You can start from your family, from your work place, your country. You yourself can impact the justice of your country and our world. Like Philip who analyzes the situation mathematically with precision, from knowledge of his home town, we may feel overwhelmed by the need.   Philip says, “Two hundred days’ wages worth of food would not be enough for each of them to have a little.”  He realizes that left to his own devices he is unable to do anything. And indeed, humanity left to its own devices is unable to perform miracles.

Second, as Pope Francis has said, we face a Globalization of indifference: We have many people across the world who are hungry -- a vast amount, like the five thousand who Jesus and his disciples encountered in today’s gospel. Because of our greed we are not able to share with them the little that we have. Many refugees around the world, many victims of conflicts need the very basics -- food and shelter -- but our greed is blinding us. Many victims of migration are dying because of hunger, they are hungry for justice, they are hungry for a better tomorrow, but what are we doing to help?

In the Bible Jesus said, “Whatever you do for the least of this world, you’ve done it to me.” Brothers and sisters, let us stop our greed and seek God in our neighbors, let us be the light and the salt in our world today.

We should try to be like the little boy approached by Andrew; he gives the little he has. Thanks to his sharing of what he had in his bag, however inadequate it was, it was brought to Jesus and in his hands, it was blessed and shared by all. What can generosity not do! It fills, it satisfies beyond all human expectation.

Allow me to tell you a story about a young student who was striving to feed needy students.

Once upon a time, a young Catholic student was walking on her university campus when she came across some images that broke her heart. She saw more than 50 students living underground below a lecture hall where there was only one door and no windows, and it was during the hot season, when it was around 40 degrees Celsius. The young woman could not believe that human beings were living in such conditions, so she decided to find out why. While investigating, she found out that one of her classmates had been living there for four years, so she decided to ask him more about it.

He explained that the only university in the whole country is in the capital city. After he finished high school he was admitted to the university, so he moved to the city without having a host family.  His parents were from a village and could not afford to pay rent for him in the city. And because of corruption he was excluded from the group of students who got a government scholarship which included living space on campus. So, he was forced to live underground below the lecture hall in order to pursue his studies.  He said, “All the students who are living with me underground are from very poor families, mostly from villages. Some of us have to eat once a day, because we can’t afford three meals a day, to buy books, school equipment, etc.”

After listening carefully to this fellow, the young woman was speechless because she could see that those students needed help, and no one -- not even the government or the university authorities -- was helping them. She decided to put her ideas on paper to try to help them and she started fundraising by presenting her proposal to all potential generous people who could help. Mainly what she put into her concept paper was to contribute to feeding needy students during exams.  She explained her ideas to a priest in the White Fathers order who worked in her country, and through him his congregation gave her one thousand euros. With that money she managed to feed a dozen of those students during exams.

The message here is for everyone to not close their eyes while seeing social injustice. Do the little you can to feed your fellow human being. As Elisha says in the first reading, “Give it to the people to eat.” The Almighty above all will see you and will bless you. God’s participation is important. It makes all the difference.

The end of the story; that young woman was me.

We all know that this world is in an increasingly bad state. The problems seem overwhelming and our resources seem so limited to be able to turn back the tide. What will you ever do with only five loaves and two fish?

As you look at the huge problems before you, assess your loaves and fishes :

·     Work on your conversion because the world “holier” begins within.

·     Look for the poor you can serve, maybe with money, by using your talents to counsel, or by giving just your time to listen.

·     Pray for this world and attend Mass faithfully, begging for God’s mercy on this sin-soaked world.

It is too easy to lament the condition of the world and, like the disciples, feel overwhelmed. Jesus says, ‘just bring me what you have and let’s get started.’ The conversion of the whole world will begin with me, with meager loaves and fishes. Jesus will surely multiply them; He will not fail.

Be the change you want to see, but with generosity. Not counting the cost, as it were.

Continue to ask for the grace to be generous, and to wonder about God’s bounty at the disposal of all, each and every one.

Thank you for your attention and may God bless you wherever you are. 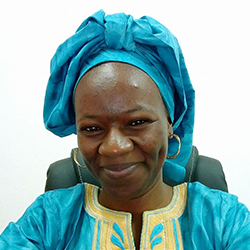 Afou Chantal Bengaly is a social justice activist, motivational speaker, trainer, moderator and youth mentor. She holds a doctorate in pharmacy from the University of Bamako, Mali and a master of sciences degree in International Health from the Jomo Kenyatta University of Agriculture and Technology of Kenya. She was the first woman from her home village of Kourouma to study at the university. Chantal served as a catechist for children ages 6 to 15 in her parish during her studies.

From 2008 to 2015 she served the International Movement of Catholics students (IMSC-Pax Romana) as national program coordinator and later on as Africa regional coordinator.

She currently works as program manager with Wetlands International Mali, a position she has held since 2017. She is also a counselor to the mayor of the municipality of Kourouma village located in the south of Mali.

She contributed the chapter "From the Local to the Universal: Small Student Communities in Mali" to the forthcoming text God's Quad: Small Faith Communities on Campus and Beyond edited by Kevin Ahern and Christopher Derige Malano and published by Orbis Books, Maryknoll, NY.

"I would like to express my gratitude to Fr. Fratern Masawe SJ and my husband Drissa Traore for their editing and support throughout this process."