Solemnity of the Assumption of Mary

Solemnity of the Assumption of Mary

As a young student of theology, the Feast of the Assumption of Mary was perplexing to me because I found a very wide gap between the glorified body of Mary in heaven and the bodies of women living here on earth. As we know, the body/spirit divide that informs the philosophies of religions have had a derogatory impact on women.  The patriarchal leanings of religions have denied female bodies the capacity to represent the divine. In addition, women’s bodily secretions particularly the menstrual blood is taken to be highly polluting in places set aside as sacred. In India, most of the Hindu temples deny women entry into the inner sanctum where the deity is placed. Even in Christianity, in many churches of the oriental rite, women are not allowed in the sanctum sanctorum during worship. I belong to the Syro-Malabar Church, one of the catholic oriental rites in India and in my home parish, which is a Cathedral;women are not expected to enter the Madbahaor the ‘holy of holies’ that is clearly set apart by railings. I find this practice exceedingly offensive as female bodies are still seen through the lens of purity–pollution set by religious patriarchy. It is only after entering more deeply into feminist theology that I found the imagery of the embodied Mary in heaven subversively fascinating, as it offers scope for challenging the gender politics of Christianity as a religion.

It is a global reality that the female body has become a site of violence.  In many parts of the world, women are mere bodies that are taken for granted, trafficked and violated, objectified and even sacrificed in families for its nurturance and for the satisfaction of male pleasure. Due to the high risk of sexual violence, a poll of global experts held earlier this yearnamed India the most dangerous country for women. Consequently, women themselves tend to devalue their bodies as decorative objects devoid of the spirit. It is against this backdrop that we need to bring into relief the liberative significance of this feast of Assumption as it is imperative that women reclaim their sacredness as embodied persons.

While Catholic theology makes Mary totally distinct from the rest of womankind, ‘assumption’ is not a privilege for Mary alone as Karl Rahner has claimed. For me, Assumption is important because it affirms the divinity of a female body. Personal is political. What is personally attributed to Mary has a political significance for women today.And so, contemplating the divinity of Mary’s body invites us to affirm our full humanity as radiating the divine.

It is within this liberative framework that I situate the liturgy of Assumption, which offers us powerful readings. I would like to reflect on the first reading and the Gospel in view of its transformative potential for women and other marginalized people in this world.

The first reading from the Book of Apocalypse (Revelation) gives us the imagery of a woman clothed with the sun and wailing in pain as she is in labor to give birth. There is also a dragon waiting to devour her child, a child whose destiny is to rule all the nations.  The reading tells us that when she gave birth, her child was taken up to God’s throne while she fled into the desert to a place prepared for her by God.

Right from the early Patristic tradition, this apocalyptic woman has been identified with Mary and later with the Church itself. Just as Mary gave birth to Christ at one moment in history, the Church is called to birth Christ in today’s world.

I would like to stretch this birthing imagery beyond Mary, the Church and the Christ figure to a new vision that we need to realize in this world, the vision of a new social order based on equality, justice and freedom for all. We need to birth this new vision that would subvert the social hierarchies and the power structures that are oppressive, and this is what we hear foretold in today’s Gospel:  ‘the mighty would be cast down from their thrones and the lowly lifted up, the hungry shall be filled with good things, and the rich,  sent away empty.”In this new social order, whoever is devalued for their colour, gender, sexual orientation, social status and the like, regain their dignity and personhood. Here, the body merges with the spirit and that is what the feast of Assumption is all about.

Perhaps we need to ask how we can work towards the reversal of the many oppressive systems of our times. There are pointers to the answer in this Gospel story itself. For Luke, the setting of the revolutionary song, the Magnificat is the encounter of two women, who are blessed in their embodiment. The ‘barren’ and the ‘Virgin’ give birth not according to human calculations, but by their openness to the Spirit of God.  And Elizabeth tells Mary: “Blessed are you who believed that what was spoken to you by the Lord would be fulfilled."

The Feast of the Assumption invites us then, to birth a new vision like the apocalyptic woman and like Mary, by becoming persons, a community, a Church who can intervene prophetically in this world. This new vision that we call the Reign of God would be realized where people share, where they love the earth and all its creatures, where theytake a stance toinclude the excluded ones of this world into the table fellowship of life. For this to happen, we need to be impregnated by the Spirit - Sophia, the Wisdom of God, who would make us friends of God and the prophets. Then, we will give birth to God as Mary did and share in her assumption in the ‘already- not yet’ dialectic, till we merge fully with the source of life. Are we ready for this birthing mission? Amen. 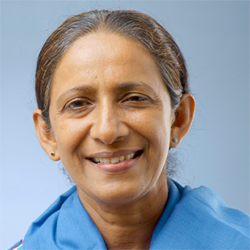 Kochurani Abraham is a feminist theologian, gender researcher and trainer from Kerala, India. She has a Masters in Child Development from Kerala University, Licentiate in Systematic Theology from Pontifical University of Comillas, Madrid and  PhD in Feminist Theology from University of Madras, India. Her feminist theological sensibilities awakened during her undergraduate studies of theology as the first woman student in an all male theology college and ever since that has been her primary passion and commitment in her many engagements as a social activist, academician and spiritual seeker. She teaches feminist theology in some institutes of formation, conducts Sexuality-Spirituality Integration workshops and Gender Sensitization programmes for youth and adults. As a Senior Fellow of Indian Council of Social Science Research (ICSSR), she has researched on the gender awareness of youth and has initiated gender and sexuality education in schools. Her research interests include gender, ecology, spirituality and transformative education. She contributes regularly to journals and collected works in India and abroad and is passionate about bridging the academia and the grassroots for a liberative praxis. Besides being an active member and former coordinator of Indian Women Theologians Forum, she is also actively engaged in the World Forum of Theology and Liberation. She was the former coordinator of Ecclesia of Women in Asia, an association of Asian level feminist theologians and has been the board member representing Asia for International Network of Societies in Catholic Theology (INSeCT). At present she is the Regional Coordinator of the Indian Christian Women’s Movement for Kerala and the Vice-President of the Indian Theological Association.