Woman Wisdom does it all. In the Book of Proverbs, the feminine personification of Wisdom is undeniably powerful. She builds a house, hews pillars, sends out her servants. But, rather than being remote or unattainable, Wisdom is also present in the smallest details: mixing wine, setting the table, preparing the food for her guests, even going to the highest point in the city to cry out the invitation to her feast. Seeing wisdom as part of our daily life is very much part of the Biblical tradition. As theologian Ellen F. Davis explains in a wonderful article on the Book of Proverbs, Wisdom seeks to shape our relations with family, community, with creation, but also daily decisions about things like technology and money. “The wisdom tradition,” she writes, “if we take it seriously, forces us to look at how our relationship with God is expressed through myriad daily social practices, including economic practices; it confronts us with the fact that our relationship with God is at every moment inseparable from our relation to the material world.”[i]

To seek Wisdom in the daily stuff of our lives, in lo cotidiano, is a serious choice: as Woman Wisdom has it, “Forsake foolishness that you may live.” But Wisdom presents this serious choice in a spirit of playfulness and joy. When she invites people to forsake foolishness and gain understanding, she isn’t inviting them to sit at uncomfortable desks and memorize, well, proverbs. She’s inviting them to a feast. And the way she invites them is remarkable: “Let whoever is simple turn in here.” To accept her invitation means being willing to raise our hands when Wisdom asks who’s ignorant, naïve, lacking in understanding. No matter how good a party looks, that’s a hard invitation to accept. I expect Wisdom is smiling, knowing that we can’t come to her banquet unless we have the humility to admit our limits and our desire to grow.

That playfulness, it turns out, is an essential part of wisdom. Proverbs 9 may portray Wisdom as the all-competent teacher, builder, and party-thrower, but just a few verses earlier, Wisdom describes herself as childlike and full of joy. She was the first of God’s creations, and God’s companion as the world was made: “I was daily God’s delight,” she says, “rejoicing before God always, rejoicing in the inhabited world and delighting in the human race” (8:30-31).

Once we hear the note of joy in Woman Wisdom’s voice, we can hear it more clearly in today’s other readings. Our psalm echoes the theme of feasting, telling us that we know God’s goodness through what we taste and see, through deliciousness and beauty. It echoes, too, Wisdom’s solemn and joyful invitation to life: to turn to God is the most serious of choices, but those who choose it will be “radiant with joy.” The Letter to the Ephesians repeats Wisdom’s invitation to forsake foolishness, and again the choice is both deeply serious and lit with joy. If you want to live wisely, greet your friends with singing, act drunk because of the Spirit, sing and play before God--and, in what’s likely to look most foolish of all, “give thanks always and for everything,” even though the days are evil.

In Ephesians, the word for thanksgiving is the same word that gives us “Eucharist.” We heard that word three weeks ago, as we began to listen to the Bread of Life discourse in the Gospel of John. In that reading, Jesus asks Philip how they can feed the five thousand gathered to hear him. The gospel says Jesus is testing Philip, and I can’t help imagining that there’s some playfulness in Jesus’s words, a smile like Woman Wisdom’s. The answer to Jesus’s questions comes in a child’s humble offer of a few loaves and fishes. Jesus, far from spurning the gift, “gives thanks,” eucharist, and the five thousand are fed abundantly (Jn. 6:5-13).

To be sure, the tone of today’s gospel is more ominous. Jesus’s references to his life given for the world, the setting near the feast of Passover, the grumbling of his hearers, all point toward his Passion. But Jesus, like Woman Wisdom, is inviting his hearers to a feast, and there is joy here, too. As Biblical scholar Raymond E. Brown puts it, in Jesus, “Wisdom has come to give food to all who seek.”[ii]

Unfortunately, becoming wise isn’t quite as easy as sitting down to eat. After today’s reading, Proverbs goes on for 21 more chapters of advice to guide us through the daily decisions we still have to face. We’re all called to do serious work in our own evil age. But we can’t let the times make us hold so tightly to ourselves that our hands aren’t free to partake in and share the banquet. As G.K. Chesterton put it, “Life is serious all the time, but living cannot be. You may have all the solemnity you wish in your neckties, but in anything important (such as sex, death, and religion), you must have mirth or you will have madness.”[iii]

Fortunately, our community gives us many practices that can help us grow in wisdom, day by day: sharing the Eucharist, greeting each other with happiness (if not actual songs and hymns), being the hands through which God answers those who are poor, accepting joy with thanksgiving. In his 2014 Christmas message to Vatican officials, Pope Francis recommended one of his own practices: praying daily for humor in words attributed to St. Thomas More. It’s unlikely, to be honest, that the saint wrote the prayer himself. But with its attention to the everyday, its humility, and its welcoming of joy, it’s surely a prayer worth repeating. May it be fulfilled in your life.

Grant me, O Lord, good digestion, and also something to digest.

Grant me a healthy body, and the necessary good humor to maintain it. Grant me a simple soul that knows to treasure all that is good and that doesn’t frighten easily at the sight of evil, but rather finds the means to put things back in their place.

Give me a soul that knows not boredom, grumblings, sighs and laments, nor excess of stress, because of that obstructing thing called “I.”

Grant me, O Lord, a sense of good humor. Allow me the grace to be able to take a joke to discover in life a bit of joy,

and to be able to share it with others.[iv]

2. “At the final Passover of his life Jesus will institute the Eucharist as his own anticipation of the messianic banquet. But in ch. vi, in the Galilee setting, he wishes to show that the banquet given to the five thousand just before Passover was messianic in a way that they have not recognized: it was a sign that Wisdom has come to give food to all who seek.” Raymond E. Brown, The Gospel according to John (i-xii), The Anchor Bible vol. 29, (New York: Doubleday 1966), 274.

4. Madeleine Teihan, “Pope Francis: ‘I Pray to St Thomas More Every Day,’” Catholic Herald,December 22, 2014, http://catholicherald.co.uk/news/2014/12/22/pope-francis-i-pray-to-st-thomas-more-every-day/; and Pope Francis, “Presentation of the Christmas Greetings to the Roman Curia: The Roman Curia and the Body of Christ,” December 22, 2014, https://w2.vatican.va/content/francesco/en/speeches/2014/december/documents/papa-francesco_20141222_curia-romana.html. 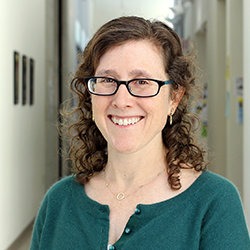 Anita Houck is Associate Professor of Religious Studies at Saint Mary’s College, Notre Dame, Indiana, where she has served as department chair and director of the Writing Proficiency Program. A former high-school teacher, parish Director of Religious Education, and Pastoral Associate, Anita received her B.A. in Religious Studies from Wesleyan University, an Ed.M. in Teaching and Curriculum from Harvard’s Graduate School of Education, and an M.A. and Ph.D. in Religion and Literature from the University of Chicago Divinity School. She is the Secretary/Treasurer of the Society for the Study of Christian Spirituality and former Vice President of the College Theology Society, which awarded her the Monika Hellwig Award for Excellence in Teaching in 2017. She most often teaches world religions and comparative theology, and her research interests include religion and humor (especially laughter at and by God); vocation, especially of single life; and pedagogy. She is co-editor, with Mary Doak, of Translating Religion(Orbis, 2013). She lives in Riverside, Illinois.

She would like to thank Bill Waymouth, Susan Baxter, and Mary Ellen Hynes for their generous help in producing this video.