What a set of readings! They offer so much more food for thought and even dispute than can be digested in any one reflection: we have creation (Adam and Eve, not “Adam and Steve”), the meaning of the woman’s creation after the man (is she partner or “helper”?), the meaning of “one flesh” (used so much by the church to talk of marriage and sexuality), the Psalm obviously addressed to the husband (“your wife, your children”), salvation through suffering, trick questions coming from the Pharisees, the prohibition of divorce and remarriage (on which there has been so much debate in recent months) and, in the longer Gospel selection, that we have to accept the kingdom of God “like a child.”

As a feminist, I read these passages with my antennae raised high and over the years I’ve worked hard to encourage in my students their ability to read, hear and interpret the bible critically: that human creation is about companionship, not compulsory heterosexuality or divinely-ordained patriarchy; that sexual unity should be mutual and joyful and free from fear; that spouses and children are not possessions; that suffering is not always to be embraced. But the words of Jesus about divorce and remarriage seem to resist interpretation. Particularly in the Catholic tradition they have been interpreted quite literally.

This passage was something I thought a great deal about as a young adult when my parents’ marriage of 26 years finally crumbled. No divorce is easy, and even though all six of us children felt some relief at this, ending years of anger and acrimony, it still felt like a death. So when a few years later, my mother and her supervisor at work fell in love and decided to get married, she agonized over the fact that she was now excluded from the Eucharist. It prompted me, as a young theology student, to learn more about church teaching and I wrote a paper for an ethics class on how we might take a new look at the theology of marriage, recognizing longer life spans; how a marriage, even though entered into with love, hope and resolve, might eventually die; how there might be the possibility of new life and even grace in a second marriage. I don’t think that Jesus’ intent was to cause pain for couples and families dealing with divorce and remarriage. It seems to me that it was rather to challenge a mindset that wanted to find fault, that wanted to show how Jesus had the nerve to oppose even Moses!

So can we reconcile the emphasis on unity, love, companionship, and self-sacrifice with what seems to be this stark prohibition? I think we can, but, like everything in life, it’s complicated. For one thing, Jesus’ own 1stcentury context was definitely patriarchal, so prohibiting divorce and remarriage was also a way of protecting women; women actually didn’t have the option of divorcing a man, and this imbalance is still a problem for some Orthodox Jewish women whose husbands refuse to give them a get, a religious bill of divorce. For another thing, Jesus sometimes made what seemed to be pretty outrageous statements that were very strong and even troubling about how we ought to live: “If your right eye offends you, pluck it out!” “You must hate your mother and father!” Last I checked, we haven’t take thesestatements literally.

I think a clue to understanding this prohibition comes in that last comment Jesus makes about being like a child. While it might not be entirely true that children are wonderfully simple and innocent and don’t argue petty points of the law – ask any parent of a child determined to get his or her own way! – children flourish with love and recognize authenticity. So, when it comes to living in the kingdom of God “like a child,” I think that what Jesus may have had in mind was a child’s openness and especially a child’s response to being loved unconditionally, which is how God loves us. The response to unconditional love is love. The Pharisees were really asking about conditional love: what about this, what about that? Note how Mark comments “they were testing him.” God’s hope in creation, if we can call it hope, was that the love of human beings together would be unifying and life-affirming and respond to the need that we all have to be loved, a love that unfortunately didn’t then and doesn’t now always turn out so well.

If we are to read these passages generously, which is what I think we need to do, we read them in the most loving way possible, since what they are all about is love: God’s love in sharing life with us, our experience of finding someone to love and who loves us, the love of the parents in looking over their family, the love of Jesus in being with us. I for one see the combination of these readings as an affirmation of our need to be loved and to love -- and as a rejection of the tendency to try and find exceptions or loopholes to the love of God which, as St. Paul reminds us, surpasses all understanding. 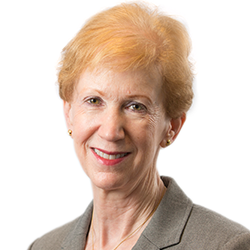 Dr. Susan A. Ross is Professor of Theology and a Faculty Scholar at Loyola University Chicago. She is the author of Anthropology: Seeking Light and Beauty(Liturgical Press, 2012), For the Beauty of the Earth: Women, Sacramentality and Justice(Paulist, 2006),Extravagant Affections: A Feminist Sacramental Theology(Continuum, 1998) and over 75 journal articles and book chapters. She is the recipient of a Louisville Institute Sabbatical Grant, the Book of the Year Award from the College Theology Society in 1999, and the Ann O'Hara Graff Award of the Women's Seminar of the Catholic Theological Society of America. She is Past President of the Catholic Theological Society of America (2012-13) and served as Vice President and member of the editorial board of Concilium: International Theological Journal.From 2008-2016 she served as chair of the Theology Department at Loyola. Most recently, she has taught courses on Beauty and Ethics, Theological Anthropology, Conscience, and Religion and Gender.

Susan first preached as a graduate student at the University of Chicago Divinity School, where she came to appreciate its Protestant heritage and emphasis on the W0rd. Since then, she has preached at Loyola, professional society liturgies, workshops and conferences.