I’m talking to you right on the heels of the visit of Pope Francis to Ireland for the World Meeting of Families. It was the first time a Pope had visited Ireland in 40 years, and he found a country changed beyond recognition and struggling to come to terms with its Catholic heritage. It was a visit which radiated light and goodness for many.

Yet this trip was over shadowed by the dark cloud of child abuse by members of the Catholic Church and decades of institutional cover-ups. The breaking international scandal unearthed the many cases of historic sex abuse here in Ireland. It was accentuated by the recent discovery of mass unmarked graves found at a home for unmarried mothers and their babies. It seemed at times over the past few weeks that the Church was falling to pieces. Pope Francis called it “an open wound.” As a woman and mother of young children, at times I felt disgusted to be part of this Church. As Pope Francis said in one of his many encounters, many of us felt like “running for the exit.”

The readings we are invited to reflect on today can help I think, if we listen intently. A clear message that stands out in today’s readings is the righteous anger of Jesus towards those who take up positions of leadership and abuse that power. It is right to be angry. It is clear, from Jesus’ words, whom he stands with. “Whoever causes one of these little ones who believe in me to sin, it would be better for him if a great millstone were put around his neck and he were thrown into the sea.” (Mk 9:42) How many people in today’s world, in seeing the failings of some of our church leaders, have been rightly turned off? How many have been denied the light of faith? In the second reading, too, James speaks about the judgement awaiting those who act unjustly towards others and abuse their power. Justice is coming for those who have been down trodden.

In saying this, Jesus could seem somewhat intolerant to the failings of others – is this not the same Jesus who says your sins are forgiven 70 times 7? Yet he seems to be saying that yes, forgiveness is possible, but this also means justice for victims. It is a calling for deep reform of our Church today. A calling to uproot any form of clericalism which gives rise to such injustice. This has to be rooted in the truth, as our Psalm today invokes: “Consecrate us in the truth…”

Yet even in the midst of this, the hope of redemption, of the Kingdom of God among us, is also present in these readings. They remind us that that the Spirit blows wherever it likes – and does not require an official stamp of approval – even from the hierarchy. In the first reading from the Book of Numbers the Elders are scandalised that Eldad and Medad remained in the camp, yet they too received the spirit of prophesy. (Nm 11:26) They were filled with the spirit! They didn’t go to the mountain top and take part in the rituals – they stayed with the people, in the messiness of the camp, and shared the spirit there where they were.

This theme of the freedom of the spirit to roam is mirrored in the Gospel reading from Mark. The disciples were scandalised that some others who were not in the “gang” were seen casting out demons in Jesus’ name. They were doing good works. It prompts Jesus to say “For whoever is not against us is for us.” (Mk 9:40). He goes on to say that all good works will be rewarded. What matters is the works – not the badge.

In our church and in our world today there are many people and places where the Spirit is blowing. Even over the past weeks, as the scandal and negativity swirls around, green shoots have been appearing on the tree. They have been growing from the grassroots up in the most surprising places during this Season of Creation. For me, one of the most powerful moments of the World Meeting of Families came in a pop-up garden to celebrate Our Common Home. This beautiful garden was situated in a local monastery - on the fringes of the main meeting. It came into being thanks to the collaboration of many religious orders, lay people and church groups. It involved the participation of many on the periphery of the Church and non-church groups. Throughout the week many hundreds of pilgrims came and prayed. They came to seek solace and healing at the holy well. Many tears were shed in the garden. This garden, like many before it, became a place of renewal and hope. Was it not in a garden that Jesus suffered most? Was it not in a garden where the resurrection happened? In the garden was possible to glimpse a spirit-filled church – a church full of beautiful gardens, renewed by a free flowing Spirit who cannot be pinned down. A spirit who calls us into ever deeper truth, a thirst for justice and beauty. 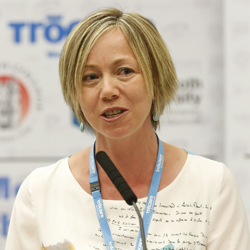 Lorna Gold works for Trócaire, the Irish Catholic Development Agency. She is a specialist in International Development who has worked in an academic and NGO context for almost two decades. For ten years she headed up Trócaire’s Policy, Research and Advocacy team. Currently, she is leading a project on how the Irish Church can implement Pope Francis’ message on integral ecology, articulated in Laudato Sí. She writes and speaks extensively on Pope Francis’ vision and was responsible for chairing an all-female panel at the launch of this encyclical in the Vatican with world-renowned author, Naomi Klein in 2015. She holds a PhD in Economic Geography from Glasgow University and as well as working for Trócaire, lectures in Applied Social Studies in Maynooth University. She has published widely, being the editor and author of numerous books, journals, policy reports and academic papers. She is a regular contributor to public debate in Ireland and internationally on climate justice and helped co-found ‘Stop Climate Chaos’ Ireland in 2006. She is vice-chair of the Global Catholic Climate Movement and a member of the Irish Government’s Advisory Group on the national Climate Dialogue. She is originally from Scotland and is married with two children. Her most recent book entitled “Climate Generation – Awakening to our Children’s Future”, was released in June 2018 by Veritas. Inspired deeply by Pope Francis, it tells the story of a mother and activist awakening to the plight of the next generation. Lorna is married with two children and lives in Maynooth, Ireland.