During this month of October,

Maximum Illud promulgated by Pope Benedict XV in November of 1919,

what Pope Francis has declared to be an Extraordinary Missionary Month,[1]

by intentionally living out the vocation to be missionary disciples.

As Pope Francis has observed,

"purified of any colonial overtones and

and called for transcending national boundaries and bearing witness,

with prophetic spirit and evangelical boldness,

to God's saving will through the Church’s universal mission."[2]

So what, we might ask ourselves, is our response

to the missionary mandate:

What does it mean to be “baptized and sent”?

What does it mean to

“go into the whole world and proclaim the Gospel to every creature” (Mk 16:15)?

Thirteen years prior to her violent assassination on February 12, 2005,

in Anapu, a city in the state of Pará,

in the Amazon Basin of Brazil,

a member of the Sisters on Notre Dame de Namur from Dayton, Ohio,

wrote the following words to her family and friends,

on the occasion of her 60th birthday:

"I've been able to live, love, be loved and work with the Brazilian people,

to help them find confidence in themselves,

to profoundly sense God's presence in their lives

and then be a creative influence in society

from which a more human society can be born …”

I remembered the example and words of Sister Dorothy

as I began to reflect on the Scriptural readings for today

and their relevance for two concurrent events

taking place in the life of the People of God

at this precise moment in history.

This commemoration itself dates back to 1926, when Pope Pius XI,

as a time to remember, renew and remain faithful as we reimagine

our commitment to mission and to the world church.

are gathered in Rome

to participate in the Special Assembly of the Synod of Bishops

dedicated to the Pan Amazon Region.

From October 6th until October 27th,

those participating in this Special Assembly

are focusing their attention, discussions and deliberations on

New Paths for the Church and for an Integral Ecology

“designed for and with the People of God who live in this region:

inhabitants of communities and rural areas, of cities and large metropolises,

people who live on river banks, migrants and displaced persons,

and especially for and with indigenous peoples.”[3]

these two points of reference,

World Mission Sunday and the Special Synodal Assembly for the Amazon,

disclose to us important insights for our unfolding future as missionary disciples.

and make meaning of its significance for our lives,

they also invite us to do more than see and judge;

they require us to act,

to make connections and to put into practice

what we say we believe:

that participation in God’s mission is central to our lives,

that every vocation to share in God’s mission involves

acts of solidarity and interdependency,

of holding one another up, of being stronger together

acts of witnessing to what we believe

and remembering who our teachers were and are,

and finally, acts of unrelenting persistence

that enable us to experience the mystery of God’s grace,

along with the ways in which it operates and transforms human hearts.

As we listen to the story from Chapter 17 of the Book of Exodus,

the narrative of Moses’ need to be supported

by Aaron and Hur

calls us to remember

that the vocation of God’s prophets

inevitably involves the experience of having to be interdependent.

As the words of the Psalmist offer a message of assurance,

they also call us to renew our hope,

amidst uncertainties and anxieties,

and to trust in the One who has called each of us by name,

knowing that “our help is from the Lord who made heaven and earth.” (Psalm 121)

We hear in Paul’s Second Letter to Timothy

an urgency to the call to remain faithful

in our embodiment and proclamation of the Word

that has been entrusted to us.

the parable of the dishonest judge and the persistent widow

from Chapter 18 of the Gospel of Luke

calls us to reimagine the realities in which we find ourselves

and, as missionary disciples,

to be attentive and persistent in our pursuit of that justice

that signals the coming of the Reign of God.

for the sake of the Gospel,

Sister Dorothy - and all martyrs of Christ in the Amazon,

guide us, this day, in the ways of righteousness and peace. 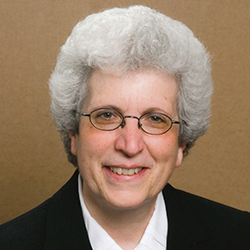 Margaret Eletta Guider, OSF, is Associate Professor of Missiology at the Boston College School of Theology and Ministry and department chair of the Ecclesiastical Faculty.

Born and raised in Chicago, Illinois, she completed under-graduate and graduate degrees in education at the University of Illinois and taught in both public and parochial schools in the inner city.  In 1975, she became a lay missioner and ministered in the rural interior of Goiás, Brazil, with the Sisters of St. Francis of Mary Immaculate. Upon her return to the United States, she entered the congregation, and after a period of formation, she returned to Chicago and served as director of Mission Education for the Archdiocese and as chaplain for the Cook County Juvenile Detention Center. These experiences informed and influenced her ongoing commitment to Franciscan life, her interest in mission and the world church, and her passion for theology and ministerial formation.

Sr. Guider holds theological degrees from Catholic Theological Union, the Weston Jesuit School of Theology and the Divinity School of Harvard University. Her most recent publication is The Grace of Medellín: History, Theology and Legacy: Reflections on the Significance of Medellín for the Church in the United States (Convivium, 2018). Currently, she is working on a manuscript entitled With Hearts Broken Open: U.S. Franciscan Missionaries in Latin America, the Caribbean and Africa (1879-2009). She is past-president of the American Society of Missiology and vice-president of the Association of Professors of Mission. She has served as an advisor and consultant for religious institutes and missionary societies as well as a board member for a variety of Catholic institutions and faith-based organizations.