In today’s readings from the Old Testament, namely 2 Kings 5:14-27 and from the New Testament, namely Luke 17: 11-19, I begin with highlighting the story about the Commander of the Syrian Army, Naaman with a dreaded skin disease. Naaman was instructed by the Prophet Elisha to travel to Samaria to be cleaned in the Jordan River.  Angry, Naaman really did not want to listen to Elisha to travel pass two other rivers back in Damascus, which he thought were much better; in the end, he listened to Elisha and was made clean in the Jordan River, after dipping himself in it seven times.

Naaman desired that the Prophet Elisha receive a gift, a payment or offering for his blessings, for making him clean. Elisha adamantly refused the gift, instructing Naaman, instead, to go in peace. But Elisha’s servant, Gehazi, believed otherwise. He thought that Naaman was getting away with something unethical and chased after Naaman for repayment. Elisha, insulted by Gehazi’s abrupt, false, and unofficial intervention for repayment from Naaman, punished him. Gehazi was contaminated with Naaman’s formerly dreaded skin disorder for life, with skin as white as snow.

In Luke’s Gospel, ten men in a village located between Galilee and Samaria also suffered from a dreaded skin disease; they all were made clean, while in the process of following Jesus’ instructions to go to see the priest. Only one of the lepers, a Samaritan, returned to extend deep appreciation and gratitude to Jesus for being made clean. He threw himself to Jesus’ feet. Moved by this gesture of thanks, Jesus also wondered where the other nine lepers were. Refocusing on the Samaritan man, Jesus affirmed that his faith has made him well, to get up and go.

It is important to note that although this dreaded skin disease could be symbolic of any type of skin affliction such as ringworm, warts, or eczema, many biblical scholars have named this affliction leprosy. During Biblical times leprosy was looked upon NOT as an illness, per say but for someone who had it, he/she was determined to be ritually unclean.  Nevertheless, something was wrong with them and they were not welcomed. A nerve disease, leprosy caused victims to present with skin rashes or skin discoloration, distorted faces, half missing fingers, toes, mottled stumps, and/or missing noses. Further, leprosy was thought to attack garments and houses.  As a result of this skin disorder, lepers were not only socially excluded from Jewish society; they were stigmatized, made to be isolated for a period of time until the priest determined that they were healed, “clean” or that the disease was no longer infectious, or chronic.

Interestingly in both texts, for Naaman, the priestly cure for leprosy meant that Naaman traveled to Samaria to see the Prophet Elisha to be healed. Naaman returned to give the Prophet Elisha a gift of thanks. For the Samaritan leper, he was the only one from the nine who returned to give thanks to Jesus for being cured by him. Anyone in or from Samaria or the Samaritans were foreigners. They were looked upon as “others” in the midst of Jewish society. The enmity between the two groups was entrenched and old. They disagreed about everything that mattered to them: how to honor God, how to interpret the Word of God, where and how to worship God. They avoided social contact wherever and whenever possible.

From these two biblical accounts one can draw some parallels to situations from our contemporary contexts that socially exclude people, claim them as unwelcomed. Let us consider dark skin color—black and brown bodies as symbolic of leprosy and those treated as if they were ritually unclean. Let’s take for instance the current news reports (for September 2019) that spoke about Bahamian evacuees, coincidently mostly dark-skinned bodies, people struggling  and hurting from the devastation, resulting from Hurricane Dorian. For those who did not have visas or proper documentation to enter the United States, they were made to disembark from the rescue ferry boats. President Trump, vocalized the need to be very cautious about allowing the evacuees entrance in the United States; there is fear of letting very bad people—gang members, drug dealers, and people in general to come into this country, who were not supposed to be in the Bahamas in the first place.

Let us reflect, now, on the long, enduring, and pathetic situation at the US/Mexican border where children have been separated and many lost from their parents, relatives, and/or guardians. Coincidently, mostly, they too, have black and brown bodies. While fleeing corrupt governments, violence, economic poverty, among others, their ultimate desire is/was to be inserted into the American Dream.  Characterized, however, as rapists, gang members, criminals, violent people, aliens, etc. they are unwelcomed into the United States. While some are deported others are trapped in cages, in unsanitary conditions.

Taken together, both of these current events are examples for us that point to the plight of black and brown skinned bodies, people who hail from foreign lands, and are culturally, ethnically, racially, religiously, and/or socially different from U.S. cultural norms or by those who hold prejudices, power, and privileges to dictate that some people are welcomed, while others are unwelcomed into the United States.

Just like Naaman and the Tenth Samaritan, who were socially excluded because of their skin disorders and their otherness, they were determined to be ritually unclean because of human made purity laws. Many people throughout the world find themselves in inhumane and oppressive situations where they are treated as if they are lepers, unclean, ritually, or otherwise.

The good news is that the Lord knows way better than that; human beings are created in the image and likeness of God and therefore, are brothers and sisters to each other. The Lord hears their cries for assistance; through his mission and ministry, he erases any stigma, stereotypes, prejudices, oppressions resulting from skin disorders, skin color differences, foreigner and, thus, unwelcomed statuses, etc.

I offer that the Responsorial Palm, Psalm 98 and 2 Timothy 2: 8-13 for today’s reading essentially capture these reflections in a call and response mode. They reaffirm for us how we are to be as a result of God’s constant love, care, mercy and justice. Upon his healing, for example, Naaman proclaimed, “now I know that there is no god, but the God of Israel.” The tenth Samaritan fell at Jesus’ feet to pay homage.  We all sing a new song to the Lord for the Lord’s saving power; for God has given and kept an enduring promise to the people of Israel that all will come out right. From 2 Timothy, the call is to remain faithful to the meaning of the Paschal Mystery of Jesus Christ. That is, to believe that Jesus was sent to show us how to live and love—God, self and neighbor in a spirit of hospitality and welcome. For there is no difference between Jews and Samaritans, disabilities and abilities, men, women, and children, black, brown, and white bodies. Yes, we are all one in Christ Jesus. And just like Naaman and the Tenth Samaritan did, we respond in gratitude, returning to God regularly in prayer and reflection with expressions of thanks for God’s mercy and goodness. 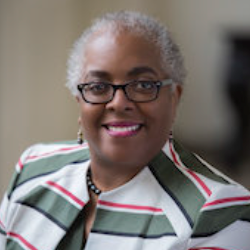 Shawnee M. Daniels Sykes, PhD is currently a Professor of Theology and Ethics at Mount Mary University, Milwaukee, Wisconsin. A Registered Nurse by training, Dr. Daniels Sykes received her doctorate from Marquette University in Religious Studies with a specialization in Theological Ethics and a sub-specialization in Bioethics. She is a faculty member in the Theology Collaborative for Ascension Health Care USA, where she teaches an online course on Moral Theology and Catholic Social Teaching for Ascension Health Care Executive Leaders. During the summers, she teaches the course Moral Questions in the Black Community at the Institute for Black Catholic Studies at Xavier University of Louisiana. She is an author, national, and international speaker.