The birth of a child, especially a male child, always brings joy to the family in South Asian countries like India. The family celebrates the event by distributing special sweets in the neighbourhood and by bursting crackers. A woman who gives birth to a male child is given respect in society whereas the woman who gives birth to a female child is often scorned upon. As a result, even for an ordinary family, the birth of a male child is very significant. It calls for rejoicing and great celebration. Though Christianity affirms equality and dignity of the female and the male both in creation and in redemption, at the sociological level, Christians too succumb at times to the son preference due to the patriarchal culture that still persists in South Asian countries.

The first reading and the Gospel of today are centered on the birth of a child. Both happen to be male children. However the joy and the mood of celebration which the readings evoke in the hearers are not because the children born are males but because of the role they are called to play. Both are portrayed as descendants of David and are expected to bring everlasting peace, shalom or wellbeing for people who live in darkness.  Who are the ones who live in darkness in our world today?

I think, most of us are in one way or another are in darkness, are in need of peace due to the ever increasing violence in our world. The refugees, the asylum seekers, and the people who are forced to flee their land are all in darkness. Think of the millions of Rohingya Muslims who underwent untold suffering in recent months! It is not only the victims of injustice, violence, oppression and poverty who are in darkness but also the people who unleash terror like the ISIS, those who accumulate wealth and promote aggressive capitalism and thereby cause poverty, hunger and disease in our globalized world. All of us are in need of the light and shalom brought by Jesus.

Though Luke may not be historically correct in placing Jesus’ birth during the time of emperor Caesar Augustus who issued a decree for a census of the whole world, he seems to be signaling to the readers the significance of Jesus’ birth for the entire world. Though he is born under Roman oppression, Jesus would overthrow the powerful and raise up the oppressed as Luke has already indicated through Mary’s Magnificat.

In contrast to the present day child births taking place under medical supervision in special maternity hospitals, the birth of Jesus takes place almost on the road without the assistance of a midwife or the presence of an elderly woman. The biblical author merely says, ‘she gave birth to a son, her first born.’ Further ‘she wrapped him in swaddling clothes and laid him in the manger, because there was no place for them in the inn.’

By saying that there was no room for them in the inn, Luke indirectly hints the failure of humanity to receive Jesus which invariably led him to his eventual crucifixion. This verse also reminds us of what prophet Isaiah spoke, “The ox knows its owner, and the donkey its owner’s manger, but Israel does not know, my people do not understand” (Is. 1:3).

Who are the first recipients of the good news of Jesus’ birth? They are the shepherds camping in the countryside nearby.  Shepherding, as it is today, was not a dignified profession; it was a despised occupation at the time. The shepherds were scorned as shiftless, dishonest people who grazed their flocks on other people’s lands. Even today it is the illiterate and the poor who takes up this job.

What does the various images and symbols found in the Christmas story convey to us? Manger signifies the humble origins of Jesus and good news given to the shepherds is a clear sign that Jesus is sent to the lowly and the outcast. Of course, there is a reversal of values taking place with the birth of Jesus. What was considered despised takes the center stage, the lowly are raised and the proud ones are brought low.

The Christmas story begins with Caesar Augustus but ends with the shepherds visit to the birth scene in Bethlehem. The Angels announce the good news. The effect of good news is joy for all. The birth of Jesus is a sign of God’s abundant grace. Therefore joy and celebration are the only appropriate responses to this news.

The story also invites everyone to go to Bethlehem. It is a place where God came to us through the birth of a child, a place of mystery and wonder… But how will we get to Bethlehem? The magi were directed by their learning… Mary and Joseph were forced to go because of the census. The shepherds go by a dramatic heavenly revelation. What about us?

At Bethlehem we witness the scandal of the Christmas story. God came into human history completely helpless as a new born and was laid in a feeding trough. God slipped unassumingly into a small village far from the seat of earthly powers. He was born to a young couple who were only betrothed. No elaborate preparations were made for the birth. God was born on the road. The crib was a feed trough; the visitors were despised shepherds, not kings. By entering the human history this way, God identified with the powerless, the oppressed, the poor and the homeless. Among them, God could do the divine new work.

Jesus’ birth reveals a new world order, a world not under Caesar but under the direction of God’s design for the redemption of all peoples. In this world, God’s Word is heard by the humble. There is place even for the shepherds. There is hope for the oppressed. God has not forgotten us or abandoned us to the brokenness we have created. The story of Christmas is both an announcement of hope and a call to humility.

The first reading of today is filled with images.  But the image alone cannot change the world. Deliberation, planning, and hard work are required. However, images, like ideas and commitments, fuel the imagination which stimulates planning and action. This ancient song from Isaiah helps us to understand the deeper meaning of Christmas. The birth and its celebrations are signs of hope. It helps us to trust and gain confidence in God’s future. God’s will for justice, righteousness and peace is made flesh in the weakest of human creatures, a little baby.

Let us pray that shalom brought by Jesus be an experiential reality for all of us during this Christmas. 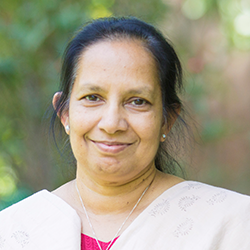 Shalini Mulackal was born in Kerala, South India, into a Syro-Malabar [one of the three Catholic rites in India] Catholic family. After completing her Higher Secondary education, she joined the Presentation Sisters and opted to be a missionary in North India. After completing her Masters in Theology, she did her Doctoral studies in the University of Madras and did her research on Religio-cultural practices of Catholic women of Dalit origins in Tiruvallur Dist., Tamil Nadu. At present she is a Professor of Systematic Theology at Vidyajyoti College of Theology, Delhi. She is also a visiting professor to a number of other Seminaries and Theological Institutes in India. Currently she is a member of the Indian Theological Association (ITA) and has served the Association as Vice-President and also as its first woman President. She is also a member of the Indian Women Theologians Forum (IWTF), Ecclesia of Women of Asia (EWA) and served as coordinator of both. She is the chair person of Centre for Dalit Studies (CDS) Delhi. She has published a number of articles with special emphasis on women empowerment in Church and Society. Her publication includes a contribution to the Dalit Bible commentary series where she has written the commentary for the books of Ruth, Esther and Judith from a Dalit perspective which has been published by CDS as Volume 6 and another commentary on Minor Prophets as Volume 20 of the same series. She has also edited three books of the Indian Theological Association. Besides, she regularly presents papers at national and international seminars mostly from a feminist perspective. She takes keen interest in many social issues affecting the poor in general and women in particular.