In that doing, however, each experienced here some ‘in-breaking’. Mary and Joseph wondered, ‘amazed’ at what was being said of the child. Simeon ‘guided by the Spirit’ blessed God, proclaiming that his eyes had seen the promised salvation. And Anna, the devout widow and prophetess, began to praise God and tell everyone of this child (the first woman preacher?!) Certainly there is more afoot here than the law prescribes. The fifth person in this scenario, this mere infant… merely sleeps.

‘Doing what the law requires’ is not usually a prescription for ‘spiritual awakening’, for a deepening of our spiritual life. We are told rather to ponder the scriptures, engage in contemplation, read holy books – all very good and necessary things to do, but generally our  ‘pursuit of holiness’ is not defined in terms of ‘doing what the law requires’. Sometimes, of course, the law – as Dickens famously wrote – the law is an ass. And it doesn’t fulfil, but constricts.

But there are other times when just the pure, direct, simple, obedience to ‘all that is required’ – can work its own transformation, holding us  ‘attentive’ and ‘upright’ in the eyes of God, of one another – and even within our own hearts.

Isn’t that what we do in families, in parish or religious communities? We engage day by day in ‘doing what is required’, tending to the young, seeing to the needs of the elders, feeding the hungry, consoling the afflicted, saying the prayers, all without too much attention, perhaps somewhat asleep ourselves.

I read a story once about an elderly man who had suffered from Alzheimer’s for many years. His family cared for him, doing - in a very difficult situation – what the law required – with never a response from him. But it seemed that just before his death, in a few moments of lucidity, he was able to thank them for all of their care for him.

Some ‘do what the law requires’ for many years at home, at work- with hardly a nod to their efforts.  Some maybe even with a rejection of their efforts: ‘Why did you come searching for me?’ But the promise of this Gospel, of this entire Christmas season, is that our human lives have become a site of divine revelation, that within our human flesh, a divine child sleeps.

We speak often in theology or spirituality of a divine indwelling. It can be hard for our imaginations to assimilate such a concept. ‘God is so big, so huge’ (as Monty Python once put it!) But a tiny sleeping child, indwelling – perhaps that is not so difficult to imagine.

The law of Simeon and Anna, of Mary and Joseph was the Torah. The law which their sleeping child was to enact in his living and dying is a new law whose measure we constantly seek to appropriate in the daily dying and rising of our own lives.

In the last section of this gospel, we are told ‘When they had finished everything required by the law of the Lord, they went back to Galilee, to their own town of Nazareth – to the cooking, the cleaning, and the carpentry. At the end of this joyous Christmas season we will return to our own towns, to the ordinary-ness of our daily routines and rituals. And again give ourselves to ‘doing what our law requires’ to those acts of love and care that we undertake, often with little awareness of their power of transformation. But perhaps in a new way – in the grace of this season – the manifestation of the divine indwelling of a ‘sleeping child’ will bring us like Mary and Joseph to wonder and amazement at the gifts we have received, like Simeon to the recognition of our salvation, and like Anna, to the voice of our own prophecy. 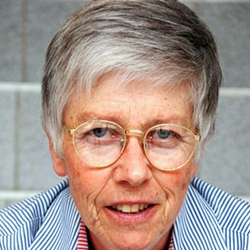 After completing my MA in 1982, I was missioned by the IHM’s in 1985 to South Africa where I have worked ever since, initially in both pastoral and academic work, but since 1995 primarily in academics. I have lectured in liturgy and spirituality, and as other needs arise in our small College, various other areas of pastoral theology and scripture.