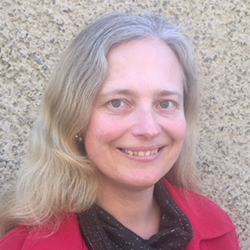 Dr Annemarie Paulin-Campbell is a South African Catholic laywoman who has been working in the area of Ignatian Spirituality for the past twenty years.  She heads up the Spirituality work of the Jesuit Institute South Africa which is based in Johannesburg.  She has a Masters degree in Educational Psychology from the University of the Witwatersrand and Master of Arts Degree in Christian Spirituality from Heythrop College, University of London. She has a doctorate in the interface between psychology and spirituality from the University of Kwa-Zulu Natal. Her doctoral thesis was on shifts in image of God and self in women making the Spiritual Exercises. Her primary work in the Jesuit Institute involves the training and supervision of spiritual directors and the giving of retreats including the Spiritual Exercises.

She is a regular guest director at the St. Beuno’s Retreat Centre in North Wales and is an editorial correspondent for The Way Journal of Spirituality. Annemarie has contributed to several books, most recently co-authoring a book of Lenten Reflections: Long Journey to the Resurrection with Fr Nick King SJ.  She has authored a number of articles relating to the training of Spiritual Directors in the South African context. Annemarie has contributed to international conferences and consultations in the area of Christian Spirituality in the United Kingdom, the United States; Rome, Spain, Ethiopia; Kenya and Zimbabwe.  She is a contributor to the website Spotlight Africa, an online news platform which covers issues of relevance to the Catholic Church in Africa. She also does some work privately as a psychologist and life coach. She is God-mother to six children.

Solemnity of the Immaculate Conception

How do we grapple in our own annunciation moments when our former understanding of our future is shattered and a new one is held out in invitation?