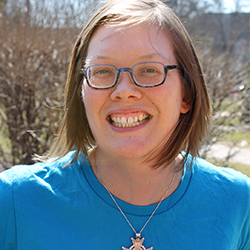 Julia Walsh is a Franciscan Sister of Perpetual Adoration who ministers as a retreat director, educator and spiritual writer. She earned a BA in History and Education from Loras College (Dubuque, IA) in 2003. While a student at Loras, Julia studied abroad in South Africa and realized her passion for social justice and Gospel living. After graduation Julia interned with the Iowa Catholic Conference and then moved to California and joined the Jesuit Volunteer Corps. As a Jesuit Volunteer, Julia worked with young parents and their children transitioning from homelessness to self-sufficiency.

As a Franciscan Sister, Julia has taught in Catholic high schools and has served on the staff of a spirituality center.  In 2017 Sister Julia earned a MA in Pastoral Studies from Catholic Theological Union (Chicago, Illinois).

Her writing has appeared in Global Sisters Report/National Catholic Reporter, Living Faith Catholic Devotionaland elsewhere. She is currently working on her first book, a memoir about her time in the novitiate and the brokenness of the Catholic Church. Sister Julia enjoys camping, cooking, traveling, watching movies and spending time with her Franciscan community, family and friends. She lives in Chicago.

Let us also see the kingdom of God around us and live like the saints we were made to be!