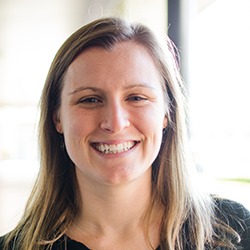 Elizabeth Mueller Stewart, a St. Louis native, graduated from Cor Jesu Academy in 2006. In 2009, after living in El Salvador with the Casa de la Solidaridad program (Santa Clara University), she earned her Bachelor of Arts degree in Justice & Peace Studies at Marquette University. Following undergrad, she joined Jesuit Volunteer Corps Northwest for a year in Washington, then went south for warmer and sunnier weather in Berkeley, California. In 2014, she graduated with a Master of Divinity from the Jesuit School of Theology in Berkeley.

Beth is the Director of Service Learning at a Catholic high school in the Bay Area. She just married Dan Stewart.

She would like to thank Stephanie Hwang, Molleen Dupree-Dominguez, and Kate Walsh-Cunnane for their editing and support throughout this process.

Solemnity of the Nativity of St. John the Baptist

When we know our truths deep down, especially when these truths come from the sacred space in our hearts where God speaks to us, we must speak.