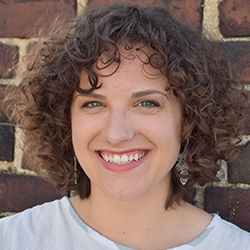 Elizabeth Turnwald is a current Jesuit Volunteer in New York City. She lives in a nine-person intentional community in Harlem and is the Retreat Coordinator and Conflict Resolution Program Assistant at the Tanenbaum Center for Interreligious Understanding. A graduate of the University of Dayton, she holds a B.A. in Music and in Spanish with a minor in Women’s and Gender Studies. Her undergraduate thesis, entitled “Thy Kingdom Come: Catholicism and the Nueva Canción, 1966-82,”explored the intersection of Latin American protest music, politics, and Catholic liturgical practice. Liz served as an Undergraduate Music Minister throughout college and most recently as the Counselor for Liturgy and Prayer Life at Tecaboca Catholic Camp and Retreats in Mountain Home, Texas. Grounded in her Marianist education, she is curious about vocation, mentorship, and the roles of women in the Church as a pathway to reform and justice. Originally from northwestern Ohio, Liz will continue to spread gregarious Midwestern hospitality with the East Coast as she pursues a Master of Divinity at the Boston College School of Theology of Ministry.

But the marvelous thing about God, this all-forgiving, all-patient Universal Love, is that even when we don’t answer “correctly,” she finds a way of repeating herself; and she will continue asking until we’re ready.