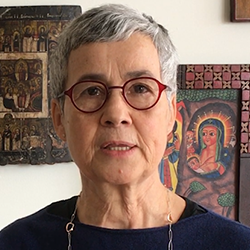 Paola Piscitelli is the President of the Community of Sant’Egidio USA, the American branch of the larger worldwide movement founded in Rome in 1968. A Public Lay Association recognized by the Holy See, the Community of Sant’Egidio is a movement with 70,000 members present in more than 60 countries in all continents. New communities and groups of friends of Sant’Egidio sharing a life of prayer, friendship and service to the poor are growing in the United States.  The charism of the Community can be synthetized by the words of Pope Francis in his visit to the community in Rome: Prayer, Peace and the Poor.

Paola joined the Community of Sant’Egidio while she was attending High School in Rome. She has been a member of it since then and has become president of its American branch in 1993.  As such she has coordinated the service programs and the growth of the Community in the United States through seminars, retreats, presentations and lectures. As all the members of Sant’Egidio her commitment with the community is totally volunteer.

Since 1986 she has been active part of participated at several interreligious meetings in Europe and Middle East, among which we may remember the one in Jerusalem (1996) and one in Warsaw, Poland in 1989. Since 2002 she has organized a yearly Vigil of Prayer for Peace in New York in concordance with other world initiatives of the Community.

Paola was born in Rome, Italy where she lived till 1993. She has been living with her husband and her two children in New York City since then.

May we be able to accept the embrace and words of the Father and may we witness the same welcome and joy to those who are excluded.