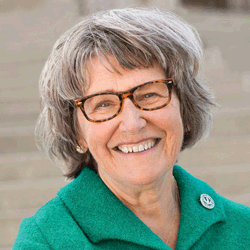 Sister Simone Campbell (a Roman Catholic Sister of Social Service) is a religious leader, attorney, and author with extensive experience in public policy and advocacy for systemic change. For almost 17 years she was the executive director of NETWORK, Lobby for Catholic Social Justice and leader of Nuns on the Bus. In 2010, she wrote the “nuns’ letter” that was seminal in the passage of the Affordable Care Act. She has twice spoken at the Democratic National Conventions, appeared on numerous television and radio programs and received many awards including a “Franklin D. Roosevelt Four Freedoms Award” and the “Defender of Democracy Award” from the Parliamentarians for Global Action. Prior to her work in Washington, this native Californian did interfaith state-based advocacy in Sacramento and for 18 years was the founder and lead attorney at the Community Law Center in Oakland to serve the family law and probate needs of working poor families in Alameda County.  Her two books, A Nun on the Bus (2014) and Hunger for Hope (2020), are award winning reflections on the substance of her life and the call to faithful justice seeking.

Let us have space for those who disagree and find our connections before the Divine together in a love that overflows all bounds.

Well, what I’ ve realized is that wearing ashes on this day is like being at a rally. It’ s seeing all those who share this communal commitment to conversion during these six and a half weeks of Lent.