For me, there is perhaps no group of people more fascinating, complex, and wonderful than teenagers. I’m not a mother myself at this point, but throughout the past 8 and a half years, it has been my great joy and privilege to walk alongside hundreds of young women and men navigating the unique craziness of high school life.

Right out of college, as a clueless, hopeful 22 year-old, I spent a year serving with the Jesuit Volunteer Corps in Houston, Texas. My work each day included teaching drama and coordinating campus ministry at the then-brand new Cristo Rey Jesuit, a college prep high school for low-income, at-risk youth. That’s how I met Juan. Creative, compassionate, overflowing with energy, Juan is one of the funniest human beings I’ve ever met. His mother, an amazing woman from El Salvador, worked tirelessly to provide for her son on her own. She had fled with Juan from her husband who drank too much and had physically and verbally abused her. Cristo Rey was Juan’s chance to create a new life for himself and his family.

By the time he had gotten there, though, Juan was several grades behind in most subjects, and was battling severe, undiagnosed ADHD. He was popular, and waffled between messing around with the “cool” kids and reaching out to students who needed a friend. Though he brought joy to many people in our school, Juan clearly was weighed down by the messages he had taken in throughout his life – that he was just a poor kid from Houston, that he wasn’t smart enough to amount to anything, and his biggest fear, that he might not ever be better than his dad.

I didn’t teach Juan in class, but he often visited my room to talk about life, give me updates, and joke around. At some point, it struck me that this kid had no idea how absolutely amazing he was. He had not realized that he was known by God, loved by God, and called by God. So I made it part of my mission that year to try to show him somehow. We celebrated his little victories, and I called him out when he wasn’t doing his best. I listened to his stories and encouraged him to write some down. Juan and I worked together every single day of summer school. Other adults rallied around to support him too. By the end of his sophomore year, Juan received an award for being the most improved student in the school. And this year, he’ll graduate from college.

When I began my ministry at St. Ignatius College Prep six years ago, I experienced a bit of culture shock at first. Our school is blessed with stunning spaces, a rich history, and an abundance of resources. Most, though certainly not all, of our students come from upper-middle class white families whose experiences are quite different from Juan’s. For awhile, I found myself getting caught up in those differences. But as I have met and worked with and loved my astonishing students at St. Ignatius, some common themes have emerged – the messages some of them have taken in throughout their lives:

that they are defined by what they have, or what they don’t have,

that they are limited to what others believe about them,

that they will never be enough as they are.

Like Juan, these students, too, need mirrors to remind them of who they are: known by God, loved by God, and called by God.

We witness in this first reading a trio of relationships: a young man named Samuel, his mentor Eli, and an ever-persistent God. As we see so often in Scripture and in our own lives, God calls out again and again to this unlikely candidate. God’s Spirit longs to speak in and through this young person’s life. Granted, it takes a few tries, but our God is not easily deterred. God communicates through Eli, a model minister, in my view. See, Eli’s role is clear – he helps to create space for his mentee and God to encounter one another. Then he gets out of the way. And Eli’s advice is simple:

Samuel, you are called to serve God.

You are called. Invite God to speak.  Then listen.

As we enter into this week, then, we might consider a few questions for reflection. First, who have been the Elis in our lives – those people who have been mirrors for us, reflecting back to us that we are known, loved, and called by God? I can think immediately of former campus ministers and teachers, and students, too, who have helped me come home to myself. Who have been our Elis? And how might we express our gratitude for them?

Second, for whom are we called to be Eli? That is, how have we witnessed God working in and through someone who might not see herself or himself that way? How can we affirm the goodness in others and encourage them to respond to God’s call? How can we be like Eli?

And finally, a reminder: God does not only call the young! No matter our age, relationships, and experiences, God continues to reach out to each and every one of us. My spiritual director defines the practice of discernment as “poised readiness” – that’s a tough one for me. Poised readiness: Invite God to speak. Then listen. Perhaps the older we get, the more challenging it can be to open ourselves up this way. It’s hard for adults to take in and sort through God’s ongoing desires for us. Can we trust that we are always known and loved and called? Can we open our ears to that call and respond honestly to God, “Speak. Your servant is listening.”? 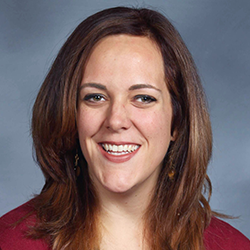 Katie Davis is  passionate about spirituality, social justice, and the arts.  Hailing from the Philadelphia area, she earned a Bachelor of Music  degree in musical theatre at The Catholic University of America. As a Jesuit  Volunteer living in intentional community, Katie served as the drama teacher  and campus minister at Cristo Rey Jesuit in Houston, followed by several  years of parish youth ministry in Cicero, IL through the JVC Magis program.  Katie earned her M.Div. at Loyola University Chicago and has worked  as a chaplain and religious studies teacher at St. Ignatius College Prep in  Chicago since 2012.

Katie cherishes  volunteering with the Ignatian Spirituality Project and with Harmony, Hope  and Healing, building relationships with people experiencing homelessness  through retreats and music. Katie serves on the Advisory Board for Jesuit Connections  and has relished opportunities to collaborate with the 8th Day  Center for Justice, Charis Ministries, Ignatian Solidarity Network, and her  parish, Old St. Patrick’s Church. Music and theatre continue to be central to  Katie’s life and ministry.

In addition to the  communities listed above, Katie is deeply grateful to her family, her partner  Kevin, and her mentors and friends from Merion Mercy Academy, BVM School, and  Young People’s Theatre Workshop in PA, all of whom have encouraged her to  cultivate and share her authentic voice.