Greetings on this feast of the Epiphany from Harare, Zimbabwe, a country that has been experiencing historic changes. This feast, a missionary feast, is also about change – personal change as well as social transformation.  The Epiphany has added meaning for me because it is also the anniversary of the founding of my community – the Maryknoll Sisters of St. Dominic.  On January 6, 1912, three women arrived at the train station in Hawthorne, New York, to assist the newly formed mission movement that would become Maryknoll. These three wise women, as we call them, had followed their star and became the nucleus of the first community of women religious missionaries founded in the United States. Their lives were profoundly changed by that journey. That change spread to thousands of people worldwide through the mission outreach of Maryknoll.

The Gospel today tells us of wise men, who followed a star that led them to the Christ Child in Bethlehem.  We don’t know much about them. We are told that they came from the East and brought gifts of gold, frankincense and myrrh but we don’t know where they came from or even how many they were.  We don’t know how far they travelled and what dangers they faced on the way. We can imagine the courage it took to leave their homes and travel to an unknown destination with only a star to guide them. And we can imagine the radical change that this journey brought into their lives. We can also imagine the lives that were changed when they returned home and told others of their experience. They were the first missionaries!

Like the three wise women of Maryknoll and the wise men in the gospel reading, each of us have our own star to follow that speaks of our calling to spread the Good News of a God who becomes one with us; a God of all people, classes, races, nationalities, and genders – a God who makes all things new.

The next part of today’s reading is more ominous.  The magi are warned in a dream to return by another route.  We are told that Herod, the ruler appointed by the Romans, “will seek the young Child to destroy him.” Herod, like so many rulers in the world then and now, feared losing his wealth and power. Warned by an angel in a dream, Joseph, Mary and the child Jesus escape death by fleeing into Egypt. Like thousands of people on the move today, they became refugees in a foreign land.

We see such scenes daily on the television news or on our phones as children and their parents flee wars in Syria, Yemen, Somalia and South Sudan. We see migrants fleeing violence and poverty in their countries to risk drowning on rubber rafts or overcrowded boats on the Mediterranean or being sold as slaves in Libya.

The first reading from Isaiah speaks of “darkness covering the earth”.  Surely we are witnesses to darkness in our own day. You can name the darkness surrounding you and I can do the same but I want to focus on the next part of the reading from the prophet Isaiah that offers hope.

He tells us: “The Lord’s light shines on them, and other nations shall walk by their light.” Each one of us is meant to be a bearer of that light. We are called to shine a light in the darkness, to bring hope and healing to our fractured, divided, violent world. Yes, each of us can bring change to a situation, no matter how entrenched or impossible it seems. I have seen that happen recently in Zimbabwe where people helped to bring about a peaceful change of government, together with the army, and are working together to create a better life for all Zimbabweans. The flag was a symbol of liberation – not guns, or bombs, or drones or other weapons, but a flag!

As Gandhi said, “Let us BE the change we want to see in the world” and let us shine the light of our stars on people in need, whether in Zimbabwe, New York or Alabama. In the wonderful words of Pope Francis in the Joy of the Gospel: “May the world of our time, which is searching, sometimes with anguish, sometimes with hope, be enabled to receive the good news not from evangelizers who are dejected, discouraged, impatient or anxious, but from ministers of the Gospel whose lives glow with fervor, who have first received the joy of Christ.” (#10) 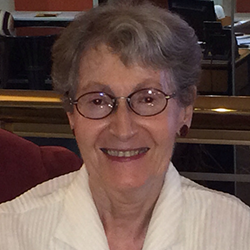 Janice McLaughlin, MM, is a journalist, adult educator and promoter of peace and justice who has lived and worked on the African continent since 1970, in Kenya, Mozambique and Zimbabwe. She was arrested and deported from white-ruled Rhodesia in 1977 and then ministered to refugees from the war in that country. She returned after independence to help establish a new system of education that linked academic with practical subjects.

Janice is currently working to combat human trafficking in Zimbabwe with the African Forum for Catholic Social Teaching (AFCAST), a regional network of nine countries in East, Central and Southern Africa. She also serves on the Research Board of the Catholic University of Zimbabwe. She has a BA degree in theology and anthropology from Marquette University and a doctorate in Religious Studies from the University of Zimbabwe. She was made a Distinguished Daughter of Pennsylvania in 2014 and is the author of numerous articles and several books including Ostriches, Dung Beetles and Other Spiritual Masters. She served as President of her congregation, the Maryknoll Sisters of St. Dominic, from 2009 to 2015