The people who have walked in darkness have seen a great light!

In the northern hemisphere where I live, we are right in the middle of the cold, dark winter. We live in a world wrecked with violence, fear, poverty, exploitation, human trafficking, starvation, greed, deception, mass incarceration… racism, sexism, malnourished children. . . .The list is seemingly endless. Yet, we are Children of the Light. We believe in this gospel of light and love that can transform us all into Resurrected people, freed from all fear and divisions, freed from all human limitations.

Ordinarily on Sunday mornings, I am breaking open our Word of God with my incarcerated sisters and brothers in a prison. Prisons can be some of our darkest places. Yet, I don’t see the darkness, and I do not recall the darkness when I reflect on my visits. I see the light and the hope in the sisters and brothers that I pray with every week. I see a hope that abounds in the midst of incredible odds.

Perhaps the best example of hoping against hope is in my friend Chloe. I met her during a retreat I led with a group of women in graduate school. I was so struck by her genuine joy and enthusiasm. When the retreat was over, Chloe came over to me to thank me for coming and for being a part of the retreat team. Then she invited me to return to the prison sometime soon to lead a retreat of my own design and she said, “Bring your friends.” Chloe left me tongue-tied, which is not an easy feat. When the chaplain came over to me at the end of the evening, she said ,“So what did you think about the retreat?” and I told her of Chloe’s invitation. The chaplain just smiled and said, “You know, she’s a lifer” and my jaw dropped. A lifer means that she is serving a life sentence.

I wondered how on earth Chloe could possibly remain so hopeful, so filled with life, and so welcoming to me. Chloe welcomed me to a place where she was trapped. For life. I cannot imagine how it feels to be locked up for the rest of my life. Chloe’s invitation became a voice in my head and a prayer in my heart. I thought about her all the time. I felt as if Jesus were inviting me to follow him and return to that horrid, huge, dark state prison! I felt drawn to the light that was there in the darkness. I did return, just six short weeks later, to lead another retreat, with eight friends. And, because we believe in hope, in a God of love who never abandons us, there was a miracle that occurred for Chloe.

Chloe was granted Parole in 2015 after serving 21 years . . .and Chloe was released from prison in May of 2016! She is working hard to support herself. She is filled with light and joy. Chloe learned how to spread light in absolute darkness. And now she continues to do so beyond the four prison walls.

Would you go with Jesus? He is the traveling healer walking all over the country meeting people that no one else wants to talk to. He roams the streets. Could you spend your life living in a tent like a migrant or a person who was homeless to be with those on the margins? Do you know anyone who has done this? Do you know any missionaries and/or a volunteers? What called them to do this?

If Jesus were here today where would he live? Who might he talk to? Who might need his love the most?

I have had the privilege of spending time on the margins in homeless shelters, nursing homes, schools, orphanages, soup kitchens, detention centers, prisons, and communities that literally live in piles of garbage. These kinds of places really make me stop and wonder, “Why, God?” How can I have had enough to food to eat, a good education, a safe place to play,a roof over my head, clothing to wear, access to healthcare, a loving family, and technology to use, when so many millions of people on this planet never will? How can I preach the Gospel when there are so many people waiting. Waiting for treatment, waiting for a job, waiting for a break, waiting for freedom. . . . Life can be miserable.

We Iive in the light!

We are children of the light!

The Reverend Dr Martin Luther King, Jr. said, “Darkness cannot drive out darkness. Only light can do that.”

Light doesn’t have as much work to do to dispel darkness. The light just needs to shine even the tiniest of tiny specks.

One of my favorite theologians, Dr. Richard Lennan, says that light is favored over darkness. “For darkness to win, it must win 100 percent. But for light to win, it only needs to win 1 percent. Those are good odds! Light can spread so quickly.

We are children of the light.

Where is there light in your life? Even on these dark, cold days in the northern hemisphere, the sun still rises. We might not have bright, warm sunlight, but during the daytime hours, even on cloudy days when we cannot see the sun, the sun is there. Jesus is here for us, calling our name, inviting us to follow him. Even if we cannot see him, we know he is there, whispering to us “COME LIVE IN THE LIGHT. . . . We are called to act with justice, we are called to love tenderly, we are called to serve one another, to walk humbly with God!” 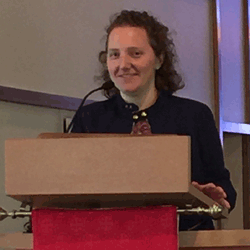 Jocelyn E. Collen has a Master of Divinity from Boston College School of Theology and Ministry. She studied Theology at Fairfield University as an undergraduate with Paul Lakeland and Nancy Dallavalle. She holds a Post-Masters Certificate in Spiritual Formation from Boston College. Jocelyn is the Religious Educator at the Kennedy Day School, the Faith Formation assistant at St. Ignatius of Loyola Parish, and is currently serving on a ministry team that presides over Communion Services in a prison in Boston, Massachusetts. She is an executive member of the FutureChurch Board of Trustees.