Today we hear of remnants, of foolishness, of God’s wisdom and tenderness--and in our Gospel, the beatitudes, that is, Jesus’ understanding of God’s agenda and who really are first in importance. Our readings from the prophet Zephaniah and the letter to the Corinthians already challenge our day-to-day assumptions, as they were meant to do in the times they were written.And then we have those remarkable beatitudes, part of what you might call Jesus’ Inaugural Address as he initiates the New Covenant.

Consider the lowly. God’s watch over the remnant, the ones who will prove to be the most faithful even though they are the lowest in social status and the most sinned against and the outsiders and left-overs. They are called the anawim of God, and Zeph declares that they will be the firm foundation of the New Israel.

The lowly. Being not so far from Christmas, we remember the hymns and carols we sang—and lots of them have the words “lowly” or “lowliness” in them. This is pure romance. Lowliness is not lovely or of itself doesn’t confer holiness on anybody.

The Old Testament story of the Babylon captivity tells us that when the enemy conquered the nation and destroyed Jerusalem and carried the population and all its treasures and possessions into slavery—the lowly ones, the poor of the land, were left to make do, make what life they could in the rubble of towns and the decimated fields of grain; The lowly were not even good enough for slavery!

So, who are the lowly in our world? Well, you know where not to go in your city. You don’t want to be in their neighborhood. In Jesus time: lepers, tax collectors and sinners—in our time, high school dropouts dealing drugs as their only source of cash, the neglected elderly, the men who live under the bridges, the dumpster divers—and all over the world refugees from wars and terror that have sent them fleeing, homeless, unwelcomed, stopped at some border with nothing left but fading hope.

And then there are Paul’s beloved but exasperating Corinthian Christians, who like to boast about their spiritual gifts; and groups of the converted who were tussling with each other about their standing. Paul reminds them that in the bustling city of Corinth, they are viewed as lowborn and uneducated—“foolish” is Paul’s word—and that God’s wisdom prefers it that way. So if you have any claim to swaggering around all puffed up, it’s only God you have to thank.

And then come the beatitudes, consoling and hopeful. Some of Jesus’ first words about the New Covenant. There are several lovely musical settings that are so poetic and uplifting and inspiring. But strip away the music, don’t get all caught up again in romance. Without the harmonies and the upbeat lyrics, they’re really pretty stark. Listen again. Consider again.

Now you’re one of the poor as in Luke, or one of Matthew's poor in Spirit—this is not an honor, or something to aspire to-- it’s more likely a result of your misfortune-- because your spirit has shriveled as you’ve spent a life of worry and scraping to feed your family, and there is simply nothing left in you that offers the leisure to gather round the fire and sing, or the time and means to celebrate the feasts devotedly, or make plans to improve your lot.

I wonder how you’ll take the news of your blessedness. Here’s my guess. (Eyebrows up, mouth agape): Blessed? How dare you tell me my life is blessed!! That I’m one of Gods favored? That I’m going to possess the kingdom of God? Tell me how, then, because I haven’t seen any kingdom around here. It’s all in the hands of the rich people, the landowners, and its gates are guarded by the know-it-all Pharisees who look down their noses at us. Kingdom? Blessed? Get over it. God hasn’t been interested in us for a very long time.

And the mourners? You can talk about comfort…Does anyone really stop mourning the loss of loved ones? How can you comfort a widow whose spouse’s death has ripped out her heart? Who can comfort a mother who loses her babies, one after another? We have arms to embrace and food to bring over, small comforts. But you can’t bring them back—and that’s the comfort they want. So where’s the blessing?

And the meek? Inherit the land? The powerless, the paupers like us? Our own rich people steal our tiny plots out from under us, and in comes Caesar and his bullying troops and there’s nothing we can say or do that won’t get us run through with a sword. Afraid you’re starting a rebellion.

Justice? There is none—it is as the prophets always said. No justice, no peace, no return of stolen goods or lands, no payback for the swindled and the preyed-upon, like widows and orphans. No just judge that will hear us, no lawyer to take our side. Where are God’s prophets now to preach about how God favors us and show us just how that plays out.

Suffering people of every place and time are not likely to call themselves blessed. They find no shred of grace in their poverty, their losses, and the ill-treatment they bear. They live in fear and on the edge of despair. Their labors are hard, their earnings never enough to cover their basic needs, to fill their hungry children, to pay the past-due rent and keep the lights on.

The point is, the beatitudes are really not about happy people. One must be very cautious if suggesting to the discouraged and hurting that they are O so blessed because they’re in this lousy state of affairs.

So—are the beatitudes about us?

Farther down the list, we can see work that we can aspire to—the mercy, the uprightness of heart, the peacemaking. And there is no doubt that we are inescapably called to be voices for the voiceless, and to suffer for it.

But what we can’t allow ourselves to get stuck in, is as before with “lowly”--either romanticizing the beatitudes, or spiritualizing them—that is, work on them as virtues, or as states of soul to be practiced diligently so we become more Christlike. …let’s see….how should I work on lowliness, how can I be more poor, or practice poverty of spirit, or be more meek and humble…and so on.

Instead, I think we have a different calling. Or drenching. It’s Baptism, and it immerses us in Beatitude—To me, this means we are the ones seized by and sent by Christ Jesus and the Spirit as blessing-- to be blessing and to give blessing to those who cannot see any blessing anywhere-- and try to be a living word of God to them by witnessing as Christ bearers. Paul says “Other Christs.”

There’s a phrase used by the poor, and perhaps by some of our own ancestors in times gone by or in the Great Depression. When the resources are running out, when there is little left in the coffers or the cupboard the woman will sigh, and then straighten up with resolve, and say, ”We’ll make do. We’ll just have to make do.”

This is exactly what God is about. What God has been up to for all eternity. Our great Lover, has by the mystery of Incarnation, and the victory over sin and death, erased the distance between us—that is between us and God, and also us and each other-- and decided to get impossibly tangled up with humanity— and most mysterious of all, to include us in this immeasurable magnificent out-pouring of love. Sharing it. Giving it away.

This divine project of enlisting humans is more than chancy. It’s divinely insane. We are absolutely not suitable for the honor or the labor. We’re always falling on our faces. We’re always making promises we don’t keep. We can behave so badly. After all these years we still haven’t convinced the world of God’s love and peace and justice. Why did God choose to make do with us? Had God run out of anything else?

Catherine of Siena asks God flat out: O Mad Lover! And you have need of your creature? …you act as with you could not live without her, in spite of being the Source of Life itself…Why then are you so mad? Because you have fallen in love with what you yourself have made!… Catherine goes on to observe that God seems to be drunk with desire for her salvation.”You clothed yourself in our humanity, and nearer than that you could not have come.” (A drunken God. Well, that might explain it.)

So today, we’re offered this glimpse into the Mystery: God is “making do” by his covenant with humanity. It’s his show. We certainly don’t remember auditioning. We forget who we are. But God is remarkably persistent even though we, His human agents, and carriers of the good news, are reluctant, and wish we had the chance to say no a bit more loudly. But God so loves the little ones, poor ones, the sinned against and the sinners--and yes, us-- who are somewhere in there, but have this commission—Be who you are to show Christ to them.

There’s nothing to do but stand in wonder at God’s mad miracle of making do—and then get out there and bring blessing.

After evening prayer, We Dominicans sing a hymn to St. Dominic . The last words we sing are these: ”Preacher of grace, unite us with the blessed”.

I used to think we were referring to the saints in heaven. Now? Not so much. 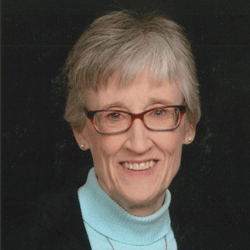 Janet Schlichting, O.P. of the Dominican Sisters of Peace, is presently working in preaching, art, and adult faith formation. She has an M.A. in Liturgical Studies from the University of Notre Dame and a D.Min. in Preaching from the Aquinas Institute of Theology. She has taught courses on the graduate level (Loyola/Chicago, Ursuline College, and Aquinas Institute) in the areas of liturgy and preaching, and has served as retreat center staff and on Dominican preaching teams for parish missions and religious community retreats. She has written for pastoral liturgy and preaching publications.