There is nothing more appealing than innocence.  That is why we pass baby pictures around and why we love to watch children in the lap of Santa Claus.  We treasure innocence because we know that it doesn’t last.  Soon our children will grow up, learn of danger, learn that they can be hurt, and discover that the world beyond them can be threatening.    Is it possible to experience evil and violence and remain untouched?  Is it possible to see or experience the depths of human hatred and not become cynical and distrusting?   Can innocence survive?

At the beginning of John’s Gospel we hear of a preacher in the wilderness who calls his listeners to repentance, who offers a cleansing ritual for those who are less than innocent., a baptism that symbolizes a change of heart. And in the midst of his efforts he sees someone approaching him.  “Look,” he declares.  “Look at the Lamb of God.” Translation:  Look at the one person  among us who  does not need to repent,-- not a child, but an adult—well aware of the violence and criminality  of others, and willing to live among us and change us. “Look,”  says John in the desert.  “Look at the Lamb of God.”  We know enough of the background of this text to remember that in the Exodus story, it was the blood of the lamb on doorposts that once saved the children of Israel from the Angel of Death.  And we remember the Suffering Servant of the prophet Isaiah who was compared to a lamb led to the slaughter.  And that the Crucifixion occurred as lambs were being slaughtered for the Passover Feast.  The scriptural reference to Jesus as the Lamb tells us something about the deep meaning of his life, of his crucifixion and how Christ saves us.  Innocent of all charges, —He responds to violence with prayer for his executioners.  We who remember his death know that we are not innocent.  We are in our own wilderness—and we need saving.

And so we pray: At every Mass Catholics are drawn into the presence of innocence when we say “Lamb of God, you take away the sins the world, have mercy on us.  Lamb of God, you take away the sins of the world, grant us peace.”  Jesus offers us mercy— and the peace for which we pray.  The Crucifixion is our rejection of His first self–offering, but in spite of   that rejection, he forgives—and calls to His Father to forgive. His innocence before the Law and His love for His persecutors is our salvation.

The image of the Lamb of God reminds us that we are saved—not by pain, but by love, by the love of Christ for His persecutors, by his forgiveness of all of us who are not very innocent and who may still believe that violence can expel evil—or what we perceive as evil.

Our response to Christ’s offer of forgiveness and shared love  must be gratitude, sorrow for how we ourselves have been persecutors, and hope for an end to the violence of human beings to one another—not just in the Roman Empire when crucifixions were common,  but in every place on earth where men and women must fear for their lives, where innocence is no protection against the violence of the powerful.

A significant feast is celebrated at the end of this week: the feast of another innocent: a young girl whose self- offering became famous in Christian history.  According to the testimony of the early Church, was murdered—presumably before a crowd—because she had dedicated her life to Christ –and resisted a forced marriage. Young women then—and perhaps even now--are not expected to resist cultural or political imperatives.  Whatever the details of her martyrdom, she is one of the earliest of a long line of  men and women who have died as witnesses to their fidelity to conscience.  She was not the first—nor certainly the last to resist persecution—not the first nor the last to be murdered by forces more politically powerful.   She is the elder sister of   the four  church women murdered in El Salvador   (Working with the poor, they were considered subversive), of  Sr. Dorothy Stang murdered  because of her protests against the violation of the Amazon rain forest and the people dependent on it,  of  Sr. Mariam Vattalil of India, murdered because  landlords were offended by  her work with the landless poor, of the  innocent in every land who have been brutalized by those whose are stronger-- and who have different fidelities. These and all who give their lives to the work of the Gospel are part of a long history of   men and women whose innocence—like the innocence of  Jesus, was no protection against the violence of those in power.

But strangely enough it is the blood of the innocent—not the violence of the strong -- that saves us.  Jesus is the Innocent One whose forgiveness gives us reason to hope and whose grace strengthens the weakest among us.  Like John the Baptist, we can recognize him in our own wilderness and know that the violence of our world will never be the last word.  The last word is mercy, for which we pray at every Eucharist—where we behold the Lamb of God, who takes away the sins of the world and who continues to offer mercy to those who love him.   John in his desert reminds his listeners: It is mercy that saves us, not political power, not military power, not our presumed sinlessness, not even our good works.  There is only one who is innocent before God.  And John calls us to see, to look at Him, to look at the face of mercy, to look to the One who alone can give us peace. 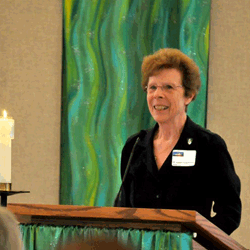 Diana Culbertson, O.P. of the Dominican Sisters of Peace is professor emerita at Kent State University where she directed the Undergraduate program in English, the program of Religious Studies and the graduate Program of Liberal Studies. She received her Ph.D in Comparative Literature from the University of North Carolina at Chapel Hill, her M.A. in theology from Aquinas Institute of Theology. She is the former president of the Colloquium on Violence and Religion and a Board member of FutureChurch. Her published works include The Poetics of Revelation: Recognition and the Narrative Tradition (Mercer UP); Rose Hawthorne Lathrop: Selected Writings (Paulist Press); Invisible Light: Poems about God (Columbia UP). She is a former editor and writer for the Center for Learning writing God in a World of Violence, The Meaning of Faith, The Meaning of Hope, The Scandal of the Parables, The Body of Christ, and Life in the World to Come . She has published in numerous literary journals and anthologies, and continues to write and lecture extensively.