I am a teacher of very little children. When my students arrived in my classroom this past September, they were either three or almost three, and on day one we went over the rules.

One of the most important rules that we learn is to keep our hands to ourselves.

The kids learned songs about this, we read rhyming books about it, and we even did a few very silly puppet shows about keeping your hands to yourself.

This year, after all of this wisdom had been bestowed, one of my students, Charlie, was tickling his friend Sam. And I said “hands to yourself!” Later that day he was playfully grabbing Sam’s arm, and I said, “hands to yourself!” Then finally, out on the playground, Charlie pushed Sam, hard. Pushed him right off the climber outside. And no book or song or puppet show taught, “hands to yourself” more effectively than Sam crying.

Sam was fine and Charlie apologized, but Charlie was devastated, and you could see it occur to him… “this is what Ms. Krane was talking about with the hands to yourself thing!” Charlie thought twice about pushing or hitting friends after that, remembering emotional moment with his friend.

In today’s Gospel, Jesus tells his disciples about some rules. He reminds them of the commandments, and seems to give a very strict and drastic version of them, saying, the old testament says, “whoever kills will be liable to judgment, but I say to you who ever is just angry at his brother is liable to judgment”. He says the commandment says, “you shall not commit adultery, but I say, who ever looks at a woman with lust has already committed adultery with her in his heart.”

But that sounds so harsh. I can definitely avoid killing people… but to not be angry? That’s a tall order.

But Jesus is just trying to give us this same lesson that Charlie in my class got the hard way.

We all know to keep our hands to ourselves, but sometimes, things happen and people get hurt.

We all know that it is wrong to be angry… but sometimes things happen and people get killed.

We all know it is wrong to look at a person with lust… but sometimes things happen, And people’s hearts get broken.

Jesus is pointing out, living a Christian life requires us to reflect on the more fundamental reason behind the rule.

We need to look down the road at the possible outcomes of our thoughts, our glances, and our careless words. Many little mistakes can often lead to a bigger one.

Whenever I think about times when I have hurt others, I can see that there is always a series of choices that got made leading up to that big hurt, and unfortunately those things were almost impossible to notice while they were happening.

The good news is that wisdom is knowledge born of experience. My student Charlie experienced what it was like to hurt someone, and he worked much harder to keep his hands to himself after that. We can look back at our mistakes, and apply that wisdom as we go forward, and not make those mistakes again.

Is this an easy task? No, because the world is not always an easy place to be. But what we can do is take it a day at a time, forgive each other, love each other, and hold each other accountable.

If we can do this, our Yes will mean Yes and our No will mean No and eventually, we won’t have to worry about as much the rules, whether it be rules in the classroom or rules for life. 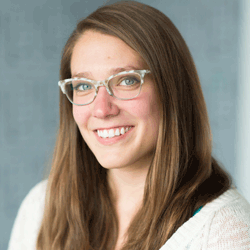 Anne K. Krane has a Master of Divinity from Boston College School of Theology and Ministry. She studied Theology at Fairfield University and is currently studying at the Lynch School of Education at Boston College. She teaches Pre-K at Saint Columbkille Partnership School in Brighton MA, where she also serves on the spirituality committee. She performs drama and workshops through the Catholic Chaplaincy at several prisons in MA and is a resident comedian at Improv Asylum in the North End of Boston.