Today we enter the season of Lent.  While this season has traditionally been known as one of repentance and penance, the liturgical readings for the Sundays of Lent suggest that the primary focus is the mercy of God in the face of human sinfulness.  This is not to say that repentance is unimportant -- it is.  However, repentance should flow from the realization of God’s steadfast love and mercy rather than from some debt we might think we owe God.  Today’s readings illustrate this.

The first reading, which consists of verses from Genesis, features several episodes: the creation of the first man; his placement in the garden; the creation of vegetation out of the same ground from which the man was made; the temptation of the woman; and the sin of both the man and the woman.  Any one of these themes could be the focus of our reflection today.  However, the passage from Matthew’s gospel describes the temptation of Jesus, suggesting that the prominent theme to be considered is temptation.  The snake engages the woman in conversation.  Why her and not the man?  This feature of the story has been variously interpreted.   Some maintain that it is because women are less astute and more inclined to succumb to clever conniving, a misogynistic reading that has no grounding in the biblical text itself.  Others counter this bias with a reversed sexist interpretation, casting the woman as the first theologian discussing the mysterious ways of God.

The choice of the woman reflects the strong wisdom character of the story.  Various features allude to this.  First, the snake is described as being “the most cunning of all the wild animals,” an allusion to wisdom.  Second, the discussion concerns the tree of the knowledge of good and evil, clearly a wisdom theme.  Third, the dynamic within this discussion is one of decision, an activity that reflects wisdom.  Finally, in the wisdom tradition itself, Wisdom is personified as a woman (see Proverb 1, 7-9; Wisdom 1, 6-10; Sirach 24).  Various reasons have been advanced explaining why Wisdom was personified as a woman.  The most commonly accepted explanation is that the ancient Israelites, or their ancestors, once revered a goddess of wisdom.  While this is most likely true, it simply begs the question:  Why female?  Probably because wisdom was the treasure most desired by this people, and it is reasonable that in a male-centered society, what was most treasured would be personified as a woman.  Thus, the choice of the woman rather than the man is in keeping with this particular biblical tradition.

Like temptation itself, the exchange between the snake and the woman is more subtle than it is direct, and she is caught in its subtlety.  He never really lies to her.  He tells her that if she and her husband eat, their eyes will be opened and they will know good from evil.  That is exactly what happens.  However, as is often the case with temptation, what happens is not what was expected, and it is only afterwards that they realize that they have made the wrong choice.

The temptation of Jesus is quite different.  His tempter is direct, not subtle.  In the face of temptation, Jesus makes the correct decision.  While the first woman and man desired to be like God, attempting to grasp wisdom in a manner contrary to God’s will, Jesus decided not to succumb to the temptation to use inappropriately the power that was his.  In the wisdom tradition, options are placed before us, along with a glimpse into the consequences of deciding in favor of one or the other.  The choice is ours to make.  It  is up to us to decide if the choice will be wise, or foolish.

Perhaps it is the psalm response that sets the tone for today’s reflection:

Have mercy on me, God,

in accord with your merciful love;

In your abundant compassion,

This opening verse contains two technical covenant terms: merciful or steadfast love (ḥesed) and compassion (raḥămîn).  Ḥesed is the kind of love that insists: ‘There is nothing you can do that will make me stop loving you.’  Raḥămîn comes from the word for ‘womb’ suggesting womb-love, a strong feminine image underscoring the intimate love a woman has for the child of her womb.  This love and compassion are characteristics of God’s attachment to us; they do not refer to any sentiment we might have toward God.  This psalm verse reminds us that the love and mercy of God are incomprehensible.

It is right that we begin our Lenten reflections with an acknowledgement of our propensity to yield to temptation, for without this acknowledgement we would not realize our need for God’s graciousness.  However, the Sunday readings prompt us to concentrate during this season less on our weaknesses and more on God’s steadfast love and mercy. 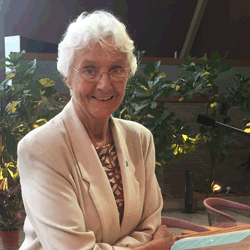 Dianne Bergant, CSA is Carroll Stuhlmueller, CP Distinguished Professor Emerita of Biblical Studies at Catholic Theological Union in Chicago. She was President of the Catholic Biblical Association of America (2000-1) and has been an active member of the Chicago Catholic/Jewish Scholars Dialogue for the past thirty years. For more than twenty-five years she has been the Old Testament book reviewer of The Bible Today, having been a member of the editorial board for twenty-five years. Five of these years she served as the magazine’s general editor. She wrote the weekly column The Word for America magazine (2002-5), reflections that have now been published by Paulist Press. She is currently working in the areas of biblical interpretation and biblical theology, particularly issues of peace, ecology and feminism.

Besides numerous articles, her publications include:

The Earth is the Lord's: The Bible, Ecology, and Worship (American Essays in Liturgy). Collegeville: The Liturgical Press, 1998.

Preaching the New Lectionary (Year B). Collegeville: The Liturgical Press, 1999.

Preaching the New Lectionary (Year A). Collegeville: The Liturgical Press, 2001.

People of the Covenant: An Invitation to the Old Testament. Franklin, WI: Sheed & Ward, 2001

Living the Word: Scripture Reflections & Commentaries for Sundays and Holy