This week, I moved into a new home. The one I’m leaving has been my home for longer than any other in my life. I learned to be a single parent there. I got my younger boys through high school there, which was an adventure itself. I learned to live alone there. And quite a few years ago, when my youngest son Joe moved home to help me after a surgery I was having, I learned how to live with an adult child. And when he married, I learned how to live with and form a brand new family with a loving daughter-in-law there as well. It’s been a great place – a great life. But lately there’s been another learning as well. And that learning is that as I approach my sixty-fifth birthday and get older, those steep, winding steps in that house will not be my friend for long. And that one bathroom on the second floor will not suffice for the long term either.

This first place of independence has been my refuge and resting place. But I realize that it cannot be so forever – mostly because of its structure. So over the past couple of years, I have begun to look at this wonderful home in a brand new light. My reading of the story of the Transfiguration is about how the disciples got to see Jesus in a new light too. It spurred on some connections for me with the events of my move that became the center of my reflection.

First, they walked up a high mountain. I think that since it was noted that the mountain was high, perhaps it wasn’t one of their usual places. I imagine that it wasn’t such an easy climb. I imagine that the disciples wondered what was in store for them when they got to the top. Jesus had called them from their lives to follow him and so far, so good. They had witnessed the feeding of multitudes. They had witnessed healings and raisings from the dead. They had heard teaching that both supported what they knew about being godly people and also turned the world upside-down with Jesus’ focus on the poor, marginalized, and outcast. What might this mountain top experience be for them? They didn’t know.

How many times in our lives are we forced to go up a mountain? We all face difficulties in life and we all step into the unknown too. Sometimes just when we think that things are going well or turning around, we’ll hit a bump in the road. Or – to use the mountain image – we encounter a crevice or a canyon that comes between us and our hopes and dreams. Sometimes it even comes between us and what we think God wants us to do. Sometimes it makes no sense. And yet we can’t avoid the mountains. For me it was facing one of life’s transitions and continuing to take one step after another.

Second, Jesus took very specific friends up that mountain with him: Peter, James and John. They were the same ones he took with him to Gethsemane. I was struck by the fact that even Jesus took his friends to share in this journey with him. Even the son of God knew that the gospel could not survive without the people who most closely knew the story -- the people who would still be here when he was no longer with them in the same way.

God – this Trinity of Persons – knows the value of relationship and shows us -- showed me -- that in my meditation on this story. I cannot imagine having pulled up roots after twenty-two years and moving out of my home without the support and love of a very few important people. The people who counseled and encouraged me were people who have been in my life a very long time (you know, the people that you might not be too embarrassed around if they looked in the closet as you moved). Those are the people that go with you up those mountains. In the way-too-many moments of frustration during the process of buying this house it would have been way too easy to give up or to fall apart. But God put my family and my friends in front of me to keep calling me forward. . .  and sometimes behind me to keep pushing me forward as well.

Third, the disciples were afraid when they got up there. When Peter, James and John went up that mountain they most certainly didn’t know what they were to encounter. They were afraid as anyone would be. But they loved Jesus and they followed him though they didn’t really understand his true nature at that point. And now he was on a mountain in a bright light, talking to Moses and Elijah. What do you do with that? How do you process that experience? They had to be wondering what this would mean for their future.

I can’t tell you how many times in the past months that fear grabbed onto me too in the process of buying my home. Can I get a loan? Is this really the right decision? And just as with his friends on the mountain, Jesus knows how hard life is and how hard it is to follow. But he reaches out and touches them and us with assurances that all will be well.

Finally, they had to come back down the mountain. They had to return to their ministry having had a glimpse of who Jesus is and having seen him in an entirely new light. They were changed. But was anything else?

I’ve never actually climbed a mountain, but I’ve seen one on TV. It’s clear that -- while it might not seem as hard going down as it is going up -- there are real dangers in coming down the mountain too. There are still the canyons and crevices to deal with. You could slip and fall. You could lose your footing on a rock. You could get lost, because when you’re up there in the rocks everything looks the same. And I also wonder if -- in the going up and the going down-- people might find it hard to breathe in that thinner air. I know that people have said to me many times in these past weeks, “Just breathe. . .Just breathe.”

For me, even though the truck is gone, I know the real work and adjustment is only beginning as I go down my mountain. I am wondering what life will be like and that’s a little unsettling. I know as I go to work each day I look pretty much the same and work looks pretty much the same. But the transformation of my living has changed everything just as the Transfiguration changed everything for Peter, James, and John (and I might add for Jesus as well).

As we continue through this season of Lent, I think the possibility for transfiguration -- for seeing Jesus in a brand new light -- is open to all of us. We will go on with our lives as they were, but transformed. For the disciples that would mean a new perspective on the mission they accepted in following Jesus. In my case, it is a new place to live and a whole new way of living. And today and over the next days, as you reflect on this reading, I invite you to be open to the possibility of transformation, to be open to the gift of climbing that mountain with Jesus and seeing Jesus -- and your life -- in a brand new light. 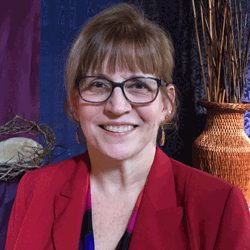 Laurie Jurecki is a certified lay ecclesial minister in the Diocese of Cleveland and has been involved in professional pastoral ministry for 30 years. She holds a Master's Degree in Theology from St. Mary Seminary in Cleveland.

Raised Lutheran, Jurecki chose to join the Catholic community in 1978. She is the blessed mom of 4 sons, mother-in-law of two fantastic young women, and delighted grandmother.

In addition to her role as a pastoral minister, Jurecki also serves as a board member of Women and the Word - a preaching initiative which "creates a welcoming and supportive environment for the preaching of the Sunday Lectionary from a woman's perspective."