On this third Sunday of Lent, the Church throughout the world gathers with those who recently have begun a journey of Christian faith to reflect on the story of a woman whose encounter with Jesus was so powerful that many others from her home town began to believe “because of the word of the woman who testified.”

We can all think of our own litany of those whose lives and words of wisdom have transformed our life journeys.  For some, those wisdom figures are close to home. But at other times, the persons and encounters which transform our lives are quite surprising. Just recently, while watching the movie Dead Man Walking with a class here at Notre Dame I was reminded that a man on death row was moved to confess his heinous crime and to seek forgiveness on the strength of the testimony of faith of another woman--Sr. Helen Prejean.  At the same time her words and witness moved a father whose son had been brutally murdered to turn to prayer and to struggle to forgive the man who had committed that unspeakable crime. On the strength of her testimony, and that of others who have joined with her, a country and a Church have been challenged to rethink and actively oppose the death penalty.  The book and the movie Dead Man Walking are all the more powerful because they also reveal the human journey of Helen Prejean, the many encounters which led her to speak–and which enable her to continue to speak-- her own word of testimony.

Today’s gospel offers insight into the transformation of another missionary disciple, a woman who would have been on the margins of Jesus’ world. Given the length of the narrative–almost the entirety of Chapter 4 in John’s Gospel-- there is a real temptation to abridge the story. We worry that people don’t have the attention span–or the time-- to listen to the full story in a world where we communicate by tweets, instagrams, and snapchat.  But when we cut out part of the story we risk missing something crucial. In the shorter form of the Gospel in today’s lectionary, for example, we hear the good news that many Samaritans came to believe in Jesus, but the edited text omits what prompted that conversion by eliminating this line: “They began to believe in him because of the word of the woman who testified.”

Maybe that crucial omission is enough to make us curious about the back- story of this missionary disciple. The Samaritan woman is the first of a series of women in the Gospel of John to proclaim the good news which they have seen and heard, a history of witness culminating in Mary Magdalene’s testimony to her encounter with the risen Jesus: “I have seen the Lord.”

The passage offered for our reflection today is an extended conversation that takes place between two strangers at the site of Jacob’s well in Samaria at about noon, the time of day when there is the most heat, but also the most light. Jesus, a tired and thirsty itinerant preacher , has stopped to rest there on his long journey home to Galilee. As the scene opens he encounters a woman who is going about her ordinary life, carrying out her daily domestic duty of coming to a village well to seek water, as do countless women around the world still today, if they are fortunate enough to have a reliable source of water.

Jesus initiates the extended conversation which follows, but it is the woman who asks the questions throughout the encounter.  He asks her for the most basic of human gifts, the one without which we cannot survive: “Give me a drink.” She is the one to ask the hard question, the “elephant in the room” so to speak: “How can you, a Jew, ask me, a Samaritan woman for a drink?”  She doesn’t go into detail but Jesus knows well the boundaries and hostilities which have come to separate these two descendants of Jacob who once shared a common heritage. By the time of Jesus, as the narrator reminds us, “Jews use nothing in common with Samaritans.”

That could have been the end of the conversation–from both sides, but neither one backs away or refuses to engage. Jesus takes the woman and her question–her challenge–seriously. At the same time, he shifts the conversation away from traditional expectations and clear boundaries and speaks instead of gifts freely given, living water, and a spring welling up to eternal life.  As the passage makes clear, however, we cannot recognize the abundant gifts offered by a stranger so long as we safely distance ourselves from them as “the other.” Instead, Jesus speaks words of invitation, reframing the woman’s challenge: If you knew the gift of God, and who is speaking to you, you would have been the one asking–for living water.

The woman’s next question can be read at one level as if she has totally missed the point when she returns to concrete details: you do not even have a bucket, the well is deep.  Once again, the conversation could have ended there. But her questioning is more profound than that and Jesus hears her deeper searching, her real question: “Where then can you get this living water?” And her unspoken question: Who is this stranger who seems to be redefining religious traditions, but whose words and whose very   presence speak to her at a deeper level?  Jesus responds in exactly that deeper key: “Whoever drinks the water I shall give will never thirst... the water I shall give will become a spring of water welling up to eternal life.”

The ambiguity about the woman’s thirst–her true desire–continues.  On one level she doesn’t want to have to keep coming back to the well; but on a deeper level, like all initiates in faith, her response involves more than she realizes: “Sir, give me this water, so that I may not be thirsty.”  So finally they have switched roles in the drama: “If you knew the gift of God and who is asking you for a drink, you would have asked him and he would have given you living water.”

But the story doesn’t end there in terms of the identity or mission of either one. The next exchange of dialogue is often taken to be the dramatic center of the plot.  Usually it is portrayed as some version of Jesus “calling out” the woman for her marital history of having five husbands and now living with another man. But the focus of the story is not on a sinful or loose woman, none of which is stated in the text, but rather on the deepening of this woman’s faith, her growing desire for living water.

Just as Jesus could see her more deeply, so too she now sees him with more of faith’s insight: “Sir, I can see that you are a prophet.”  She isn’t afraid to pursue what that might mean, even to raise the long-disputed question of which mountain –Gerazim or Jerusalem--is the sacred meeting place with God. Again, Jesus presents a new possibility: True worshipers will worship the Father in Spirit and truth; indeed such worshipers don’t seek God; God seeks them.

That new vision prompts the Samaritan woman to affirm her hope for an anointed one to come–the Messiah, called the Christ–who will “tell us everything” by teaching as Moses did.  Finally comes the real epiphany in the story as Jesus reveals to her what he has not yet said to any other disciple in this Gospel: I AM. “I am he, the one who is speaking to you.”

The chapter continues with an interruption from the male disciples, who have their doubts about what is going on, but, unlike the woman, they ask Jesus no questions. If we focus instead on the two thirsty pilgrims–the weary itinerant preacher and the woman whose faith tradition was considered suspect, it is clear that the dialogue between the two has revealed the true identity of each. Jesus gives no preaching commission to this new disciple, but he doesn’t have to.  Once the waters of Wisdom which she has longed for have welled up within her, she cannot keep from announcing what she has seen and heard. Like the other disciples, she leaves behind the life that she had known before, symbolized by her water jar--and returns to her own home town to announce the good news by inviting others to “come and see” and by raising another one of her powerful questions: “Could this man possibly be the Christ?”

Her encounter with Jesus, God’s Wisdom made flesh, empowered her to become a missionary disciple, preacher of the good news which she herself has seen and heard. No wonder Pope Francis turned to her in his Apostolic Exhortation The Joy of the Gospel to remind all of the baptized that “in virtue of our baptism, all the members of the People of God have become missionary disciples (cf. Mt 28:19)....  Anyone who has truly experienced God’s saving love,” the Pope says, “does not need much time or lengthy training to go out and proclaim that love” (Evangelii Gaudium, #120).

Like the Samaritan woman, Pope Francis ends with a challenge framed as a question, one intended for all missionary disciples–women as well as men, young as well as old, newly-initiated as well as long-time members of our communities:  “So what are we waiting for?”(Evangelii Gaudium, #120). 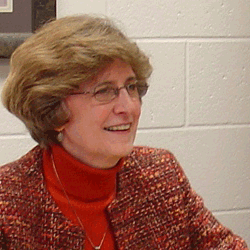 Mary Catherine Hilkert, O.P., a member of the Dominican Sisters of Peace, is Professor of  Theology at the University of Notre Dame where she teaches in the areas of  theological anthropology, fundamental theology, Christology, and feminist theology and spirituality. She is the author of Naming Grace: Preaching and the Sacramental Imagination (Continuum/Bloomsbury), Speaking with Authority: Catherine of Siena and the Voices of Women Today (Paulist), and coeditor with Robert J. Schreiter of The Praxis of the Reign of God: An Introduction to the Theology of Edward Schillebeeckx (Fordham University Press). In addition, she has published numerous articles on contemporary theology, spirituality, and preaching in both scholarly and pastoral journals.

A former president of the Catholic Theological Society of America (2005-2006), Sr. Hilkert is the recipient of three honorary degrees as well as the Washington Theological Union’s Sophia Award for Theological Excellence in service of ministry in 1997, Barry University's Yves Congar Award for Theological Excellence in 2011, and the Ann O’Hara Graff Award from the Catholic Theological Society of America in 2012  for her contributions to the integration of academic and pastoral theology with particular attention to the voices of women.  She has lectured and preached in Catholic and ecumenical contexts in the United States, Canada, Ireland, Australia, and South Africa.  Currently she is working on a book titled Words of Spirit and Life: Theology, Preaching and Spirituality.