Our Church has a tradition of Ordinary Times and I have frequently pondered what is truly an ordinary time; especially in today's world which seems to be full of extraordinary events, and extraordinary proclamations. Think the conflict in Syria. Think ice caps melting and political change…

For many if not most in our world today ordinariness is poverty, political tension and uncertainty. Where will the next meal come from? How will they survive? Millions --millions -- live ordinary lives displaced, away from their homes and countries, and frequently pining to return. Many are stuck on borders unable to go forward or back. That is their “ordinariness” at this time.

But Lent is not in ordinary time. Lent, for us, is a time set apart. Lent is out of the ordinary

Today in our First reading from Samuel, David, a shepherd boy, a seemingly ordinary brother and son of Jesse is lifted out of his ordinariness to be anointed king. Why David? We are told it is because God had looked into David’s Heart. His ordinariness had been transcended by God

In the Gospel of John neighbours struggle to recognize that the man in front of them, who now can see, is the same man that they have passed many times -- blind and begging on their roads. This man can now see because Jesus has opened his eyes. He has also been anointed.

So we have two stories of people being anointed – being brought to extraordinariness – in our readings today.

Both of these men are ordinary people who have been made extraordinary because God has looked upon them, looked into their hearts. They have been lifted out of their ordinariness and shown to others – shown to be extraordinary.  And their family and neighbours –you and I – have  been invited to see their extraordinariness.

Today the stuff of our lives is meeting what -- on the face of it --seems to be ordinary. And coming to know that there is an extraordinary story behind. The extraordinariness is unknown to us because we have not yet seen.

A recent campaign in our cities – A Day without Immigrants – invited us to consider what would happen if our bus drivers, waiters, surgeons and bankers didn't come to work for a day. The campaign highlighted how essential immigrants are to our daily lives and economy.

Many of these migrants have extraordinary stories to tell. Because of the conflict and poverty in their ordinary lives they have had to perform extraordinary feats, leaving home, study, and family and country to start life anew.

This week I met one such person in my local fruit shop. I had met him before. His name is Pascale. I had not seen Pascale for years. Pascale came to Australia from West Africa seeking political asylum. After some years he was granted refugee status. Today Pascale is married with three children. He plans to complete his Degree in Electrical Engineering this year. Pascale is an ordinary person who has accomplished extraordinary feats.

One of the invitations of this Lent, this extraordinary time, is to SEE those around us with new eyes recognizing, as God has, their extraordinariness. And in this Lent it is all the more important that we do this for our migrant and refugee brothers and sisters. Because in this time their ordinariness is really facing enormous challenge. It is God who can help us to recognize the extraordinary feats that they’re performing and the help that we can give. 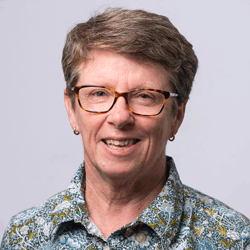 Dr. Maryanne Loughry is a Sister of Mercy and a member of the Institute of the Sisters of Mercy of Australia and Papua New Guinea (ISMAPNG) Mission and Ministry team. Prior to this Maryanne has worked in refugee work with the Jesuit Refugee Service commencing as a psychologist in detention centres and refugee camps in South East Asia in 1988. From 1996-2004 she was the Pedro Arrupe tutor at the University of Oxford Refugee Studies Centre from where she conducted research, programme evaluations and humanitarian training in the Middle East, Africa, the Balkans, South East Asia and the UK. Presently Dr Loughry is a visiting research scholar at the School of Social Work, Boston College and a Research Associate at the Refugee Studies Centre, University of Oxford. Dr Loughry is a member of the Australian Government's Minister of Immigration' Advisory Council on Asylum Seekers and Detention (MCASD) and serves on the Governing Committee of the International Catholic Migration Committee (ICMC). She is researching the psychosocial effects of climate-induced displacement in the Pacific, and was made a Member (AM) of the Order of Australia in 2010 for service to refugees.