A few weeks ago, during Holy Week, my son had a Stations of the Cross performance at school. Each of the classes took a station, and his kindergarten class was assigned #14 “The Burial of the Lord”. His role was simple - he just had to kneel down at the steps of the altar, put his face into his hands, and mourn the death of the Lord. There were no lines, no significant body movements or hand gestures. But, as I watched him walk with his class to the foot of the altar, kneel down, and cover his face with his hands, I was awestruck.

Just a little over a year ago, my son had undiagnosed hearing loss. For years, he struggled to communicate with us, and we struggled to understand him. And when asked to do anything in front of anybody, he would fold his arms, purse his lips, and refuse. Or sometimes, locked in confusion at what he was being asked to do, he would cry and scream. Unsure of what to do as many doctors and speech therapists had told us our suspicion of hearing loss was false, I figured perhaps he was just shy. So, I would try and encourage (and sometimes drag him) onto the soccer field or persuade him to say hello to people and just be polite. Nothing worked. A year ago, before we finally understood what was wrong, if I had to imagine my son going up with his class to the altar in front of hundreds of people and doing exactly what was asked - I would have said “never gonna happen.”

As a parent, or honestly just as a human being, when we are in a challenging season, it is so difficult to see an end in sight. Particularly when we are tired or worn down or just trying to keep everything together…

We can often feel like this particular period will never end.

I was “in the weeds” (as they say) for years, trying to navigate and understand my son with no true comprehension of why it was all so difficult. There were many moments when I sat and cried, mourned a loss I had no name for, and asked God to please take this confusion and suffering away.

In today’s first reading, the apostles have many questions for the Lord. They are about to be “in the weeds” themselves as their friend and mentor has left. They want to know what will happen and how they will handle all of it. But the Lord replies, “It is not for you to know the times or the seasons.” He explains that they will receive the power of the Holy Spirit and be given all the tools they will need in order to carry on the work in His absence. Still, as He departs from them, they remain staring up at the sky - possibly still waiting for direct answers, possibly still waiting for someone to take their confusion and suffering over the death of their friend away. The first reading ends with two men in white garments asking them to lower their eyes and move forward in faith. The second reading of Paul to the Ephesians continues this message of looking forward with hope. He says “May the God of our Lord Jesus Christ, the Father of glory, give you a Spirit of wisdom and revelation resulting in knowledge of Him.” He prays that they may have hope and trust in the One that has power over all things of this earth. He invites them to see beyond their limited vision and believe.

Belief is easier with reminders of God’s presence though, isn’t it? In the Gospel, the disciples hear from the Lord once again. He reminds them of His victory over death, and He blesses them. Having an encounter with Christ allows them to return to Jerusalem “with great joy” praising God. When I went to my son’s kindergarten class to pick him up after the Stations, his teacher leaned down and hugged him and said “I am SO proud of you! You weren’t shy, you didn’t hesitate! You were brave! It was incredible!” She, too, has been a witness to the resurrection inside my son.

As two bright blue hearing aids now adorn his ears, his world has opened up to all the possibilities around him. At first, he was hesitant, dipping his toe in the water as he experienced new sounds and interactions with people. He took his time adjusting to the world he had not previously known. And as he explored and learned and gingerly tried one new thing after another, we all got to witness Christ moving in him.

There is another thing I realized recently about this Christ moving inside of him - this new child who is more fully himself than ever before - he is very different from the child I first knew. As a parent, a wife, a sister, a friend... it is sometimes incredibly difficult to navigate change in another person. To be able to remove the lens of the person you have known and see instead someone anew. And not only see someone anew, but embrace the newness in them, and not linger on what has passed.

The disciples post-resurrection have something very important to realize about their friend Jesus… and perhaps this realization is difficult to wrap their minds around - their old friend has passed away. Jesus as they knew Him has died and He will never be the same again. He is not less special, He not less their friend, not less in love with each one of them... but He is something completely new . And at this moment, if the disciples fail to recognize this newness, if they dwell on what has passed they might miss so much ahead that is truly special. If they continue to raise their eyes up to Heaven instead of looking forward to the Christ in their midst, they will miss the point.

It is difficult for me, sometimes, to not respond to my son in the old ways. It is difficult for me to not just assume he will be shy or he will fail to respond to others or that a misunderstanding won’t result in hours of crying and screaming on both our parts. I am continuously trying to grow and change in my approach to him and the wonderful person he is and the wonderful person he is becoming. I know that if I fail to notice him as a continual creation of God, if I keep my eyes focused on what was instead of what is, I will miss that glimpse of Christ right in front of my eyes.

I pray that we all are given the grace to look into the eyes and faces of those around us and witness Christ alive in each encounter. 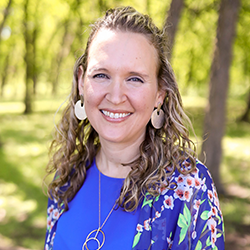 Gretchen is the Director of Campus Ministry at Jesuit Dallas. She graduated from the University of Notre Dame with a B.S. in Mathematics (‘98) and an M.Ed. (‘02) from their Alliance for Catholic Education program. Before assuming her current role at Jesuit Dallas, Gretchen previously taught Mathematics for almost a decade. As she entered her new role in ministry over eight years ago, she simultaneously enrolled in the University of Dallas’s Masters of Theological Studies program. Throughout the program, she noted how much she enjoyed writing and engaging with adults as well as teens in faith. When she graduated in 2016, she began teaching for the University of Dallas in their Certificate of Pastoral Ministry program alongside her full-time job as Director of Campus Ministry. She is also currently a member of the University of Dallas School of Ministry’s Alumni Board. Recently, Gretchen has engaged more in her passion for writing as a regular contributor to sites like IgnatianSpirituality.com and JesuitPrayer.org. A collection of her writings can be found at gretchencrowder.com.

She resides in Dallas, TX with her husband, three young sons, two dogs, six chickens, and a few fish.