In 1637 Puritan churches in the Massachusetts Bay Colony put Anne Hutchinson on trial, telling her, “You have stept out of your place.” She had dared giving religious instruction to men as well as women. Such teaching was not “fitting for your sex.”

In 1967  Kathrine V. Switzer stepped out of her place to become the first woman to dare to run the Boston Marathon. The marathon’s director, outraged at her audacity, darted onto the course and literally tried to shove her out of the race. But her boyfriend threw him a body block, allowing Kathrine to avoid her attacker and become the first woman to finish the Boston Marathon.

In the case of Mary Magdalene, church officials figuratively pushed her off the resurrection scene in the Gospel of John and resituated her in the story of an unnamed, sinful women in Luke 7. The Magdalene’s place in Christianity, it seemed, was not as a disciple of the crucified and risen Jesus, sent to bear witness to the resurrection, but as a repentant prostitute.

Over the ages, many legends and myths made the Magdalene a larger than life figure, often as a voluptuous woman evoking the dangers of female sexuality. The many variations of her mistaken identity as the penitent prostitute have so shaped the imagination that she is largely unknown by her rightful title: Apostle to the Apostles. Tragically, her mistaken identity also veiled women’s leadership in the early communities of Jesus’ followers.

To restore Mary of Magdala to her rightful place, we need to probe what the gospels say of her. Two texts are particularly important. The first, Luke 8:1-3 (cf. Mark 16:9), speaks of a group of women traveling with Jesus who “had been cured of evil spirits and infirmities.” Of Mary “seven demons had gone out.”

Soon afterwards he went on through cities and villages, proclaiming and bringing the good news of the kingdom of God. The twelve were with him, 2as well as some women who had been cured of evil spirits and infirmities: Mary, called Magdalene, from whom seven demons had gone out, 3and Joanna, the wife of Herod’s steward Chuza, and Susanna, and many others, who provided for them* out of their resources.

In the world of antiquity, demons or “unclean spirits,” were simply a given: language that sought to name the inexplicable, to identify conditions that ravaged people’s lives.  The evangelists depict Jesus as a healer to whom people “possessed” by unclean spirits were drawn.

What was it that “possessed” Mary Magdalene? Luke’s detail about seven demons suggests a disturbance not easily dislodged, perhaps something like severe depression. We might imagine that the Magdalene’s healing happened over time, maybe over months as Jesus worked with her, drawing from her whatever had kept her from living into her full humanity. Hers was the discipleship of a wounded healer.

A second key text is from the Gospel of John (20:1-18). Here Mary encounters the Risen Christ at the tomb, initially mistaking him for the gardener, only to recognize her Teacher when Jesus called her by name. He sends her to tell the disciples the astonishing news of his resurrection.

[Early on the first day of the week, while it was still dark, Mary Magdalene came to the tomb and saw that the stone had been removed from the tomb. 2So she ran and went to Simon Peter and the other disciple, the one whom Jesus loved, and said to them, ‘They have taken the Lord out of the tomb, and we do not know where they have laid him.’ ….

But Mary stood weeping outside the tomb. As she wept, she bent over to look* into the tomb; 12and she saw two angels in white, sitting where the body of Jesus had been lying, one at the head and the other at the feet. 13They said to her, ‘Woman, why are you weeping?’ She said to them, ‘They have taken away my Lord, and I do not know where they have laid him.’ 14When she had said this, she turned round and saw Jesus standing there, but she did not know that it was Jesus. 15Jesus said to her, ‘Woman, why are you weeping? For whom are you looking?’ Supposing him to be the gardener, she said to him, ‘Sir, if you have carried him away, tell me where you have laid him, and I will take him away.’ 16Jesus said to her, ‘Mary!’ She turned and said to him in Hebrew,*‘Rabbouni!’ (which means Teacher). 17Jesus said to her, ‘Do not hold on to me, because I have not yet ascended to the Father. But go to my brothers and say to them, “I am ascending to my Father and your Father, to my God and your God.” ’ 18Mary Magdalene went and announced to the disciples, ‘I have seen the Lord’; and she told them that he had said these things to her.]

We need to reclaim the Mary Magdala of these two powerful texts. We need to let her step into her rightful place as the “Apostle to the Apostles,” as a leader in the early community of Jesus’ followers, as a wounded healer who bore witness to the power of the Spirit, and as the first to proclaim the resurrection.

Jesus may have chosen the apostle Mary of Magdala to play a vital role in his community, but later generations found this too radical, too counter-cultural. So, Mary of Magdala, Apostle to the Apostles, had to be put in her place, lest women be seen as equals in making known the Gospel. Refashioning Mary as a repentant prostitute kept women from stepping out of their place.

So, sorrow tinges our remembrance. The Magdalene’s mistaken identity calls us to lament all that the church has lost over the ages by its repression of women’s leadership—a repression that continues to constrict the church and betray the ministry of Jesus.

And yet, we live in hope. Just as today we can’t imagine a Boston or New York Marathon—or any marathon--without women, so, too, may the day come that we can’t imagine the church’s apostles without picturing women alongside men.

May we let the apostle Mary Magdalene step into her rightful place in our church and world! Let us celebrate her as wounded healer, evangelist, and witness to the Risen One. May the Apostle of Apostles continue to bear witness that Christ is alive! 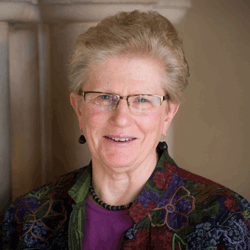 Mary C. Boys is the Vice-President of Academic Affairs and Dean at Union Theological Seminary, New York City; she is also the Skinner and McAlpin Professor of Practical Theology, and an adjunct faculty member of the Jewish Theological Seminary of America. Prior to her present appointment in 1994, she served for 17 years on the faculty of Boston College. A Seattle native,  she has been a vowed members of the Sisters of the Holy Names since 1968.

Boys received her master's and doctoral degrees from Columbia University in 1978 in a joint program with Union Theological Seminary. She has done advanced study at the Ecumenical Institute for Theological Research in Jerusalem, Israel, and is the recipient of honorary doctorates from Hebrew College-Jewish Institute of Religion (2004), The Catholic Theological Union (2007), The Jewish Theological Seminary of America (2011) and Gratz College (2012). She has been a Lilly Research Fellow and was a Henry Luce III Fellow in Theology for 2005. She was the was the recipient of the Ann O’Hara Graf award from the Catholic Theological Society of America.

Prof. Boys is the author of six books: Biblical Interpretation in Religious Education (1980), Educating in Faith: Maps and Visions (1989), Jewish-Christian Dialogue: One Woman’s Experience (1997), Has God Only One Blessing? Judaism as a Source of Christian Self-Understanding (2000), Christians and Jews in Dialogue: Learning in the Presence of the Other (2006), co-authored with Sara S. Lee; and Redeeming our Sacred Story: The Death of Jesus and Relations between Jews and Christians (2013).  Among her edited books are Seeing Judaism Anew: A Sacred Obligation of Christians (2005) and the co-edited volume Christ Jesus and the Jewish People Today (2011).