“Howling and gnashing of teeth”, corporal punishment and biblical verses that are omitted from the readings because they are the opposite of our idea of the Good News - this is what we encounter in today’s uncomfortable and difficult texts.

But perhaps drastic words are just right in a summer when drastic images go around the world: The picture of drowned two-year-old Valeria with her father in the Rio Grande, the picture of Captain Carola Rackete being taken away by the police after having rescued refugees in the Mediterranean, the pictures of fires and drought on the one hand, floods on the other. And so on.

In fact, these unwieldy texts have something to say in this situation.

Both readings are aimed at people in communities who have to deal with disappointed expectations. The final chapters of Isaiah respond to the disillusionment of the post-exilic period. There is the longing of the people for the promised salvation and the disappointment about its absence. The writer answers this question in a visionary way. Because the prophetic perspective broadens into a universal perspective here: YHWH is not only the God of Israel, but the God of all nations: they will come and see the glory of YHWH’s presence (kabod). Thus, salvation is also for the others, those who are ‘other’ or those who come from far away. And perhaps we can say that salvation also comes with and throughothers! For they are involved in the new creation, they contribute something.

The author of the Epistle to the Hebrews also tries to encourage a disappointed community: The parousiadoesn’t happen, doubts are spreading. Of course, this is not our situation. And the comparison that believers have to endure the punishment of the Lord like children the punishment of their parents is difficult to bear for us today. In fact, the text is only accessible to us to a limited extent.

But we also know situations of disappointed expectations and hopelessness – in private life and in public affairs. In this situation, the reading offers a motivation to persevere, and this motivation is a form of faith, faith as basic trust: That we are held. That there is hope for a future. That it will go on. Somehow.

On this basis, the Gospel then introduces the moment of decision. Trust is important, but something must be added.

The Gospel of the day is preceded by two other narratives about the kingdom of God: that of the mustard seed and that of the leaven. They talk of slow growth and mercy, while our text emphasizes the hard cut. We find both in Luke.

Well, in today´s difficult Gospel the question of decisiveness arises. Being a Christian is not simply a state of mind. It requires a decision – how we want to live as Christians. This decisiveness is demanded with force. Mustard seed and leaven fade next to these words. Whatever we are waiting for, will not happen by itself.

When the Gospel says,  all the prophets will be in the kingdom of God and you yourselves cast out, the word "you" hits us in our comfortable security: we, the righteous, who consider ourselves on the safe side, we have done wrong? Me? I always have..., I always try..., I belong to the good ones!  - But it is not that simple. Often enough we ignore the injustice in which we participate. These are those small trifles in everyday life, when we lie to our advantage, when we hurt or exclude others. The Gospel very vividly defines the lack of access to the kingdom of God as non-participation. What follows from this for the dawn of the kingdom of God in our time, when so many are denied participation and belonging?  And how do we participate in it?

And this leads us to the question of our involvement, now. We often only half-heartedly try to solve the great problems of our time: migrants - yes, but not in my neighbourhood! Fight climate change - of course, as long as nothing changes for me. And anyway: I can't change it on my own.

It is an important to recognize that we are all entangled in – also structural – guilt. But it would be wrong to conclude from this that we will not be able to change anything, and that consequently it does not matter if we do anything at all.

To say it with Oscar Romero:

We cannot do everything,

and there is a sense of liberation

This enables us to do something,

and to do it very well.

Here again faith as trust comes into play: It is a  liberating faiththat enables us to act, to do something – knowing that we can´t do everything.

And besides: we are not only entangled in a web of injustice and guilt, but also in a web of relationships. We live in communities. The first reading reminds us that these communities are not defined, once and for all (and excluding others with their stable boundaries), but they can change. Isaiah suggests that those from distant nations and islands become brothers and sisters. By acting together, different people build an inclusive community.

We can form communities across borders; enrich one another; work for common goals, in solidarity.

And it's actually happening: In the initiatives that work with refugees, or where people are resolutely committed to sea rescue. In groups that protest against climate change, or where alternative lifestyles are implemented. And wherever people fight against exclusion and the denial of respect to others.

Examples for the dawn of the kingdom of God - based on conscious decisions. 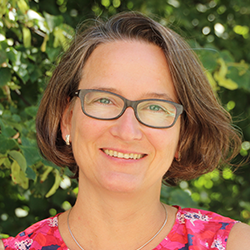 Michelle Becka, Prof. Dr., is professor of Christian Social Ethics at the Faculty for Theology of Wuerzburg University, Germany.

She studied theology in Tuebingen, Germany, and also for one year in Cochabamba, Bolivia. Michelle earned her Ph.D. in Christian Social Ethics in Tuebingen with a work on interculturality and recognition and her habilitation in Mainz on Ethics in the Penal System. She is teaching Christian Social Ethics in Wuerzburg and she is academic dean of her faculty. Her research interests are foundations of Social Ethics, Ethics in the Penal System; Human Rights Ethics, Ethics and Migration; Ethics and Interculturality and Latin American theology.

Michelle lives with her family near Frankfurt, Germany.