I became a Catholic at the ripe age of 22. It may have been the excitement of that Easter vigil opening bowl of fire and the thick smell of incense weighing down the room, but while we were singing the litany of saints, I had a vision. Activated by our voices, saints appeared out of the parish walls ‘90s video game style, a cloud of witnesses swirling around us.

This cloud has traveled with me ever since. About 5 years ago, I visited El Salvador through my work at Ignatian Solidarity Network to walk in the footsteps of the Jesuit martyrs and their companions at the University of Central America. If you’re not familiar with their story, look them up, but the very short version is that in the midst of a long civil war and government oppression in the ‘80s, they spoke truth to power and were eventually killed for it.

For years, I had looked up to the Jesuits and their companions as heroes. They were part of my cloud. But there was a moment when I was visiting the memorial dedicated to them that I came across their robes and slippers and envisioned them kicking back for a football game not as ethereal heroes, but as humans. They were men and women of flesh and blood, part of the here and now, running the race that was laid before them with their eyes fixed on Jesus.

Dorothy Day, an extraordinary woman and founder of the Catholic Worker Movement, was famously quoted saying, “Don’t call me a Saint. I don’t want to be dismissed that easily.” While I was just as excited as many to see her cause taken up for canonization, her words have stuck with me. When we heroize people, it gives us an easy out. They become the video game characters I imagined swirling around me, untouchable, imperfectly perfect. I’m no Dorothy Day, what can I really contribute to this world? But Paul isn’t letting us off the hook so easily in the second reading. Like the great cloud of witnesses, we too are asked to rid ourselves of our sins and burdens and persevere in the race that lies before us, eyes fixed on Jesus.

And so I ask you, who is part of your cloud of witnesses? When have you dismissed their example because of their saintliness instead of seeing them as fully human?

And what is this race we’re supposed to be running? It looks different for each of us, and this is where paying attention to the Spirit and discernment come in, but the first reading and gospel have laid out some guidelines.

First, we are called to action. In the first reading, after hearing that the prophet Jeremiah has been condemned to a slow death by starvation, the court official advocates on Jeremiah’s behalf and saves his life. The story keeps it simple: when confronted with injustice, we are called to respond.

We do this at the Ignatian Family Teach-In for Justice each year. 2,000 students and people of faith spend a weekend in D.C. listening to prophetic speakers on topics ranging from immigration, to racial justice, to the environment. The following Monday, participants take to Capitol Hill to respond to what they have learned and advocate with and for people who are marginalized by injustice.

Students consistently note that the Teach-In is transformative for them. I firmly believe that is because we give them an opportunity to put their faith into action. When we hear, see, feel, respond to injustice, there is transformative potential not only for the world around us, but for our own hearts as well.

The gospel reading pushes us further. Anyone tied to Jesuit education may have smiled upon seeing Jesus’s words: “I have come to set the earth on fire.”

“Go forth and set the world on fire,” the words attributed to the founder of the Jesuits, St. Ignatius of Loyola, are emblazoned on everything from coffee mugs to lamp posts on Jesuit campuses across the country. For good reason, the phrase is exciting and reeks of possibility. But the jarring part of the reading, and I think the most telling part of it lies in what follows:

“Do you think that I have come to establish peace on the earth? No, I tell you, but rather division.” Fathers against sons, mothers against daughters. Woof, Jesus. But as I think about the great cloud of witnesses, one of the things they share in common is their willingness to speak truth to power, some even to the point of their own death.

As followers of Jesus, we are called to make people uncomfortable, ourselves included. As someone who is very comfortable with the peace and love Jesus, this has always made me squirm. But I find great solace in the fact that Jesus was anxious too. He says, “There is a baptism with which I must be baptized, and how great is my anguish until it is accomplished!” We were never promised an easy journey, race, whatever you want to call it. But at the end of the day, we are called to be part of it.

And so I ask you, who are the Jeremiahs in your community, in the Church, in the news, in the world, calling you to respond to injustice? Where is the Spirit gently or perhaps forcefully guiding you in the race laid before you?

Finally, a word on hydration. Some of my colleagues are obsessed with it. Stomach ache? Drink some water. Toe hurt? Drink some water. And while sometimes I roll my eyes at them while chugging a glass, my experiences with my annual brash decision to run a half marathon have taught me that hydration really is the key to surviving the long race. I once asked a busy Jesuit how he kept up with his life of accompaniment. He said, “You can always tell when a minister’s faith life has dried up. They dry up too.” There’s a reason we are instructed to “persevere...while keeping our eyes fixed on Jesus.” In order to stay in the race, we must continually drink from the well that sustains us, to walk with the Jesus who loves us and knows us, who hears our cries. 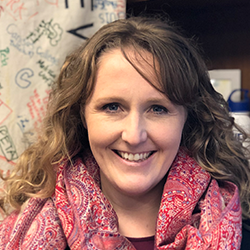 Kim Miller has served as the Program Director for Ignatian Solidarity Network since 2011. After graduating from Gonzaga University with her degree in marketing and broadcast studies, Kim spent two years serving in the Jesuit Volunteer Corps. During her years of service, Kim worked with teens with developmental disabilities at STRIVE in South Portland, ME and served as the outreach coordinator for Jesuit Refugee Service/USA in Washington, D.C. Through her work at Ignatian Solidarity Network, Kim develops retreats and conferences focused on the nexus of faith, leadership, and social justice and is constantly humbled by the authenticity and hunger for a “faith that does justice” in the students and people of faith she encounters in her work each day.

A Californian at heart, Kim lives outside of Cleveland, OH with her husband Jeff and fuzzy dog Lucy, and they’re all looking forward to the arrival of their first child this fall.