Today’s first reading from Sirach begins “Conduct your affairs with humility, and you will be loved more than the giver of gifts. Humble yourself the more, the greater you are, and you will find favor with God.”

In the gospel, Jesus offers two lessons to a group gathered at the home of leading Pharisee on the Sabbath. In the first, he advises the guests about how to choose their seat at a wedding banquet-- choose the least desirable seat to avoid being asked to move.

Then, he tells the host how to decide who to invite to a banquet. Include people who could never reciprocate your generosity: the poor, the crippled, the lame, the blind, presumably not who was gathered at the table that day, and eventually, at the resurrection, you will be repaid. He says: “Everyone who exalts herself will be humbled and everyone who humbles herself will be exalted.”

Simple, really. Humility is a vitally important part of the spiritual life. I know its value in my own life. And the people I admire most are marked by this virtue.

But the more I began reflecting on this week’s scripture, something continued to bother me-- the part about being loved because of this humility, about finding favor with God, about being exalted…

I’ve known plenty of humble people who were taken advantage of, trampled upon, and seemingly forgotten, haven’t you? In fact, there have been plenty of times I have felt alone or forsaken myself, when my prayers were not answered as I had hoped. And what does favor with God and exaltation actually look like?

I asked a few college students I work with what they thought of humility-- and most of them referred to advice their parents had given them: don’t be too arrogant, be respectful, and know your place.

Humility can be defined as “a modest opinion of one's own importance”; very much in line with what the students shared.

But there’s another definition that I find even more compelling. The word humility is derived from the Latin word humus, meaning of “the earth,” as in the dirt.

Humility can be defined as “grounded.” It makes me think of an unassuming, dignified tree with deep roots, able to withstand heavy winds, periods of drought, and other challenges.

After we had exhausted the conversation about humility, the students started talking about the word “humiliation,” and their reaction was almost visceral. Who wants to be humiliated?

I assured them they were not off track-- “humiliation” shares the same Latin root as humility, and can be defined as “a painful loss of pride, self-respect, or dignity.”

The refrain of today’s psalm is: “God in your goodness, you have made a home for the poor,” and the verses name several groups that are marginalized in our society: orphans, widows, prisoners, and a catch all: “the forsaken,” reinforcing how God has special concern for the most vulnerable, for people without status and power, for people who are suffering and feel forgotten and alone.

But what about those times when God doesn’t provide a home for the poor? Or comfort for the widow and orphan?

I thought of unhoused friends who I had come to know while working at a soup kitchen who lost battles with addiction, subsistence farmers in drought-ridden lands without enough food to feed their families, people on death row, isolated elders, people perishing in the desert seeking to build a better life for their children, innocent people killed because of the color of their skin every day in our country, children gunned down while sitting in their classrooms, people abused, battling disease…I thought of all the times my prayers for loved ones had not been answered in the ways I had hoped…

We live in a society that emphasizes the importance of gaining status, of obtaining power and wealth, of being in control of your own destiny. Along with all of this, there is a false sense of scarcity: there is only so much power, status, wealth, and even health to go around, so we must fight to carve out these things for ourselves.  And, if we’re doing well, it’s hard not to take credit for our “successes” as our own.

But, none of us is in control of everything that happens to us, of where we were born, who our families are, the color of our skin, or how cells behave in our bodies.

And it is only in becoming vulnerable ourselves, coming to terms with our own lack of control and dependence on God, and sharing this vulnerability with others, that we are able to see the complex, multi-faceted, beautiful face of God and begin to build the world God desires for us.

Jesus himself was a humble man-- he had none of the markers of greatness our society teaches us to value. He had no wealth, no political power, no social status, no credentials. And he died a humiliating death. And yet, he is our best model for what it means to be fully, wonderfully human.

Humility, being grounded and unclouded by our own egotistical concerns, allows us to see the bigger picture, outside of ourselves, by being open to being changed by the experiences of others around us.

I think that Jesus chose to share the lessons of how to be a guest and how to be a host to illustrate humility in action, and to show how this ultimately has the power to lead us to a deeper and more fulfilling life.

Jesus is urging us, when we are invited as guests into a situation, to begin with a posture of openness to what others are bringing-- when in doubt, assume that others are more in need of special care than we are, and try to offer that care. Not because your own struggles aren’t real, but because everyone is struggling, and even in our weakness, we have something to offer others.

When we are put into the position of being host, when we have been given the resources-- financial, emotional, physical, or otherwise-- to be able to welcome others, we should seek out not those who are the easiest to welcome, but those who are most in need.

And I don’t think the only motivation is eternal reward: I think the “reward” comes so much sooner than that.

In widening our worlds, in opening our hearts, our lives are infinitely richer and more fulfilling here and now.

As I was praying about this week’s scripture, a quote from Mother Teresa kept coming to mind: “I can do things you cannot, you can do things I cannot; together we can do great things.”

We are ALL needed to build the world God desires for us-- may we be given the courage and grace to be God’s hands and hearts in the world.  Amen. 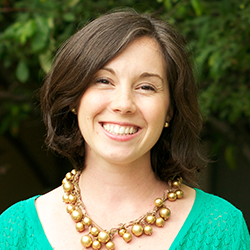 Mary Lou Bozza is the Assistant Director of the Center for Ministry and Service at Regis College in Weston, Massachusetts. Mary Lou and her husband Gary are the parents of a delightful toddler, and spend much of their time surrounded by their large Irish-Italian-Chinese-Lebanese family, enjoying delicious food and each other.

After growing up in central Connecticut, Mary Lou attended Boston College, graduating with a degree in Theology and Hispanic Studies. Her senior thesis about Dorothy Day is part of the Dorothy Day archives at Marquette University.

Following graduation, she taught high school theology and urban studies as a Jesuit Alumni Volunteer in Chicago before pursuing a Master of Divinity degree at Yale Divinity School. She later served as a Campus Minister and Theology instructor at St. Louis University, International Relations and Delegations Coordinator at FUNDAHMER in El Salvador, Director of Confirmation and Youth Ministry at Good Shepherd Parish in Wayland, Massachusetts, and the Director of Development at Haley House, a Boston non-profit founded in the Catholic Worker Tradition.

Mary Lou is also a founding member of FACES (Faith in Action with El Salvador), a U.S. non-profit established to support community organizations in El Salvador. Mary Lou's writing has been published by Liguori Press, various Catholic newspapers, and in a collection of essays about feminism and faith.