Blessings and thank you for sharing in reflection on the readings of the 22nd Sunday in Ordinary Time.

"This people honors me with their lips, but their hearts are far from me; You disregard God's commandment but cling to human tradition."

When I was in Iraq, visiting Christian women and children who had fled ISIS, the Iraqi and the U.S. governments and the law had failed these women and children and their families.  ISIS killed, raped, and stole, and justified their behavior as being legal by the rules of their state.  The Dominican sisters ministering to these communities encouraged the children to draw pictures and write about their hopes for the future, as a way to help them process their trauma and heal. One boy's drawing said "When I grow up I want to be a policeman and help people, because the police did not help me and my people." One girl's drawing said "When I grow up I want to be a lifeguard and save people from drowning." Her friends and family members had drowned as refugees fleeing ISIS, while the governments of the world turned them away.  As a mother of three, these children's stories broke my heart.  While it is easy to say the ISIS's law is not just, there was plenty of injustice and blame to go around. The Iraqi government was not able or willing to protect Christian communities from ISIS.  The U.S. government invaded Iraq, creating the conflict, then turned away the refugees fleeing the war.  The U.S. government, using our tax dollars, brought in guns and money that were seized and used by ISIS to kill innocent civilians, decimating Christian and other communities.  Human law allows the killing of innocents, while God's law does not allow these actions.

These failures of the law are not just evident in Iraq. Around the world, there are disputes between the leaders who make "The Law," and others in society who feel the government is being unjust, is lying or stealing or murdering or does not treat them as they should.

In the U.S. and other developed countries, we do not live in warzones, but the questions raised by today's readings remain, because human law is often not in sync with God's law.  The Black Lives Matter movement, the Me Too Movement, the Pro Life movement, are all reminders that the law often does not protect the most vulnerable. For example, separating migrant children from their parents, and imprisoning poor people and refugees for trying to save their families, this policy may be legal, but it is not moral.  It may pass muster for human law, but it violates God's law. How can we spot the differences, and how can we reorient ourselves to God's way?  Today's readings remind us.

In the first reading, Moses brings the people the Commandments, and urges them to observe them carefully.  By practicing God's law we will be a light to the world, attracting others.

What is just about the Mosaic code? The commandments are a practical code for peace, for social cohesion, for right relationship with God and other people.  The law is very practical, telling us to love God and love one another, and giving us specific instructions for how to live in right relationship, by not lying, stealing, killing, not envying.  This is a recipe for both justice and peace, for social cohesion. Nothing breaks the peace quite like lying, killing, stealing, and raping.

The Psalmist reminds us that by doingjustice we walk with God, by doing, living justice, not by thinking about it or preaching it but by practice, by how we treat others. The Second reading makes the same point, urging us to be "doers of the word and not hearers only, deluding yourselves."  How will we be doers of the word? Our actions will be measured by how well we treat widows and orphans, the most vulnerable among us.

Jesus makes the same point in the Gospel of Mark.  The religious and legal leaders of the day constantly criticized Jesus for not following the laws, but Jesus chastised them for forgetting the heart of the law.   On television, the Hallmark Channel advertises itself as being the "Heart of TV," but Jesus is telling us the hallmark of the law is its heart, whether it acts with God's heart, with love for the poor and vulnerable, for women and children.

How do we know if we are disregarding God's heart, God's law, and following human tradition instead? The measure is how we are treating the least of these.  Are we living in right relationships? Or are our hearts full of, as today's readings say, "evil thoughts, unchastity, theft, murder, adultery, greed, malice, deceit, licentiousness, envy, blasphemy, arrogance, folly." Peace, love, law and justice go together.  When we follow a narrow idea of "law and order" without heart, we violate God's law.  Jesus said if we are not walking with the widow and orphan and poor, like the refugees and the children of Iraq, and the families separated at the border, then our hearts are far from God. 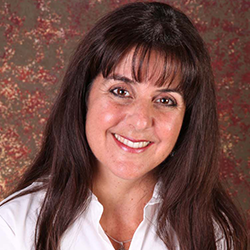 Dr. Maryann Cusimano Love is a tenured Associate Professor of International Relations in the Politics Department of The Catholic University of America in Washington, DC. She serves on the U.S. Catholic Bishops' International Justice and Peace Committee, and the Advisory Board of the Catholic Peacebuilding Network.  She has served as a Fellow at the Commission on International Religious Freedom, on the Core Group for the Department of State's advisory committee on Religion and Foreign Policy, and as an Ethics Fellow at the U.S. Naval Academy. Dr. Maryann Cusimano Love lives on the Chesapeake Bay outside of Washington, DC, with her husband Richard and their three children, Maria, Ricky, and Ava, who inspired her New York Times best-selling children's books, You Are My I Love You, You Are My Miracle, You Are My Wish, You Are My Wonders, and Sleep, Baby, Sleep.  Her international relations books include books on Just Peace, Global Issues Beyond Sovereignty, Under Caesar's Sword, "What Kind of Peace Do We Seek?" in The Ethics and Theology of Peacebuilding, "Trust and Peacebuilding" in Living in an Age of Mistrust, and "Catholic Women Peacebuilders," in Women, Religion, and Peacebuilding. An alumna of the Johns Hopkins University (PhD), the University of Texas at Austin (MA), and St. Joseph's University in Philadelpha (BA), Dr. Cusimano Love is a frequent speaker on international affairs issues, is a columnist for America magazine, and supports the Holy See Mission at the United Nations.